What about the Texas Bar Registration? 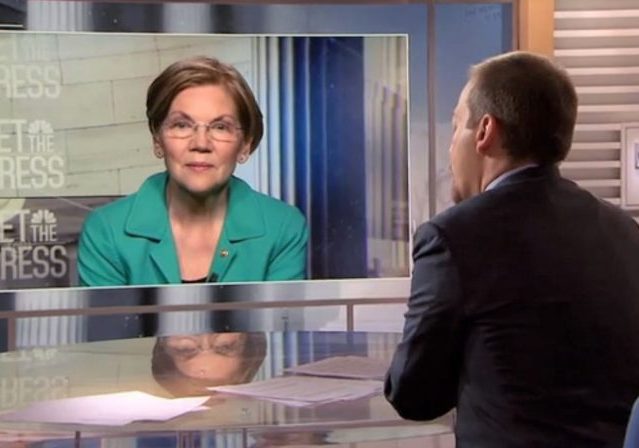 The mainstream media must sense that Elizabeth Warren is a wounded candidate due to her Native American controversy.

And it may be time for them to turn on her.

The Washington Post yesterday published an image of Warren’s 1986 Texas State Bar registration, in which she listed herself as “American Indian” under “race”. 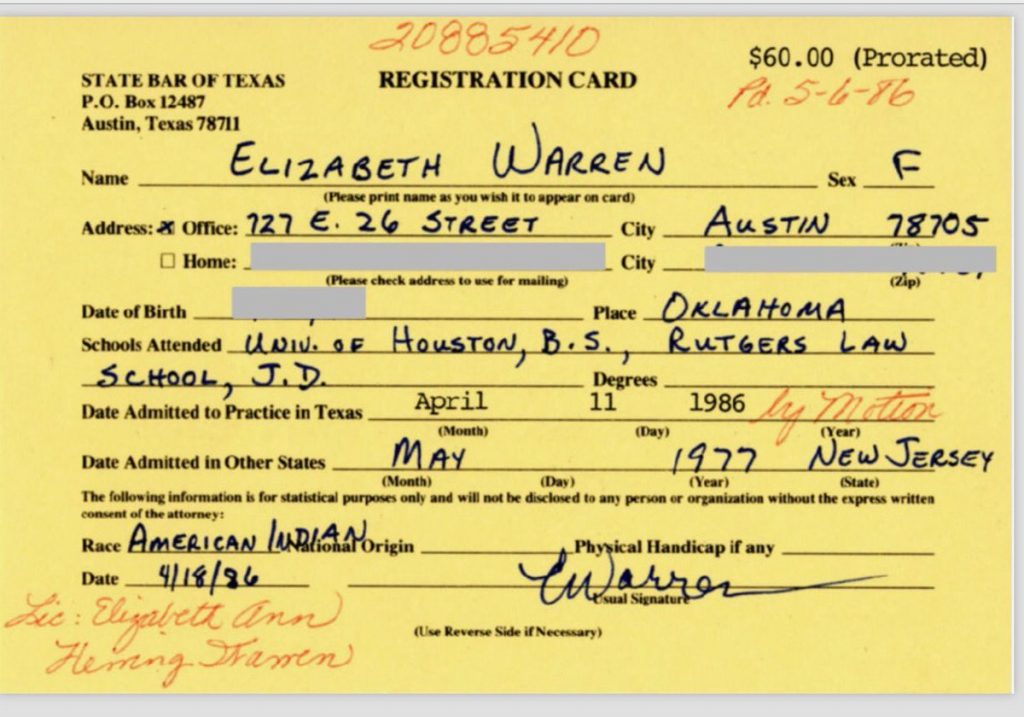 This was good sleuthing by WaPo, though they buried the finding in an article about Warren apologizing the the Cherokee Nation. Nonetheless, credit where credit is due.

The Texas Bar card was very damaging because it’s part of the drip, drip, drip of Warren’s obfuscation as to what she did with her false claim to be Native American. Warren never volunteers information, she only reacts when others have uncovered her use. She only tells you what she thinks you already know.

Warren never disclosed that she signed up for law faculty directories used for hiring starting in the mid-1980s as Native American until her listing as a “minority law teacher” was uncovered by George Mason Law Professor David Bernstein. Only then did Warren fess up, with the absurd explanation that she signed up that way in the hope of meeting others like her. (That explanation is false, as I explained in 2012, because the faculty directory only listed people as “minority law teachers,” without disclosing what type of minority status they claimed, so no one would have known Warren was claiming to be Native American. So the faculty directory was not a way for her to meet other Native Americans.)

The WaPo story is more evidence for the fear Democrats have that the Warren narrative will be dominated by the Native American controversy much like Hillary’s emails dominated her campaign.

For Warren, there can be no assurance that all the shoes have dropped, something Democrats should fear should Warren become the nominee. There is no scrutiny like the scrutiny and oppo research that takes place in a presidential campaign — I would not be surprised if both Democrat (for other candidates) and Republican operatives are shaking the bushes in Oklahoma to see what other dirt there is on Warren using her claim to be Native American, and the veracity of her family lore stories.

I alway had the suspicion that Warren didn’t run in 2016 against Hillary because the Clintonworld machine either had the smoking gun to use against Warren, or would have gone to great lengths to find it.

Now that she’s politically wounded, the mainstream media is starting to do their job. The WaPo article is one example.

Perhaps a better example of the turning of the screw is that after the WaPo disclosure, Meet the Press tweeted a link to an interview on Meet the Press in March 2018, in which Warren denied ever using her claim to be Native American for any purpose.

FLASHBACK: In March 2018, @SenWarren discussed her Native American heritage on #MTP and said she “never used it for anything. Never got any benefits from it anywhere.” 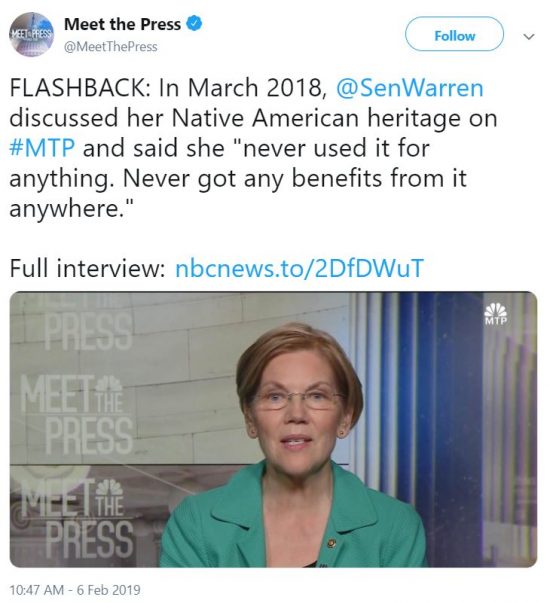 That’s quite a find for MTP to tweet out. That interview was best known for Warren claiming she “is not” running for President. You have to be looking for it to find the nugget of Warren denying she ever used Native American status “for anything.”

If this is a sign the the mainstream media had lost confidence in Warren’s ability to defeat Trump, then Warren is done.

According to an article in the Daily Mail, Warren was included in Harvard’s federal Affirmative Action records until 2004.

Warren listed herself as a Native American in the Association of American Law Schools Directory of Faculty from 1986 – 1995.

Although Warren stopped listing herself as a Native in the Directory after Harvard hired her, Harvard continued referring to Warren as a minority faculty member.

In a 1996 article in the Harvard Crimson, Harvard spokesman Mike Chmura said that although many of Harvard’s students thought the law school had no minority faculty, that was not true because Professor of Law Elizabeth Warren is a Native American.

Harvard knew that Warren claimed to be Native American when it hired her, and Harvard hired her at a time when it was being widely criticized for not having any minorities on its law school faculty.

Warren started claiming to be Native American in the ’80’s, when law schools were desperate to boost their minority hiring stats. Everybody looking for a law school faculty position in the 80’s and 90’s knew that their chances of getting hired were much better if they could claim minority status.

We all know what Warren did, and why she did it. She’s a liar and a fraud, and now she’s caught, and she needs to just slink away.

“Harvard hired her at a time when it was being widely criticized for not having any minorities on its law school faculty.”

So she is an affirmative hire, now that is funny. Considering that many, perhaps most, affirmative hires are comparative slower than average, I am now wondering if she also falls in that category.

She must be wicked smart to be tenured at Harvard Law School. All of the other professors have much more impressive CVs, so Warren must have been hired for her towering intellect. /sarc off

You can’t be partly pregnant nor sometimes honest. How many lies does she have to tell before nobody listens to her anymore?

I just want to see here College Financial Aid Application.
If she lied on that, she defraud for real money.

Except for academic applications, bar associations, and that little job she had at Harvard (and probably anything else that could give her a personal, financial, or professional advantage). But apart from that, nothing.

Harvard continues to list Warren as an emeritus professor. It really ought to repudiate her and strip the title. Because it won’t, Harvard needs to change its motto to:

notamemberofanyorganizedpolicital in reply to JustSayN2O. | February 6, 2019 at 1:42 pm

Maybe Harvard alumnus Professor Jacobson can do something about that.

We could start with a petition for her removal at the very least.

Serious question:
Does the ‘prorated’ next to the $60:00 fee at the upper right part of this registration card mean her fee could have been discounted for some reason?

It probably means that the date of her submitting the registration does not match the date of the standard renewal period, so she pays an amount to cover whatever time is left and then will pay the full amount at the time of normal renewal. Many organizations with hard terms of membership do this. Others have a “rolling” system where one’s renewal is based on when they join.

Disclaimer: I am not a fan of Fauxcahontis by any stretch, but I think criticism of anyone should be based on things deserving criticism.

I agree with your disclaimer. Thanks for the info.

She’s a lawyer. She ought to know what that means.

Looks like many dems do not want her running. When MTP takes a dump in your golden meadow, you just know the butterflies are going to attack next.

. . . she signed up that way in the hope of meeting others like her.

Deceit and lies. Hmmm. Sounds like another failed democrat from Arkansas/New York

She’s the definition of cultural appropriation.

Warren suggests other documents might come out on which she claimed to be Native American.

She claimed never to have used Native American on documents.

notamemberofanyorganizedpolicital in reply to Petrushka. | February 6, 2019 at 6:40 pm

Just too good not to pass on.

It’s pretty stunning that all the SJW’s can viciously attack a teenager in seconds for “disrespecting an elder Native” but not say shit about an old, rich, white woman disrespecting and pillaging the entire Native community???? #ElizabethWarren

We knew she was a documented liar.

Now she may be a repeat offender and likely committed fraud.