Kamala Harris Running for President in 2020

Kamala Harris Running for President in 2020

Harris touts her prosecutor career, but that has recently come under scrutiny for not being progressive enough. 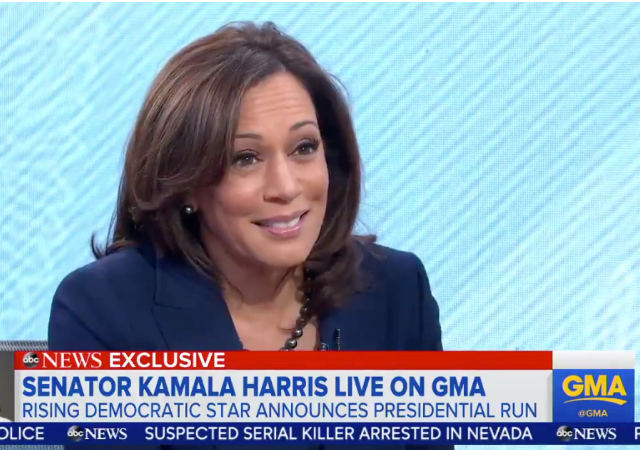 For once, something from anonymous sources came true! California Democrat Senator Kamala Harris has officially thrown her hat into the 2020 presidential race.

She made the announcement on Good Morning America.

BREAKING: @KamalaHarris announces this morning on @GMA that she will officially be running for president in 2020. “I’m very excited about it.” https://t.co/W1vUNMab63 pic.twitter.com/Jhklmo3Oa9

JUST IN: @KamalaHarris on announcing she will be running for president in 2020: “I feel a responsibility to stand up and fight for who we are.” https://t.co/qUX1sERxxZ pic.twitter.com/NcSHFTRIny

“I feel a responsibility to stand up and fight for the best of who we are, and that fight will always include — as one of the highest priorities — our national security,” the Democrat from California said when asked what qualifies her to be president, referencing the government shutdown over clashes of how to handle border security.

Harris used her announcement to talk about her career as a prosecutor and her dedication to keeping people safe. She also discussed several ways she will increase national security, but made no mention of President Trump’s proposed border wall.

“I am a career prosecutor,” Harris said. “My entire career has been focused on keeping people safe. It is probably one of the things that motivates me more than anything else. When I look at this moment in time, I know that the American people deserve someone that’s going to fight for them… and put them in front of self interest.”

I believe we all knew Harris would do this after California elected her as senator in 2016. She’s used her term to push herself into the center of attention and do anything she can during Senate confirmation hearings to build up her profile.

I doubt any of us will forget Harris’s behavior during the hearings for Supreme Court Justice Brett Kavanaugh.

The announcement comes a few days after people on the left scrutinized Harris’s time as San Francisco district attorney and California attorney general. From Fox News:

The perception that Harris, 54, acted as a “progressive prosecutor” during her tenure as the district attorney of San Francisco and then California’s attorney general contradict her actions, a University of San Francisco associate law professor argues in an op-ed piece.

“Time after time, when progressives urged her to embrace criminal justice reforms as a district attorney and then the state’s attorney general, Ms. Harris opposed them or stayed silent,” Lara Bazelon writes in the New York Times.

“Most troubling, Ms. Harris fought tooth and nail to uphold wrongful convictions that had been secured through official misconduct that included evidence tampering, false testimony and the suppression of crucial information by prosecutors.”

Bazelon then lists multiple instances where the Democratic senator failed to embrace criminal justice reforms – either opposing them or declining to state an opinion.

She cites Harris’ reluctance to take a position in 2014 on opposition to Proposition 47, a voter-approved ballot measure that reduced certain low-level felonies to misdemeanors. Bazelon also takes issue with Harris for not supporting standards on body-worn cameras for police officers.

If I was married to this transparently miserable, embittered, obnoxious, arrogant, self-reverential, egomaniacal, smug, graceless demagogue-scold/shrew/harridan/termagant, I would pray for a quick and merciful death. And, if my prayers were not answered, I would commit seppuku with a dull butter knife.

Reminds me of when Lady Astor said to Churchill, “If you were my husband, I would put poison in your tea.”

Churchill replied “Madam, if I were your husband I would drink it.”

Great quote. Sir Winston did have a singular wit.

She will run mainly on her sex and her race. She has notbhing else whatsoever to offer.

Unfortunatley, as well as her gender and mixed race pedigree that she will trade on, she also has a deep conviction and adherance to the principles of marxism to go along with her sex and race. Don’t under-estimate her, She is every bit as nasty as Hildabeast, she is attractive and articulate, and PURE EVIL, and will do whatever she can to further debase and destroy the Constitution of the United States.

Just like Obama, she’s spent way too much time admiring her mirror.

If there’s a D there, NEVER. EVER.

She definitely comes off as female Obama with all the smugness abound. Despite current polling, I am guessing she will be the nominee especially if Cali successfully pushes their primary early.

I agree. Toxic identity politics is the key to understanding the Democrat Party.

Wow! What a surprise!! Kamala Harris declares for the Socialist-Democrat nomin…Oh…

I don’t need her fighting for me, thankyouverymuch.

No ethical position a lawyer has advanced in her role as a zealous advocate for her client should be be held against her. But if the Dems want to apply one of their arbitrary and capricious litmus tests to this nasty piece of work, then who am I to complain.

Let the progressives eat one of their own. Stupid runs deep among their ranks.

I’ve watched her in hearings. I cannot believe this is supposed to be a person with six years of courtroom experience.

Yes, that and some of her brainless tweets. I hope someone saved some of those priceless examples of sheer stupidity.

On the Democrat side I think she is the candidate to beat. The MSM/DNC is all-in on identity politics (the more toxic, the better), and Harris allows Democrats to play both the race and gender cards in the general election. If she were also a lesbian Muslim she would be a shoo-in.

The dream (for Democrats) is for their presidential candidate to run a feel-good above-the-fray Great Uniter campaign while the MSM/DNC does the grunt work of deligitimizing ALL criticism and demonizing and dehumanizing other candidates and their supporters. That was the template for Obama, and no one can say it doesn’t work.

It is always possible she may not get the nomination, but if I were to bet my own money in this horse race I think she is the horse most likely to win.

she could draft warren as a running mate–” salt & peppa, one white, one black, two stupid. “

If she shows up in Hustler, Penthouse or similar publication, I might take a look.

Hmm, I bet John Kerry would accept her as a running mate, presuming she has any money.

For an early preview just askWillie Brown. I thought sleeping one’s way to the top was so out of vogue these days.

Indeed, so often, merely a matter of opportunity.

Can’t stand her. A condescending b****. So impressed with yourself. she would be a disaster as POTUS.

Harris is evil wrapped in an attractive package. She has a deep conviction and adherance to the principles of marxism to go along with her sex and race. Don’t under-estimate her, She is every bit as nasty as Hildabeast, she is attractive and articulate, and promises never-ending and never fulfilled utopian dreams built upon the destruction of our posterity (see the National Debt & UNFUNDED Liabilities), and will do whatever she can to further debase and destroy the Constitution of the United States,