Kamala Harris Asks Acting ICE Director: ‘Do You See Any Parallels’ Between ICE and the KKK?

Kamala Harris Asks Acting ICE Director: ‘Do You See Any Parallels’ Between ICE and the KKK? 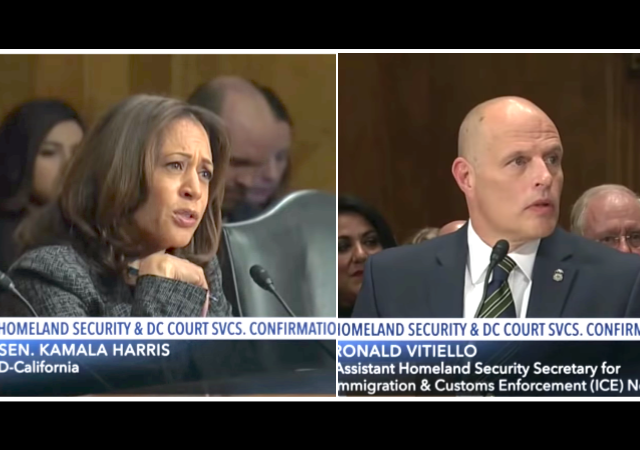 I’d say I can see Sen. Kamala Harris’s (D-CA) 2020 presidential aspirations go down the drain, but something tells me this won’t affect her.

During the confirmation hearing for Ronald Vitello, the acting ICE director, to become the permanent director, Harris asked him if he sees any parallels between ICE and the KKK after she cited a tweet he sent in 2015 where he claimed “the Democrat Party was comparable to a ‘liberal-cratic’ or ‘neo-Klanist’ entity.”

“Are you aware of the perception of many about how the power and the discretion at ICE is being used to enforce the laws and do you see any parallels?” she asked.

“I do not see any parallels,” Vitiello interjected. “That puts ICE in the same category as the KKK. Is that what you’re asking me?”

“No, I’m very specific in what I’m asking you. Are you aware of a perception that the way that they . . .” Harris continued, before Vitiello interjected. “I see none,” he said.

“Are you aware that there is a perception that ICE is administering its power in a way that is causing fear and intimidation, particularly among immigrants and specifically among immigrants coming from Mexico and Central America?” she asked.

Vitello answered no, which did not satisfy Harris because she cannot believe how someone who should be in charge of the agency and not know some people view it as such:

“It seems to me that you would understand that when you use words like the words you used just three short years ago, that that would contribute to that perception,” Harris said. “And it’s harmful then, it’s harmful, in terms of the mission of the agency and the work of the individuals there. And it is harmful in terms of leading — innocent people arriving at our border fleeing harm, it is harmful to them.”

Harris has not kept it a secret that she hates ICE and cannot stand the way the agency operates:

“I think there’s no question that we’ve got to critically re-examine ICE and its role and the way that it is being administered and the work it is doing,” she told MSNBC. “And we need to probably think about starting from scratch.”

One had to be a Democrat to be a member of the KKK. ICE has no such test.

notamemberofanyorganizedpolicital in reply to TX-rifraph. | November 15, 2018 at 11:02 pm

And you mean that ICE doesn’t allow such to become employees too.

Did Kamala’s ancestors own slaves? Here, or in the old world of Africa?

I see no similarities with ICE, but the Black Liars Movement most certainly operates much like the KKK.

and the words you are using Senator remind us all of one of your predecessors, Senator Joe McCarthy !!!

May want to put McCarthy in context…. there were Communists in the government… FDR dumped this first VP for being too much of one. Here is manufactured comparison.. another trait of communists.

“I’d say I can see Sen. Kamala Harris’s (D-CA) 2020 presidential aspirations go down the drain, but something tells me this won’t affect her.”

The deranged left will laud her for this insanity.

I hope she does run! The more of these wack jobs run the better for conservatives.

Oh really? Doesn’t look like conservatives are winning against liberal whack jobs as it is.

Personally I think a lot of politicians on both sides are whack jobs and act like it … and we can thank Obama and Trump for it. It’s not going to get any better for any of us until Trump is gone and the pendulum swings back to the middle … if that’s even possible at this stage … which I doubt.

Gee, from what I can see Trump was a swing towards the middle, and both extremes hate him.

Imagine having to hear this woman for any length of time with her attitude and oozing hatred.

She might actually believe this crap that comes from the wrong orifice, which is even scarier that she was able to use sex to get to the corridors of power.

She is the epitome of the mental challenges the left face, in days of yore she would have been institutionalized for being insane, though these days, if those criteria were still enforced, we would have run out of room to keep all these loony leftists.
How the hell did they gain power? How did the general American populous look at this version of the National Socialist Workers Democratic Party and think it was a good idea to elect more of them?

Let’s see, the Democrats invented the KKK so they could control blacks, and now the Democrats want to destroy ICE so they can import a new slave class of poor brown folks who will take jobs away from poor blacks.

Yeah, I see some parallels.

A. No madam Senator. ICE enforces constitutionally passed laws. The KKK was the paramilitary arm of the Democratic Party charged with enforcing Democrat passed discrimination through terror.

No. Do you notice a inverse relationship between IQ and being a Democrat?

All Democrats are not low IQ, but they are steadily drawing in low IQ people. They are of course very short term gain orientated people, the foolishness of lowering America’s competitiveness by diluting our gene pool just to get short term votes is unconscionable.

It was Stalin that held public self-confessions for imaginary wrong doing Ms Harris. Mao did too, but like you, he came after Stalin.

Wait until they find out how many Hispanics work for ICE. I’ll bet they’re not real happy to be called kkker’s.
Once again to all the good Cali folks, get out ASAP. You’re never going to change a damn thing in that state so save yourself and take a good conservative vote to Nevada or Arizona. Maybe you’ll make a difference in those states before it’s too late for them.

I am to the point of considering setting cars with California plates on fire when I see them. The. Oh try deserves better than to have these locusts ruin more states.

This is like asking the question of a man, “So, how long have you been beating your wife?”

A false premise, putting the interrogated individual in a position to defend what is legitimate because of the false equivalence and charged analogy.

And she gets away with it because Democrats ALWAYS DO! I.C.E. is a government agency, not a Democrat-founded para-military/religious organization of lowlife scum who murder, destroy, and systematically oppress others based on their hate. They hate Jews, blacks (all non-whites, actually), Republicans (yes, they attacked Republicans quite often, because they helped blacks to transition from slaves to freed men, women, and children)….the list goes on and on.

Fascists in Europe in the 20th century studied the U.S. Progressives, the KKK, and other similar authoritarian groups to ADOPT THOSE HATEFUL, hideous practices; yet, those very same Democrats are at it again….but they are now PROJECTING to deflect from what they in fact are guilty of doing, and using their media megaphone to brainwash the distracted masses.

It grows so tiresome, yet we cannot become complacent. She needs to be publicly called out on this – now! The I.C.E. director needs to call her to the carpet, along with any others who threw out similar accusations veiled as “questions.” On social media, on interviews, wherever he can get the platform to make it clear she belongs to the party of the KKK, and I.C.E. is sworn to uphold the laws of this nation, as a Constitutional government executive branch agency, which she has sworn an oath to support as part of the Legislature.

I KNOW! I KNOW! Pick Me! They both have three letters.

Kamala wants to grab the media spotlight back from Sparticus.

Both ICE and the KKK are run by government agents?

Her face and neck are looking more wrinkly. She’ll look like an old hag by 2020. She seems to have no mode of interaction other than sort of cross-examination style. Just like Pocahontas has only her scolding style.

Harris’ career has peaked, but the longer she can remain apparently viable as a presidential contender, the longer it will increase confusion in their ranks.