Official announcement should come in a few weeks. 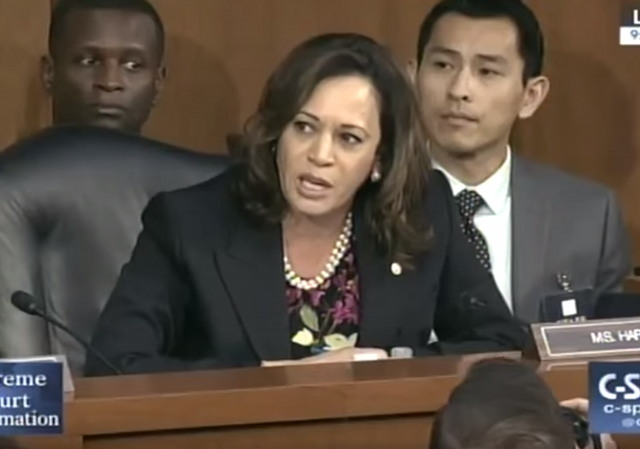 Sources have told KCBS radio that Sen. Kamala Harris (D-CA) will run for president in 2020.

They said she plans to announce her intentions “on or around Martin Luther King Jr. Day, probably at a campaign rally in Oakland.”

Harris, 54, has been making the rounds of television talk shows and appearing at several events this week as part of a brief tour to promote her new book, “The Truths We Hold: An American Journey.”

At every stop, when asked about running for president, Harris has answered with some variation of “I’m not ready yet” to announce her decision, citing family considerations. But several sources knowledgeable about her plans say she is ready, and has in fact decided to run, with the enthusiastic blessing of her husband and two stepchildren.

The debate within her camp is how, and where, to launch her campaign. The tentative plan is for Harris to enter the race for the Democratic presidential nomination with a campaign rally, most likely in Oakland, where she was born and began her legal career.

Darry Sragow, a Democratic strategist, recommended that Harris announce as soon as possible instead of dragging it out.

Now Harris’s team needs to figure out exactly how and where to announce. There’s a reason why they chose Oakland:

Harris’ advisors want to avoid identifying her too closely with San Francisco, where she first made her political mark as a two-term district attorney.

“San Francisco is viewed as a very nutty place by people outside of California, and frankly, by a lot of people inside California,” Sragow said.

Berkeley, where Harris was raised before her parents divorced and she moved with her mother and sister to Montreal, Canada, has also been dismissed by her strategists as not projecting the image they’re looking for. That leaves Oakland, where Harris was born, and where she returned after law school to become a deputy district attorney for Alameda County.

“I’m not sure what Oakland’s image is around the country these days,” said Sragow, but the city, one of the nation’s most diverse, is seen as on the rise. Launching her national campaign there would let Harris emphasize her roots and identify with the hardscrabble city’s gritty energy, creativity and even the Golden State Warriors, who’ve won three NBA championships since 2015.

That woman gives me the heebie jeebies. Please dems, give her a pass.

Same as the old days.

“No there there.”
-Gertrude Stein

She should head south to run for office.

She is red wrapped in brown.

She used to be wrapped around Brown…

We are going to run out of popcorn by the time this election cycle is over.

Oh joy.
Kamala must have a huge stack of freshly printed race cards ready to go.

Everyone needs to understand that there will be no blanket pass for black candidates this time around. Obama already played that trump card. This time black candidates will have to explain their history and their mistakes.

There have been reports that Moochelle would run in 2020. Does that mean we will have two “women of color” opposing each other in the Dem primaries? Oh, almost forgot Sen Warren (D – 1/1024) – that would be three women of color.

I cannot wait to see how Kamila, Hillary, Squaw Warren and Moochelle go at each other during the primaries! Its literally going to be comedy gold!!

The real race will be between Hillary and Moochelle…its gonna be interesting to see how these two handle each other given Hillary can’t stand her husband hahahahhaaa.

On paper Harris would be a formidable candidate. Democrats are addicted to identity politics (the more toxic the better), and Harris checks off a number of boxes for them in that regard.

Democrats also want to recreate the Obama strategy: nominate a “first” candidate (first black, first woman, first black woman, etc), have the candidate run an “above the fray” campaign, and relentlessly demonize and dehumanize as a violent KKK-style bigot any Republican who stands in the way of achieving that “first”. It worked in 2008 and 2012, when the GOPe presidential candidates folded faster than Superman on laundry day (a line shamelessly stolen from Seinfeld).

But Trump has already escaped the GOPe plantation, and has shown he won’t play the subordinate role the MSM/DNC axis has reserved for him. Likewise, Harris may turn out to be a crappy candidate (see Hillary Clinton). So look for the MSM/DNC axis to boost her chances by (1) elevating already dangerous levels of voting fraud to Third World thugocracy levels, (2) preventing Trump and other Republicans from running their ads on TV and social media, and (3) escalating violence against Trump supporters. All three of these were present in the 2016 and 2018 campaigns, but 2020 will dwarf them all.

Are the D’rats going to run any American candidates?

The Dems last foreign candidate worked pretty well for them.

Perusing the best-seller lists for Kindle e-books on Amazon.com, the other day, I saw that Harris had released the pre-requisite self-aggrandizing hagiography, I mean, “memoir,” featuring a predictably stale and unoriginal title, “My American Journey,” or, some similar drivel.

In my mind, Harris is too transparent a miserable and mirthless harridan and scold to ever be elected POTUS. But, after Obama, I suppose that I must concede that even the most radical and odious Leftist can now make it to the White House, with the aid of a fawning media that perpetuates the candidate’s mythology and covers up their flaws, their vile beliefs and their vile personal associations..

The amount of image-management and crony-handler involvement that these Dumb-o-crat apparatchiks submit to, is nauseating. It’s all stagecraft and artifice, scripted to the letter. Nothing is impromptu. All of these idiots are so transparently inauthentic.

What exactly has she done? What are her qualifications and accomplishments?

In other words, she’s superbly qualified — by Leftist/Dumb-o-crat metrics and criteria.

She’s a hardcore gungrabber. She outlawed all new semi-autos in California and set up a police force to exclusively confiscate guns from citizens.

What has she done? Well, she’s managed to convince the SJWs that the lightest-colored person in the photo up top is black.

It will be ON MLK Jr day. It will be hot and cold running race and gender talking points.

The Inflatable Man behind her says it all.

How many you got?
Bring them.