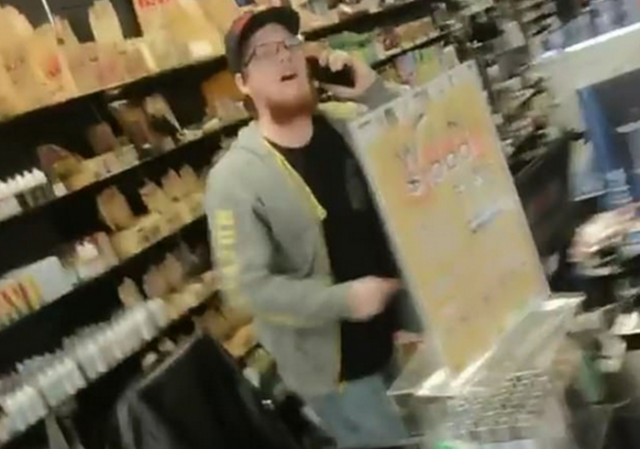 As we conclude 2018 and enter into a glittering New Year, one prediction I can make with ease is that the elite media’s continued attacks on President Donald Trump and his supporters will lead to even more public assaults on the President’s fans as well as his staff and other conservative figures.

Looking back on 2018, the low-points on the virtue-signaling vitriol include:

Now, A Georgia vape shop worker felt that he was entitled to launch a tirade against a Trump-supporting customer and refused to serve him.

Ian Furgeson, 36, walked into Xhale City in Tucker on Friday to buy some items but quickly bumped heads with the store employee who asked him to leave just minutes after he entered the shop.

Furgeson, sporting a MAGA hat and Trump shirt, then whipped out his phone and began to goad the store clerk.

‘I have just been asked to leave the store. He greeted me, that was nice. I did find the item that I wanted and the next thing he said was he’d like me to leave,’ Furgeson said.

Then he calls someone to complain about the customer and says: ‘He’s wearing some Trump bullsh*t…I’m not serving anyone that has to do with that f***er. I’m going to call the cops and have him leave.

The employee was subsequently fired.

Furgeson was on a quest to buy some product for his wife. All I can say is that he must really love her, to continue to try and buy the item in light of the theatrics.

Part of the reason the employee faced serious consequences for this behavior is the video went viral shortly after it was posted.

OMG I saw the word “Trump”, I need to go to my safe space and get my cannabis vape juice.

Some guy won’t sell vape stuff to a guy because the guy is wearing Trump related clothing. That’s literally it. The political climate in USA is nothing like I’ve ever seen. UK looks like political utopia compared.

Congrats kid. You just got famous for being a whiny liberal brat.

The vape shop employee might consider moving the California where such #Resistance is admired and appreciated.

I anticipate even more episodes of Trump Derangement Syndrome will be featured here in 2019.

I’d just like to point out, before the pointing, laughing, and mockification commences that there is no connection to cannabis at all.
The customer clearly asks for Naked Vape juice at 6mg (nicotine)level. This means that this is a standard vape shop selling nicotine e-juice, and not a “medical dispensary” selling THC/cannabis e-juice.
This fool’s behavior has more to do with the leftist pablum he’s been indoctrinated with since pre-school, and the leftist media than anything else. And maybe estrogen rich soy latte’s are responsible for his incredible octave reach near the end of the video.

Good points! This commie-lib’s weed use contributed little to his absurd behavior.

Just when I was about to finally give up on ever finding the perfect front man for my new punk band, The Eunuch Banshees.

The msm will never consider their bias and derogatory reporting against Trump as the cause for a lot of open hostility in society today. I read about the German journalist who has written many nasty articles, all fake, about the deplorables and racistTrump supporters. Even though he has been exposed as a fake his stories have set the attitude among Germans that these stories are fake but real. They now have a net negative view of America because all they see, read and hear is negative about Trump and his supporters. This is the Demorat playbook to a “T”. They lie and cheat and when they are caught say that their intentions were noble and that the crux of the story was true.

their intentions were noble and that the crux of the story was true.

AKA- the Dan Rather defense.

What is it Rush calls ‘men’ like this…the “castrati”? I really do feel for you 30 something women out there looking for actual men.

The truly sad part is that this kind of behavior is what leftist have been taught is what they can and should do.

How much you want to bet the guy sues the place for firing him?

Won’t happen in this case. He is a male and he is white, and he has been caught on camera in a complete moron meltdown. Now, on the other hand, if he was black or brown, and a woman, and smart enough (I know, I know, that’s an impossibility for a leftist libtard), then he could have contacted the Equal Opportunity Employment Council and raised a stink.

I was in a practice that hired a lot of entry-level people. One nuisance factor that we encountered was that some of them just did not work out, and we had to fire them. If they were male and white, nothing followed. If they were a person of color and/or female, we almost ALWAYS were reported and had the EEOC come snooping. We even had a (white) woman who was hired as a temp for 90 days contact the EEOC saying that she was not given the chance to be hired. Of course, we kept meticulous records of their (lack of) performance and of our progressive counseling and nothing ever happened, but it was a pain, and demonstrated why white males, in fact, do not have special privielges before the law.

The owner needs to go down there and fire him on the spot … both for his treatment of the customer, the spectacle he created in front of the other customer and because of how he spoke to the boss on the phone.

I actually heard elsewhere (so not verified) that it was that ‘other’ customer who reported the whiney, leftard man-child …

LOL, got banned at another site for posting the video. Language was rather ripe.
And the liberals were getting really annoying with the fake news and roooskie collusion nonsense.

Just so ridiculous to see the reaction of brain washed snowflakes. It truly lets you see into their minds, and how unable they are to get along with others who have a differing opinion.

Thanks demonRats for brain washing this generation of Unhinged Idiots !!

I watched the video and found it very surprising…

The last time I was in a store the kid behind the counter barely looked up from his phone! He communicated using a series of grunts, mumbles and vague gestures….

SO…on the bright side, (judging from the reaction) at least we know this clerk can read….Right..????

(It’s a triumph of our modern day education system) 🙂

It would have been much better for the customer had he been polite and courteous. Then the clerk would have no claim to victim status, such as a claim of Tourette’s, autism, asperger’s or the like. If confronted with only the shirt, the clerk’s behavior is wildly inappropriate. When confronted by a mocking, profane and antagonizing customer, the go to sympathy card for these types is victimhood.

Not hot take…he remained calm. Profanity is neither illegal nor taboo these days, especially when you have to stand up to a howler monkey.

Does anyone else wonder why the name of the clerk has not been disclosed?

If this were a conservative berating a liberal, CNN would have doxxed the clerk immediately and they’d have a pool of reporters at his house 24/7; all the networks and MSNBC would have the liberal victim on TV more than they did Michael Avenatti. The New York Times and Washington Post would be reviewing and reporting on his Facebook & Twitter posts, they’d be interviewing everyone the clerk ever met since kindergarten. However, since he went crazy on a Trump supporter, the media believe that while he may have been a bit over the top, he was actually justified in his rage.

What is that clerk’s name? I want to know.

I have been wondering the EXACT same thing! You are absolutely right- had it been a Trumper freaking out his name would be plastered all over every venue imaginable.

Agree, he should be doxed.

I actually believe it is tacky to wear Trump gear. One should identify with themselves, family, nation, religion not with an individual.

And Liberals are wacky and may have chromosome issues. That guy was lucky he was not scratched, bitten, or raped.

Whatever the motivation, the owner handled it well. When you are in business you want as many customers as you can get.

Republicans tend to be more mentally stable than Leftists so I recommend not provoking them. One usually does not provoke a pit bull, rattle snake, wasp, etc etc. When around Liberals treat them as if they are mentally ill and there is a good chance that approach will turn out to have been appropriate.

Who aspires to be a Vape sales clerk?

…No one should have to leave their Tee’s, Hat’s etc. at the door for fear they offend a snowflake. As my 15 yr. old granddaughter said to a woe is me friend…”Build a Bridge and Get Over It”.

The risk of hiring democrats.

I was wondering the same thing about proctologists.

The MSM may hire him as a White House correspondent. I’ll be looking for him at the President’s next press conference.

An example of CNN’s Collateral Damage. These days it isn’t wise antagonizing someone who starts bouncing off walls over politics. No doubt if that guy had a gun behind the counter he would have started shooting. In Atlanta you can get shot for making some driver mad during rush hour traffic, which is pretty much all the time these days.

Firing is no longer enough. He needs to be DOXED.