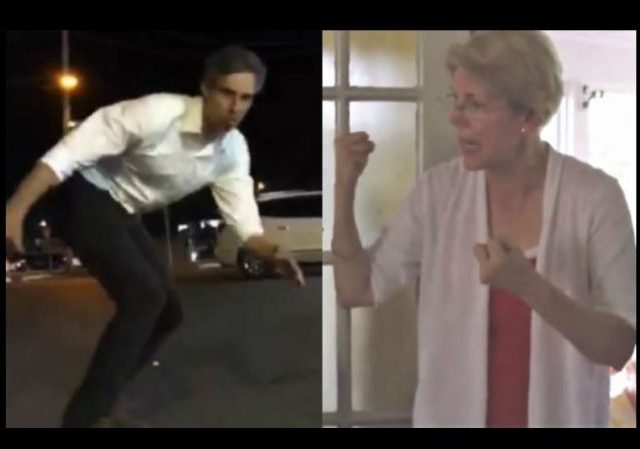 It’s too early for this.

Robert “Beto” O’Rourke, fresh off his loss to Ted Cruz in the Texas Senate race, is not ruling out running for president.

Beto has a very Obamaesque quality to him … according to … Obama:

Rep. Beto O’Rourke may have lost in Texas, but he’s winning in Obamaland.

Aides to the former president and the man himself say O’Rourke’s campaign against Sen. Ted Cruz, R-Texas, gave them flashbacks to Obama’s precocious political rise and has positioned the young white congressman as an early if unlikely heir to the first black president’s “hope and change” mantle.

Obama said as much at an event in Chicago last week and some of his former political lieutenants have been publicly encouraging O’Rourke to consider a 2020 presidential bid, while privately counseling him on what to expect should he jump in.

How is hope and change playing so far? According to a poll reported in The Hill, Beto trails some elders like Biden, Bernie and Hillary.

But his showing is good enough to leapfrog Beto past such *powerhouses* as Spartacus, Kamala Harris, and Elizabeth Warren. Via The Hill:

Rep. Beto O’Rourke (D-Texas) is considered one of the top Democratic contenders for the White House in 2020 even among more well-known potential hopefuls, according to a Harvard CAPS/Harris poll released exclusively to The Hill.

Former Vice President Joe Biden is the most popular Democrat in the potential 2020 primary, with 28 percent of Democratic and independent voters saying they’d most likely vote for him, according to the poll released on Monday.

Biden remains the front-runner even when 2016 nominee Hillary Clinton is included in the poll. Sen. Bernie Sanders (I-Vt.), who also ran in 2016, comes in second place at 21 percent.

O’Rourke, who earned a groundswell of national attention in 2018, was ranked third with 7 percent of Democratic and independent voters backing him, garnering more support than other frequently touted potential challengers….

When Hillary is included, Beto actually rises a little though he places 4th not 3rd:

When Clinton is factored into the poll, she bumps O’Rourke down to fourth place, though his support grows from 7 percent to 9 percent.

Biden and Sanders — who have positive favorability ratings — remain in first and second, respectively, in that scenario, but their numbers slightly shrink. Biden then has 25 percent, while Sanders garners 15 percent.

Clinton comes in third place, with 13 percent of support.

This is really bad news for Warren. She has been de facto running for a year. She has the team in place, is making the moves, and even had the chutzpah to release her DNA test three weeks before the midterms to try to dominate headlines.

Unlike the others with national name recognition, being recognized doesn’t seem to help Warren, as demonstrated by polling in her home state, the Commonwealth of Massachusetts.

Number of the week: The Massachusetts secretary of state certified the state’s US Senate election results this week and found that Democratic Sen. Elizabeth Warren defeated Republican Geoff Diehl by 24 points.

What’s the point: Warren’s margin may sound impressive, until you realize Hillary Clinton won Massachusetts by 27 points in 2016. Clinton won by 3 more points than Warren, despite 2018 being a better year for Democrats nationally and Warren having the advantage of incumbency.

Warren’s performance in 2018 was one of the weakest for a Democratic Senate candidate. I created a simple statistical formula explaining the results of the 34 Senate races with at least one Democrat (or independent who caucuses with the Democrats) and one Republican. Controlling for a state’s weighted average partisanship and incumbency, Warren’s performance was the sixth worst of all Democrats. She did 7 points worse than expected. (For comparison, Minnesota Sen. Amy Klobuchar and Vermont Sen. Bernie Sanders outperformed their baselines by 9 and 12 points respectively.)

It’s not the only bad number for Warren published this week. A UMass/YouGov study of Massachusetts Democrats and Democratic-leaning independents finds former Vice President Joe Biden at 19% to Sanders’ 14% to Warren’s 11% in a hypothetical Democratic presidential primary. A large 27% answered “don’t know.” YouGov’s polling does not meet CNN’s standards because it doesn’t use probability sampling.

Of course, it’s very early in the 2020 Democratic primary process, which is probably why 27% of Massachusetts Democrats don’t know who they support.

Yet you would think that candidates who just ran major statewide races in their home states would be favorites in their home states. In this case, Warren isn’t only not in first place, but she’s also not even in second place. A full 89% of Massachusetts Democrats are not behind her at this point.

The lack of home state love should, in theory, be worrisome for Warren. These are the voters who know her best. If she is underperforming with them, then it follows that she may do worse than expected when exposed more fully to Democrats nationally.

Even this early, eventual nominees are usually winning in hypothetical primary polling in their home states.

Because of Trump’s branding of Warren, she has the name recognition, though that name isn’t Elizabeth or Liz. It may be hurting her where it counts — by making her seem like a not serious candidate even as she tries to be extremely serious.

Please don’t call him “beto”. That was just his attempt to motivate the hispanics in Texas to vote for him instead of Sen. Cruz. He will morph into “Robert” aka RFK any time now. There aren’t enough hispanic votes to get him past the other poseurs in the democratic socialist party out side of Calipornia, which he already owns and the rest of the country.

I call him Beta O’Fraud.

So I was curious about that Beto moniker, and it does appear to be a family nick name, from his earliest childhood. Not defending him, far from it.

Hmmmmmm. A Cretin or a clever power mad swindler? We have had both from the Democrats recently. Did not work out well, because the last cretin turned out to be a puppet for the left wing swindlers.

A guy who has a resume that’s somehow even thinner than that of Obama is the ideal candidate for the Dems in 2020.

He was a nanny after college

BUT… he married a billionaires daughter…

“BUT… he married a billionaires daughter…”

Does she have a sister?

I think sisters’ daddy is single. How far do you want to swing for a few bux?

Probably not how you meant it, but her “exposure” is exactly what happened.

A fake Indian vs a fake Mexican

Who comes up with this?

I would add that not only did Warren underperform expectations in the MA Senate race and poll weaker than Hilary in 2016 she also got fewer votes that our Republican (in name only) Governor Charlie Baker.

Keep in mind her opponent in the Senate race was Trump’s MA campaign head in 2016. She should have demolished him in this state.

Reality is that she is truly unlikeable, is perpetually negative and made a monumental mistake with her Boston Globe supported revelation of her possible 1/1024 Cherokee ancestry. Only the most die hard Cambridge/Brookline/Northampton/Amherst Democrats thought that provider her cover for her career enhancing stunt years ago.

She has now been surpassed by new Dem lightweights like Beto and AOC but I suspect they will fade in the coming year and it will come down to Hilary, Bernie and maybe Biden for the nomination.

Groping? He can run with moooochelle obama.

She/he is an expert:

I’m still holding out for Wiener-Holder 2020.

who knew that democrats were so sexist?

i mean, the only reason to prefer a maled candidate over a female one is sexism, right?

The Democrats are 1/1024th excited for Warren.

Sheesh.. the Republicans have earned the name of the Stupid party due to the poor showing they make when they are in charge, and then you have the Democrats who seem to fill their ranks with STUPID people. I swear, I look at the contenders and the competition I see is truly unintelligent people who are leading contenders. It’s like they are in competition to see who can be the closest to moron status.

The collective IQ of this bunch is so low that it is truly frightening to think they might have a chance of winning the Presidency with the help of their massive fraud machine.

O’Rourke is a dim bulb. Yet his campaign did far too well against Cruz. Cruz is not so well liked, but him running against Napoleon Dynamite should have been laughable. The man is a joke, but the joke is truly on us that this vacuous National Socialist party can steal elections regularly and pretty much nothing is being done about it.

Yellow Jackets. When you stop and think about what they are rioting about, it’s mostly what we would call “conservative” issues. Yes, I’m sure they are mostly the usual communists but the globalist usurpation of national sovereignty isn’t sitting well with them either. So maybe people deep down really down want communism when it is staring them in the face?

What is happening in Paris could very quickly spread throughout Europe and eventually here. Even with all of the election manipulation, globalism is losing at the polling stations forcing people into the streets. The New World Order is looking more and more like the New World Chaos as each day passes.

We may be approaching a tipping point. People are going to get shot in Paris and then see what happens.

Oops. “So maybe people deep down really DON’T want communism when it is staring them in the face?”

People seldom vote for the most intelligent candidate, nor the best leader, but for the one who most closely reflects their own views … if a voter articulates a pet peeve and the candidate echoes their concern, many will respond “he/she’s got my vote” … so the voter is really electing a mirror image of themselves …

That idiots get elected is a reflection of their constituents composite intelligence and ideals … NY14 has to be the dumbest damn district in the nation. Though CA43 gives ’em a run for their money. That their stupidity is oft repeated suggests it’s an incurable condition.

ISWYDT.. pretty funny, now. Like most of the flawed D potential candidates.

… and “powerhouses” … ProfJ is channeling Branco or perhaps the Onion …

Ok, so let me get this right. It will be Obama all over again.
Just a few shades whiter.

Democrats, voting with their genitals, as usual.
We saw the press’s response to Obama’s 2008 appearance in the press plane doorway displaying his prominent bulge.

Yes, well, two things occur to me. In a way, it might be a good thing if Master Beto runs, since he reminds Dear Commissar of himself. While Dear Commissar was good for Dear Commissar, he was LOUSY for the electoral prospects of OTHER Commiecrats, given his inability to shut about himself and his policies during his mis-administration. We can hope for the same here, in that he steals the oxygen from other Commiecrats, and donor money as well. That he failed to knock off Cruz given the money invested in him tell us money isn’t everything. Then again, we already HAD an example of that as to the Establishment guy who knocked off by David Bratt not too long ago. As to Princess Liawatha, she really has only herself to blame for her change of fortunes. She’s almost as unlikeable as Fellonia Von Pantsuit, and her charisma may now be in negative integers. I suspect people are having Medusa Fatigue at this point.

Must we endure another election cycle with a candidate who has become a “media star” by the MSM, and touts his ridiculous nickname as a badge of honor, coolness amongst his kool-aid drinking fans.

He shares other admirable Obama traits, including not sharing his money with his betters….