Trump branding of Elizabeth Warren as Fake Indian continues, expecting her to run in 2020

Trump branding of Elizabeth Warren as Fake Indian continues, expecting her to run in 2020

Being a fake Indian is her brand. She’ll never shake it. 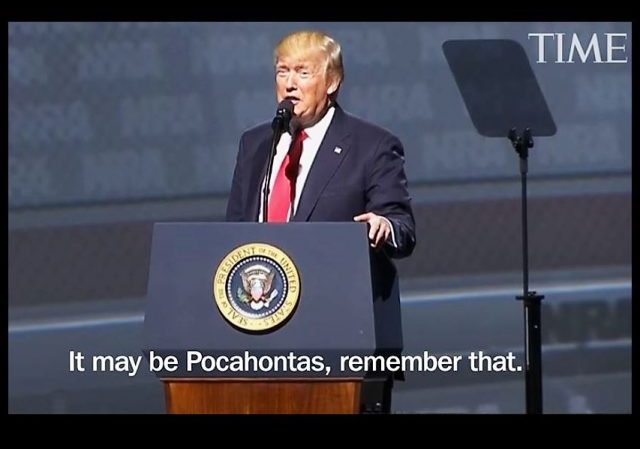 When Newt Gingrich spoke at Cornell earlier this semester, he made a very important point.

Trump doesn’t attack his political opponents, he brands them. The brand for Jeb was “low energy.” For Rubio, it was “little Marco.” For Cruz, it was “lyin’ Ted.” Once branded, they could not shake the image.

Which brings up Elizabeth Warren. As we posted earlier, while Warren is denying that she “is” running for president in 2020, she’s making all the normal pre-presidential run moves.

She’s raised her profile as the face of “the resistance,” a face Republicans also are jockeying to put out front.

Speaking at the NRA today, Trump warned that members should expect “Pocahontas” to run:

“I have a feeling that in the next election, you’re going to be swamped with candidates, but you’re not going to be wasting your time,” said Trump, the first sitting president to address the NRA’s convention since Ronald Reagan. “You’ll have plenty of those Democrats coming over and you’re going to say, ‘No, sir. No, thank you. No, ma’am.’ Perhaps ‘ma’am.’ It may be Pocahontas, remember that. And she is not big for the NRA, that I can tell you. But you came through for me, and I am going to come through for you.”

As you know, that term (along with “fauxcahontas”) are not terms we use for two reasons:

First, those terms are possibly demeaning to the real Native Americans who were victimized by Warren, who ripped off Native American identity to try to advance her career. Second, the terms allow Warren and her supporters to distract from Warren’s ethnic fraud. Which is exactly what pro-Warren media immediately did:

Trump calling Warren Pocahontas is racist. We kind of gloss over it at this point. But this is the president being racist.

Yet it’s also true that those terms are not meant to demean anyone other than Warren. They are reminders of Warren’s ethnic fraud. They are used to mock her. Trump has been doing that for a long time, it didn’t start at the NRA.

Trump is branding her. And being someone who was a fake Indian is her brand. She’ll never shake it.

So, yes, I think Elizabeth Warren will run, and I think she’ll get the Democratic nomination (just like I think she would have trounced Hillary).

The fake news media (another Trump branding) will rally around the fake Indian.

I agree that it generally makes little sense to use terms like Pocahontas or Fauxahontas for Warren as it distracts from the cold, hard reality of the fraud she committed but Trump is one of the few who can get away with it.

Please continue to “hammer” her with this at every turn as we cannot ever let her near the presidency.

I disagree and I think you fall into the trap we on the right have fallen into too many times. The kind of voters who switched to Trump were the kind who disgest labels like Fauxahontas. Trump knows what he doing. He isn’t just having an ego trip throwing out these labels.

I prefer the name “Lie-awatha” myself

Poke us, Haunt us

If Slick Willy is alive it will be Hillary (if she’s still alive). It has been “her turn” since she covered up her first bimbo eruption and she won’t let Bill forget it.

This highlights everything wrong with the left. It’s not the crime of cultural identity theft that upsets them. No, the greater unforgivable crime is pointing out the cultural appropriation that took place!!

Hey! They’ve been doing that since they stole Manhattan for $24.

What Warren did is exactly the same as the anti Israel anti Jewish groups that call themselves Jewish to steal Jewish identity. It should have ended her career, yet you don’t hear Harvard complaining about her getting ahead by fraud. You never see the mainsteam media bring up her fraud.
What makes this so reprehensible is that Native American genealogists have said Warren is a liar and few people cared.

Harvard should get sued over it.

As a direct descendant of Genghis Khan, thank you for showing proper respect to us Mongolian-Americans:

Maybe you could honor us someday with a musical tribute to Mongolian throat singing. Here’s a tutorial to get you started:

And who can ever forget this classic:

What the heck, you’ve down to recycling the soundtrack of the 1960s commie protest movement. A new direction might help expand our appreciation of our American diversity. It’s high time we acknowledged and saluted the contributions we Mongolian-Americans have made. Our numbers are legion.

Warren may run, but it’s a long way off. I think the Donks are going to mimic the Trump run with a celeb, ie, Cuban or Clooney or Oprah. It will be all TMZ all the time and no substance…. b/c it worked already with Obama.

Locked in 30-35%. How to peel those Trump voters in Wisconsin, Michigan and Pennsylvania away from DJT? They have no plan. The Dems are already emphasizing increasing turnout, not wooing back the Dem voters that they alienated.

You hit on the key Dem vulnerability, flyover “Rust Belt) states who are going to be the primary beneficiaries of Trump’s rebuilding of America’s industrial base. They just don’t have time to fight off that juggernaut. Those who may try will be shouted down and strangled out of the conversation by the brain-dead “resist, insist, persist, enlist” losers and their dirty money.

Thanks to the GOP version of that (led by Paul Ryan and Mitch McConnell), the GOP is headed for a 2018 bloodbath but 2020 is Trump’s to lose. So far, he is looking good.

Professor, we disagree about the “Fauxcahontas” label. It is not demeaning to Aboriginal Americans – in fact, many of those I know in the Plains tribes use it themselves as a form of derision. It is their belief that she should be stripped of every advantage she got as a result of that lie, and prosecuted if any federal laws were violated by her impersonation of a person in a Protected Category!