“She’s worked out stuff with Mom’s Demand Action to make sure that she can support their goals without supporting the organization openly.” 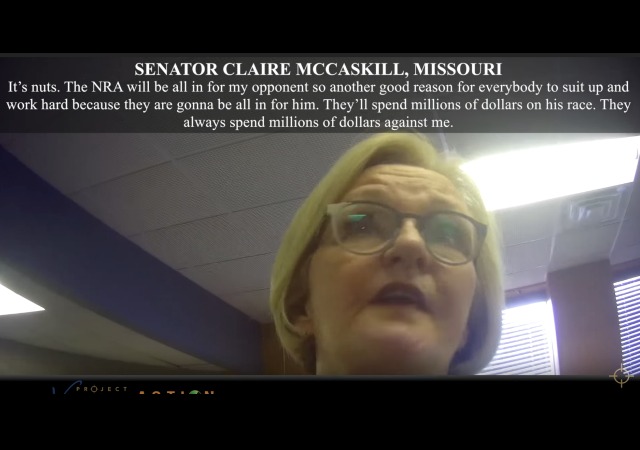 To make matters worse, the Project Veritas journalist caught staffers on tape admitting that McCaskill hides her real views on guns in order to receive votes. She will not publicly support Moms Demand Action or court President Barack Obama to campaign for her because both could be toxic for her campaign.

McCaskill is a typical leftist when it comes to guns. She has no respect for the 2nd Amendment and wants to ban almost anything:

MCCASKILL: “Well if we elect enough Democrats we’ll get some gun safety stuff done. They won’t let us vote on it, we’ve got 60 votes for a number of measures that would help with gun safety, but McConnell won’t let ’em come to the floor.”

MCCASKILL: “Universal background checks, all of that… But if we have the kind of year I think we might have I think we could actually be in a position to get votes on this stuff on the floor and we’d get 60 [votes]…”

JOURNALIST: “So you would be on board with the bump stocks and… high capacity mags.”

MCCASKILL: “Of course! Of course!”

McCaskill also commented that McConnell doesn’t want to bring up these “safety measures” to the floor because that means it will go to the House, who has a ton of NRA members.

The journalist then asks Carson Pope, a field organizer for McCaskill about an argument he heard that the senator doesn’t want to ban semi-automatic firearms and the whole time Pope is shaking his head. Pope confirms that “a semi-automatic rifle ban is more so what” McCaskill would support.

Rob Mills, a deputy regional field director for McCaskill, told the journalist he never hears her say her anti-gun views out loud since “she has a bunch of Republican voters.”

If she made her views known and aligned herself with groups like Moms Demand Action because it would hurt her election:

MILLS: “But she doesn’t openly go out and support groups like ‘Mom’s Demand Action’ or just like other groups that are related to that. Because that could hurt, her ability to get elected. Because people like see that and they’re like well I don’t want to support her even though they stand for the same policies…”

MILLS: “She’s worked out stuff with Mom’s Demand Action to make sure that she can support their goals without supporting the organization openly. And you know, Mom’s Demand Action does the exact same thing. Like a lot of our volunteers are actually from there. She’s really good about strategy and making sure she has a goal and can get there.”

So if McCaskill has these far-left policies, then why isn’t Obama around her? Since failed Democrat presidential candidate Hillary Clinton is poison, why not cling to Obama?

Staffer Nicholas Starost explained: “Yeah so Obama is campaigning for Democrats, yes. But Obama will not be coming to Missouri, because of how polarizing a figure he is in Missouri. There’s thoughts that Obama would do more harm here than he would do good for Claire.”

STAROST: “Because of how like, cause he’s a very liberal candidate. And like… Claire distancing herself from the party is gonna help her win more votes than it will saying like: “Oh here’s Obama, the former President of the United States, to now speak on my behalf.” Which is unfortunate because I love Obama to pieces, and I’d love to see him come here.”

JOURNALIST: “And they essentially have the same views on everything?”

How about impeachment of President Donald Trump? Yeah, staffer Glen Winfrey said McCaskill supports that, too:

JOURNALIST: “So, here’s the real question, Claire holds off on impeachment to get the moderate. What do we tell the moderates when we drop the impeachment hammer afterward?”

WINFREY: “Get over it. It was a national security question. That information was confidential, and she did her duty by not revealing the information until afterward.”

The Missouri race will come down to the wire as polls show McCaskill and her Republican opponent Missouri Attorney General Josh Hawley in a dead heat. In one poll McCaskill is on top while the next one has Hawley on top.

No wonder campaign staffer Melissa Balke told the journalist, “It’s like we have to lie to get elected.”

McCaskill has outraised Hawkley by 4-1, but Hawley has more in the bank in October. From the St. Louis Post-Dispatch:

Reports to the Federal Election Committee from the two campaigns show that as of Oct. 1, McCaskill, D-Mo., had raised roughly $27.3 million to Hawley’s $7.4 million.

But Hawley began October with more than $3.5 million in the bank to McCaskill’s slightly less than $3.2 million.

Hawley raised roughly $2.8 million from July 1 through September, but he spent just under $2 million in that stretch from July 18 to Sept. 30, meaning McCaskill outspent him by more than 5 to 1 over that period.

Rights and responsibilities. That said, #HateLovesAbortion.

“Democratic Sen. Claire McCaskill and her staff saying that she supports strict gun control measures, but that she couldn’t express that outwardly or she wouldn’t get reelected.”

No problem. The press will hide the news that she hides her true agenda. Fellow travelers all.

Video, what video the St. Louis Post Dispatch will say. We don’t show unverified videos the TV Stations will say.

My thoughts are that James O’Keefe is doing some good work here, as always. He just needs to watch out that he doesn’t turn up like that Saudi journalist…erased.

One big difference for James O’Keefe is, unlike Jamal Kashoggi*, he isn’t a good** Islamist Muslim Brotherhood member since the 1970s. James actually believes in democracy. We are told by the MSM that Kashoggi is a big believer in democracy, but the Muslim Brotherhood wants strict Shari’a to govern countries and opposes all Western influence in Muslim countries.

* That Saudi journalist with a Green Card living in the US and working for the WaPo. He moved to the US last year, yet he already had a Green Card before 2017. How did that happen? The MSM will never ask former administration officials about that.

James O’Keefe is the ONLY investigative reporter working today.

I haven’t heard anybody say something inane like “Hey, we can work with these people,” in quite a while. And a good thing, too.

The futility of “reaching across the aisle” becomes clearer every day.

Since the items she mentions are enumerated in the Constitution wouldn’t it reason that what needs to be banned is Claire McCaskill instead .

Is McCaskill another New World Order open-border Globalist Cultural Marxist that will have government and corporate USA our royal overlords that we are forced to obey or pay severe penalties?

Is Soros and other traitors financially backing her? Would the Founders declare that she is the tyrannical class of which they warned us about in our writings? To be safe I will NOT vote for her.﻿