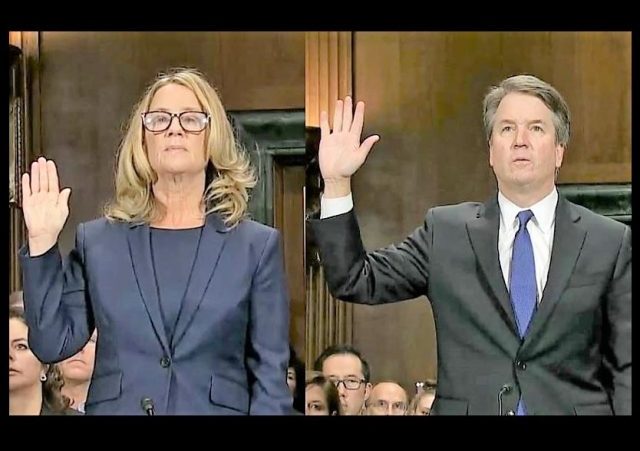 Turns out, launching a massive character assassination campaign for purely political purposes has consequences. Who knew?

According to NPR, Democrat enthusiasm has tanked since July when an NPR/PBS/Maris Poll showed Democrats surging ahead with a 10 point lead in voter enthusiasm.

That lead is now 2 points, or as NPR writes, “a statistical tie.”

And take a look at the party breakdown: 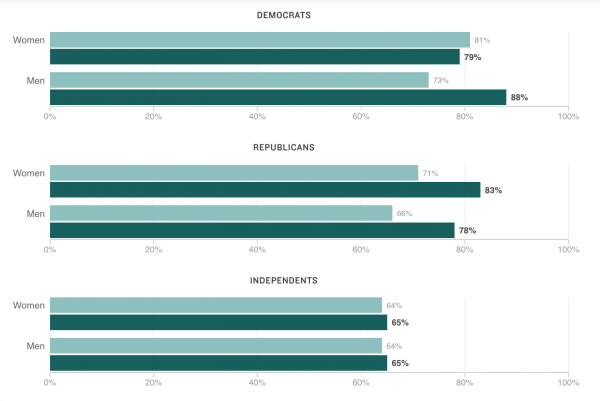 Democrats’ advantage on which party’s candidate they are more likely to support has also been cut in half since last month. Democrats still retain a 6-point edge on that question, but it was 12 points after a Marist poll conducted in mid-September.

The results come amid the pitched and hotly partisan confirmation battle over Brett Kavanaugh’s nomination to the Supreme Court. Multiple women have accused Kavanaugh of sexual misconduct when he was in high school and college. He categorically denies all the allegations. The FBI is conducting a supplemental investigation into the accusations that is expected to be wrapped up by the end of this week.

With Democrats already up fired up for this election, the Kavanaugh confirmation fight has apparently had the effect of rousing a dormant GOP base.

“The result of hearings, at least in the short run, is the Republican base was awakened,” noted Lee Miringoff, director of the Marist Institute for Public Opinion, which conducted the poll.

Democrats need to net 23 seats to take back control of the House, but if those groups stay home in large numbers, it would blunt potential Democratic gains. With 34 days to go until Election Day, it all points to another election dominated by party activists.

Last week, Mike blogged about conflicting data, a Pew poll showing Democrats as being more motivated to vote, and a second poll conducted by Gallup that indicated voter rage or enthusiasm will not necessarily result in higher voter turnout.

Each of these polls is asking different questions, but the trend seems to indicate the winds have shifted in the Republican’s favor.

How can a decent person be enthusiastic when his political party turns into trash?

You pick the lessor evil and hope for the best, that is what I did when I first voted for Trump. I have been pleased with Trump, and would be more pleased if there was less obstructionism, but that is not Trump’s fault.

Now that Trump has a track record of doing his best to deliver on campaign promises, I will cheerfully vote for him again.

In subsequent elections it will take a miracle to get me to vote for any Democrat.

At first glance i read it as democrat euthanasia, it seemed to make sense.

This is irrational. Nutty. Just plain stupid mob mentality. It has nothing to do with what he did in High School over a third of a century ago.

DiFi should have read “Militant Normals”.

IMO both parties suck … neither is good for America.

We will need to sideline both parties until they come to their senses. That means voting for outsiders like Trump, and for independents.

We should cut politicians medical coverage and retirement. Most of these political jobs should be part time. We have too many hucksters in the Beltway, and they need a collective attitude adjustment.

HOT OFF THE PRESSES.

I have conducted a highly scientific poll that yielded the following shocking results:

Asked whether they believed the Senate should confirm Kavanaugh:

Don’t do that. You might give him brain dramage.

There is not much to damage.

wombat you should be ashamed it’s “FFFFFF” them.

Is she the reason poles come in 16 foot lengths?

Via the Socialists that sit at the top of your party, and Democrat brazen attacks on an unquestionably decent man with nothing more than a claim unsupported by a date, time or place, your party has, in a period of just two short weeks, accomplished something that the Republican strategists have been trying to accomplish for DECADES: fully energizing the Republican base to vote in an off-year midterm where they control the Presidency, and BOTH houses of Congress.

Let’s hope the Republicans can maintain the outrage level for the next 34 days. Burn with the fire of 1000 suns! A heavy sweep of the Congress (+15 House seats and +10 Senate seats, and the Republicans CAN fix the nation in two short years.

I am so hoping that South Park references the confirmations in tonight’s ep. For those who don’t know, they start to work on the episode 6 days before it airs. They did the entire Elian Gonzalez episode in 3 days. The first ep for this season was in response to Parkland, which may have been sitting on the burner all summer.

Problem is all those deaf recently registered democrat voters turning out on voting day!

Republicans absolutely have to win outside the margin of fraud!!

It used to be relatively easy to say there was no difference between the parties–that politicians were all the same–that Maxine Waters and her ilk were aberrations. That is no longer even remotely possible.

I think this poll has as much significance as any other poll other than the actual election – very little.