“Only one other time in the last decade has the Republican Party had a significantly higher score than the Democratic Party.” 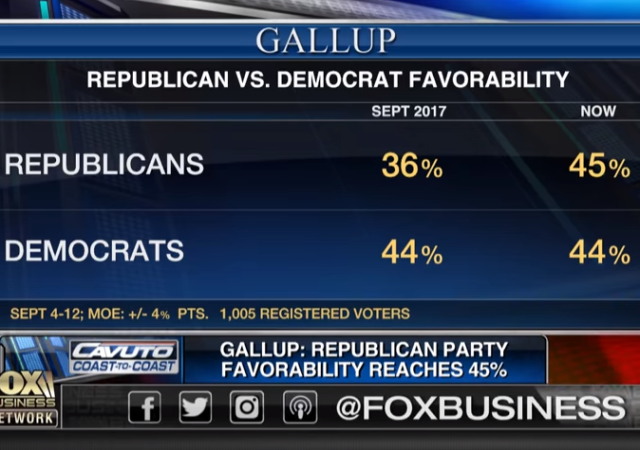 We’re now just a matter of weeks away from the 2018 midterms and the Republican party just got a very positive piece of news. According to a new Gallup poll, the GOP has reached its highest approval rating since 2011.

Forty-five percent of Americans now have a favorable view of the Republican Party, a nine-point gain from last September’s 36%. It is the party’s most positive image since it registered 47% in January 2011, shortly after taking control of the House in the 2010 midterm elections. Forty-four percent give the Democratic Party a favorable rating.

The parity in Republicans’ and Democrats’ favorable ratings marks a change from what has generally been the case since Barack Obama’s election as president in November 2008. Republicans have usually been rated less positively than Democrats over this time, with the Republican Party’s favorability rating for the last decade averaging 39%, compared with the Democratic Party’s 44%.

Only one other time in the last decade has the Republican Party had a significantly higher score than the Democratic Party. That one exception came in November 2014, immediately after elections that saw Republicans capture control of the Senate and expand their majority in the House, when 42% rated the GOP favorably and 36% the Democrats.

This could be a positive indicator for the midterms:

For the Republican Party, less than two months away from an election that could see them lose control of both the House and the Senate, gains in public favorability are a welcome sign. The party has been wallowing in favorable ratings below 40% for most of the last five years after rarely sinking that low in the previous two decades.

No matter how much or how little party favorability affects elections, the fact that Republicans are more likely to view their party favorably than a year ago can be considered a positive indicator for the party, particularly if a more positive image boosts Republican turnout.

The worst thing Republicans could do is take this poll for granted. The same turnout level as the midterms of 2010 and 2014 or more will be needed to retain control of the House and Senate.

Confirming Kavanaugh to the Supreme Court would also help tremendously. Failing to do so will be devastating.

Goodness, I thought the Feinstein, Harris, Gillibrand, Hirono Putsch was supposed to hamstring the Republicans.

Where do I go to report a possible jaywalking incident in 1978 by someone who could have been Kavanaugh? I can’t remember the city or the exact date and location. I’m not even sure the light was red.

And well deserved too.

President Trump just signed on to the Globalist Drug War. At the UN. At a meeting he sponsored. Who else is covering it besides me? The CTH (link at the link)

This may have something to do with it.

Dude, this is tiring and redundant. Just type, “yay pot!” and we’ll get it.

Turning every topic into a “yay pot” treatise is becoming spammy; worse, though, you don’t even know your audience. Do you really think your “yay pot” posts will change anyone’s mind here? Or are you just getting paid by the “yay pot!” post?

Back when they were petitioning to get recreation MJ on the ballot, I would often point out to the petitioners that “they themselves” were a pretty good argument for why it was a bad idea. Those with a few functioning neurons would get angry, but most of them didn’t get it at all. I look at recreational MJ the same way that I look at tattoos. It saves me a lot of time when people self-select themselves out of my life by displaying an obvious cultural difference.

In one 2 block area of the Clallam county seat there’s 6 or more pot stores – reader boards advertise their product – Craigslist occ. has a guy who advertises delivery of bud … sounds like a toker’s heaven, right?

We have serious homeless problem here – 3 hours west of Seattle by car or ferry – and the impact of whacked out druggies on medical services is potentially life-threatening. Last week I was taken to the ER with life-threatening symptom. My MD called ahead and I bypassed the waiting room which was full of druggies. Had it not been for that, I may well have waited 4+ hours for treatment – with the ER’s “take a number and wait your torn” policy that treats self-induced ODs and bad trips the same as any other medical emergency.

It’s adversely affected life and culture here enough that me and the Mrs. are making a 5 year or less plan to wrap it up here and make our last move to a reliable red state. It’s beautiful here – it’s my life-long home – but liberal “dogs are people too” loonies are turning the place into a veritable cesspool of crazy.

There are so many bad polls now, it’s hard to know which to believe. People end up believing the ones they want, and those aren’t necessarily true.

The only good polls are the secret ones used by candidates to make decisions. And they fail, often as not.

I do want to say however that the GOP would be more favorably viewed if it would actually do things. Imagine how better off the party would look if it actually kept it’s promises. Like repealing Obamacare. Voted 67 times to repeal it. Finally get a Republican POTUS and suddenly they don’t want to repeal it. It’s no wonder very few people view the GOP favorably.

A more accurate headline may be: President Trump pulls Republican RINOs up to their highest favorability in seven years.

And the polls told us it’d be President Clinton in a landslide. To the extent there’s anything to this, I suspect it reflects not so much favorability as “which political party do you loathe least today?”

Can someone send a memo to Mary Chaistain that she might be looking at rigged election polls that are in complete disagreement with the ones they don’t pay attention to like this one that shows people are going to the polls for Republicans?