Conflicting Signals as to Republican-Democrat Voter Enthusiasm for Midterms

Conflicting Signals as to Republican-Democrat Voter Enthusiasm for Midterms

As usual, it’s all going to be about turnout.

Voters in the left are extremely motivated to vote in the midterms this November. They are driven by rage. They’re angry that they lost the 2016 election, they’re angry that they’re losing control of the Supreme Court, and they hate Trump with the fire of a thousand suns.

People on the right recognize this and can make up the difference. Polls show both sides are fired up. First, let’s look at the left.

From the Pew Research Center:

With less than 50 days until the 2018 congressional elections, Democrats hold a 10-percentage-point advantage over Republicans on the generic ballot among all registered voters.

Today, 52% of registered voters say they support or lean toward the Democratic candidate for Congress in their district, while 42% say they prefer the Republican candidate.

The share of voters who say they support or lean toward the Democratic candidate is slightly higher than it was in June (48% then, 52% today), while the share who back GOP candidates is little changed (43% then, 42% now).

See the chart below:

This is the section of the Pew report which should concern right leaning voters:

Voters express record high levels of enthusiasm for a midterm

As the election approaches, a growing share of voters say they are “more enthusiastic than usual about voting” – and the share expressing this is now substantially higher than in any midterm election since the question was first asked two decades ago.

In June, 51% of registered voters said they were more enthusiastic than usual. Three months later, 61% say this, which is 14 points higher than the prior high for this measure (47% in October 2010)…

Among those who support Democratic candidates, reported levels of enthusiasm are much higher than in past midterm years: Two-thirds (67%) say they are more enthusiastic than usual; by contrast, fewer than half said this in midterms dating back to 2006. Among GOP voters, 59% say they are more enthusiastic than usual about voting – on par with the share saying this in October 2010 and modestly higher than in 2014. 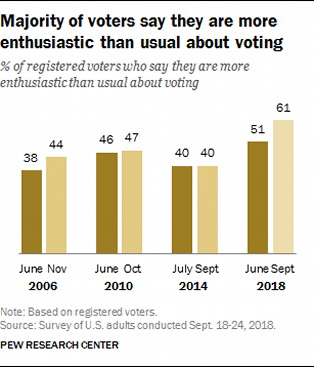 Now, let’s look at another poll, this time Gallup which suggests Republican voters are just as certain to vote:

Certainty of Voting Is Flat

Today’s heightened enthusiasm may not translate into higher turnout than in previous years, as a separate measure shows that Americans claim to be no more certain that they will vote in November than has been the case in previous elections.

Today’s level of certainty is consistent with Gallup’s early pre-election trends, from 1954 to 1982.

Still, Democrats and Republicans express a fairly high certainty of voting, with 72% and 70%, respectively, saying they are absolutely certain they will vote in November.

Overall certainty is suppressed by the low percentage of independents (43%) who are sure they will vote. This pattern is similar to 2014, perhaps reflecting independents’ desire to opt out of today’s polarized political environment. However, it differs from 1994 through 2010 when independents were closer to Republicans and Democrats in their certainty to vote.

In a way, the Democrats’ treatment of Supreme Court nominee Brett Kavanaugh has been helpful. It is an excellent reminder to voters of what life will be like if Democrats retake the House or Senate.

Anger can be a great motivator and the Kavanaugh circus is making people angry.

One thing that is not being captured in the media/Dem coordinated "Destroy Kavanaugh" campaign is how unspeakably angry it is making a huge percentage of the population. It is the one word people keep saying to me. Male and female. They are *angry.*

Trump supporters, Republicans, conservatives, and people of every other stripe on the right had better show up at the polls in November, or be prepared for the Democrat Inquisition of 2019.

I am an always republican voter, and after Graham’s speech, I am Waaaaaayyyy fired up.

Unfortunately, I live in Massachusetts, so my independent vote, my Libertarian vote or my republican vote just doesn’t matter. Such a shame that professional politicians here in Massachusetts don’t allow decent candidates to be on the ballot, and if one does finds their way onto the ballot, they “Ron Paul” them after the people have spoken.

As John Adams observed: Gentlemen we must hang together or we will surely hang separately.

If the right doesn’t get out to vote and loses the House that means Maxine Water’s crazy self will be the chairman of the Financial Services Committee. She would literally be issuing subpoenas to the White House on day one. It would never stop.

Though two years of Democrat insanity in the House may really sour people on them in 2020 I’d rather the country not have to suffer. The Dems will literally do everything they can to wreck Trump and the country will be caught in the crossfire.

After the 2016 election, why would anyone put any credence into polls? I don’t know of a single Trump supporter, or even a R-voter, who isn’t fired up to vote in this year’s election. They’re not just angry; THEY. ARE. PISSED. Royally so, too. Yeah, they’re angry at the spineless RINOs, but they hate the Left whom they view as pure evil.

There are plenty right here who are talking about not voting R this November. If they’re in swing districts or states, that would be a disaster.

I see you’re in NYC, so that explains this comment: “There are plenty right here who are talking about not voting R this November.”

I live in Upstate NY where you’re apt to hear a different sentiment.

We watch every one on tv.

I live in one of those two and unfortunately a few blocks from the venue. I plan to hid the car and board up the windows.

Here in NYC Dems are certainly fired up. Turnout in the D primary two weeks ago was extremely high.

As long as one party controls the population centers like Clinton did, it takes the entire rest of the country to negate that.

Out here on the LLano it looks like Texas is turning blue. I actually saw a Beto bumper sticker this morning. No, really!

That is why we xto kick all the illegals out. It amounts to an invasion.

I’m not angry – I’m furious! I’m an independent voter and though it doesn’t do much good to vote conservative in my home state of California, I’ll surely give an earful to my elected (not by me!) representative, Diane Feinstein. Appalling behavior on the part of Democrats, just appalling!

Our President is doing a masterful job. And deserves our support,

President Trump just signed on to the Globalist Drug War. At the UN. At a meeting he sponsored. Who else is covering it besides me? The CTH (link at the link)
http://classicalvalues.com/2018/09/the-dea-and-the-drug-cartels-own-trump/

“See, if you look at the drug war from a purely economic point of view, the role of the government is to protect the drug cartel.” – Economist Milton Friedman (1991)

I thought he was going to drain the Swamp – not build it.

Fifty-eight percent? That would be a neat trick in a nation with persistently low average turnouts of 20-25 percent in nearly every election.

Plus, voters are conflicted on many levels. Here Missouri, we had the Prop A ‘right to work’ vote this past August. ‘NO’signs were everywhere. It was a white hot issue, and drove turnout to a higher than normal 37% of registered voters.

Two-thirds of those voters sent Prop A down to defeat. With the mid-terms looming, those same voters who had Prop A ‘NO’ signs in their yard now advocate voting for Libertarian / Republican candidate Jacob Turk – who’s made a career out of losing to Rep. Emanuel Cleaver(D-MO 5).

They vote for unionism during a special August election, but now post yard signs for a Libertarian / Republican candidate for the upcoming mid-term election. How does that work, exactly?

With the rabid odiferous orcs and their hatred of all things Trump on the Left, coupled with the backstabbing ‘no wall, fund planned parenthood, no obamacare repeal’ RINO cucks on the right, I see similar white hot intensity with the upcoming mid-terms.

Yes, there’s conflicting signals, but I see more green lights to speed to the polls on the Left than I do on the right. The insane clown posse who tried to crucify Kavanaugh these past weeks won’t sway anything, imho, and will be forgotten come November.

Trump ain’t on the ballot, but Trump Derangement Syndrome is a hell of a drug, and the rabid, odiferous ocrs of the Left are addicted.

Jefferson had said that sometimes the American people get it wrong, but eventually they will get it right.

I am hoping they will get it right this November, but I have concerns. The left has gone almost fully insane to a point where you cannot even talk to them, let alone try to show a point to them.

Law means nothing over feelings to far to many of them. I know a woman who had her husband caught up in the MeToo bit. He was accused of some really nasty actions and deeds, falsely. It took 6 months of investigation to have it resolve that the accusation was totally false. It cost them tens of thousands of dollars. I asked her if she thought what Kavanaugh was being put through, given your own experience, was fair. She said, “I believe her”. I brought up her lies. I brought up that her accusation wasn’t backed up by the people she specifically named as being there. I brought up Kavanaugh’s calendar. It didn’t mean a thing. Kavanaugh was being accused because he was guilty simply because of this woman Ford saying so.

I told her that I was sorry then that her husband got off from the accusations against him, because obviously he was guilty, the woman said so. Her response was, well, that is different, he wasn’t a Republican and I know they are evil.

This is the insanity we are dealing with.

I know I am pissed off. I am so angry and motivated to vote, but so is the left. And I believe, from seeing so many instances where the only explaination for the counts is that massive voter fraud took place. Given the performance of them in this circus called a hearing, I put nothing past them to cheat, steal, lie, or kill in their effort to have power. God help us all.

I warned you all in 2016 that traditional polling methods will not accurately predict voting patterns anymore. Not only have the voting demographics changed from a Republican-Democrat, liberal[conservative pairing to an establishment-anti-establishment pair, but, the pollsters are fudging the polls to achieve specific results. When it comes to polling, furgiddaboutit.

I don’t know anyone that would cooperate truthfully with a pollster. They are more about nudging the electorate than anything.