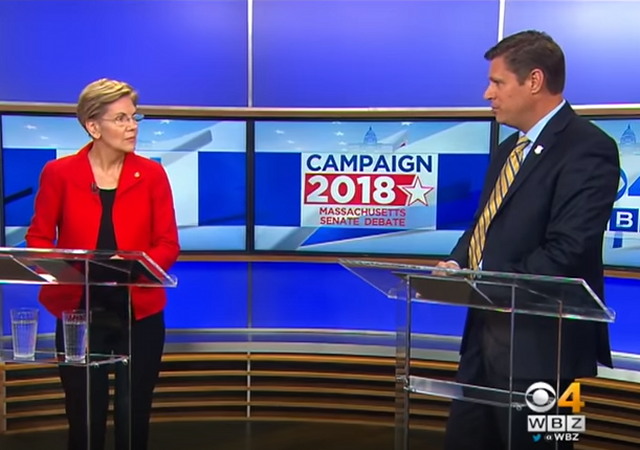 Elizabeth Warren and her Republican challenger Geoff Diehl met for their first debate on Friday night. Warren’s DNA test came up right away, as she tried to spin it into an example of transparency.

She also did her best to tie Diehl to Trump, but the most notable jab came from Diehl who hammered Warren’s presidential aspirations.

The Associated Press reports, via Boston.com:

Warren, a possible 2020 presidential candidate running for a second six-year Senate term, defended her decision to release DNA test results this week that provide some evidence a Native American is in her bloodline.

Warren also said she released the tests for the same reason she put 10 years of her tax returns online and released hiring records from her career as a law professor.

“The whole notion of confidence in government has really gone to a low point and so for me, what I’ve done is I’ve just tried to put it all out there,” she said. “I am an open book.”

This was the pivotal moment:

Diehl said Warren has taken her eye off her day job representing Massachusetts by exploring a White House run. Warren has said she’ll take “a hard look” at a 2020 run after the midterm elections.

“You are running for president. Everybody knows,” Diehl said. “It’s not a secret at all.”

Another notable moment can be seen below. Warren boasts of being an open book, having put out her tax information, her family history and saying “shoot” she even took a DNA test. She then cites the Boston Globe, her biggest media fan and greatest defender, as evidence:

“The Boston Globe has done an extensive analysis, and come up with the fact that nothing in my background ever made any difference in my hiring.”

Professor Jacobson has done an extensive analysis of the roll-out of Warren’s DNA test and the role the Boston Globe played in it, which you can read here.

Diehl is correct, Warren is running for president, and if the people of Massachusetts re-elect her to the Senate, she will be busy with other things very shortly.

If polls are to be believed however, Warren has little to worry about. According to Real Clear Politics, she is leading Diehl by double digits.

If polls are to be believed however, Warren has little to worry about. According to Real Clear Politics, she is leading Diehl by double digits.
Scott Brown did win a United States Senate seat in MA. One never knows, particularly after Kavanaugh and the DNA fiasco.

The voters of MA had no problem keeping Kennedy in the Senate. If leaving a campaign worker to drown in your car won’t turn them off, no bogus assault claim will.

Oh yeah, good old Teddy, The Lion of the Senate. Back when colluding with the commies was kewl. And actually happened.

Attempted colluding. Andropov turned him down.

Did every voter in Massachusetts vote for Kennedy and Warren? When you use a broad brush you ignore and insult many good people who do not support these leftists.

Warren’s self-inflicted wound comes days before the election. Teddy Kennedy had the family name, and a full year before he had to stand for election.

Real Clear Politics had Clinton beating Trump in the last week before the election in November 2016. Voters don’t tell pollsters who they will get their vote because voters are aware that MSM is behind pollsters

On the plus side, even though my wife and I will not be voting for her, with her distraction of the presidential run, she won’t be able to cause much mischief in those two years. It is a shame that Massachusetts voters selected her and that Chevy Chase Maryland resident to represent this Commonwealth.

Yes Massachusetts, where we have two of the worst Senators in the country, a fraud and dim wit.

You have great ones compared to mine. I’m from New York.

Or mine, in Washington state -> Patty Murray (D-Dimbulb) and her mini-me, Maria Cantwell (D-RealnetworksTech).

Patty Murray looks like Cousin It from the Addams Family with a haircut.

Up next in the batters circle: Arizona

Ha! Lightweights. I’m in California. You guys are lucky. And we have a deep bench…

Elizabeth Warren may be a con, probably the worst imaginable…but the people that are electing her are a real pathetic bunch. They are not worthy of the label “citizens”

If Warren represented a district or state anywhere west of the Appalachia she’d not even register on the political seismometer – she’s uninteresting and lacks charisma – but since she’s from Massachusetts the press (courtiers), being both lazy and caste-oriented, latched onto this boorish member of the coastal landed gentry.