“Based on its investigations, WebTrends determined that Swetnick had engaged in inappropriate conduct…” 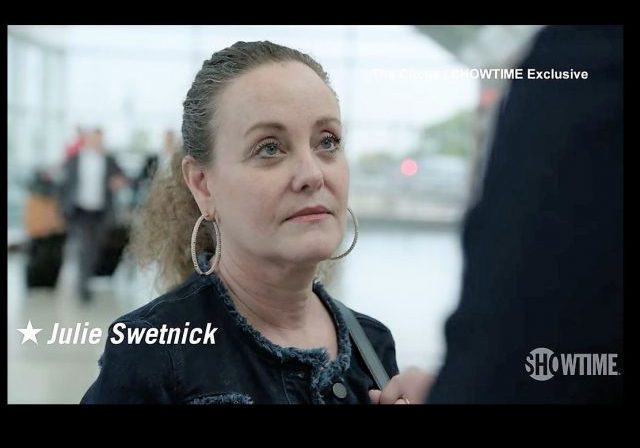 Julie Swetnick, the woman who has accused Brett Kavanaugh of leading a group of men to gang rape girls, faced sexual harassment allegations from a former employer back in 2000.

This is the woman represented by attention-seeking lawyer Michael Avenatti.

The web analytics company WebTrends sued Swetnick back in 2000 and also accused her of lying about graduating from John Hopkins University.

The company accused her of “inappropriate conduct” at work. She then made “false and retaliatory allegations” against two male co-workers.

Swetnick’s alleged conduct took place in June 2000, just three weeks after she started working at WebTrends, the complaint shows. WebTrends conducted an investigation that found both male employees gave similar accounts of Swetnick engaging in “unwelcome sexual innuendo and inappropriate conduct” toward them during a business lunch in front of customers, the complaint said.

Swetnick denied the allegations and, WebTrends alleged, “in a transparent effort to divert attention from her own inappropriate behavior … [made] false and retaliatory allegations” of sexual harassment against two other male co-workers.

“Based on its investigations, WebTrends determined that Swetnick had engaged in inappropriate conduct, but that no corroborating evidence existed to support Swetnick’s allegations against her coworkers,” the complaint said.

After a WebTrends human resources director informed Swetnick that the company was unable to corroborate the sexual harassment allegations she had made, she “remarkably” walked back the allegations, according to the complaint.

Then Swetnick claimed sinus issues, which led her to take a “leave of absence from the company.” The Daily Caller continued:

WebTrends said it made short-term disability payments to her until mid-August that year. One week after the payments stopped, WebTrends received a note from Swetnick’s doctor claiming she needed a leave of absence for a “nervous breakdown.”

The company said it continued to provide health insurance coverage for Swetnick, despite her refusal provide any additional information about her alleged medical condition.

In November, the company’s human resources director received a notice from the Washington, D.C. Department of Unemployment that Swetnick had applied for unemployment benefits after claiming she left WebTrends voluntarily in late September.

“In short, Swetnick continued to claim the benefits of a full-time employee of WebTrends, sought disability payments from WebTrends’ insurance carrier and falsely claimed unemployment insurance payments from the District of Columbia,” the complaint states.

She wouldn’t tell them why she claimed those benefits, but decided to send letters to WebTrends and accused two male co-workers of sexual harassment. She also said that the HR coordinator tried to get her “privileged medical information” for months.

But the fraud began before all of this because she supposedly put John Hopkins University on her resume. The complaint said “the school had no record of her attendance.”

WebTrends “voluntarily dismissed the action with prejudice” a month after filing. The company didn’t respond to The Daily Caller for comments.

Avenatti lashed out at the report:

The complaint against his client was “[c]ompletely bogus which is why it was dismissed almost immediately,” Avenatti told TheDCNF in an email. “The lawsuit was filed in retaliation against my client after she pursued claims against the company.”

Kemberlee did a fantastic job blogging about all the holes in Swetnick’s claims against Kavanaugh.

Earlier this week, a report emerged that Richard Vinneccy, one of Swetnick’s ex-boyfriends, filed a restraining order against her. From Politico:

According to Vinneccy, Swetnick threatened him after they broke up and even after he got married to his current wife and had a child.

“Right after I broke up with her, she was threatening my family, threatening my wife and threatening to do harm to my baby at that time,” Vinneccy said in a telephone interview with POLITICO. “I know a lot about her.”

She also accused a former co-worker at a different company of sexual harassment.

New: A decade ago, Julie Swetnick made a sexual harassment complaint against her former employer, New York Life Insurance. Representing her was the firm run by Debra Katz, who now reps Christine Blasey Ford. She was ultimately paid a financial settlement. https://t.co/goobX4fivL pic.twitter.com/UJ1LFRRc6M

The Circus on Showtime will air a full interview with Swetnick on Sunday.

WAJ adds: This woman seems like a nightmare, basically a Glenn Close in Fatal Attraction nightmare. Multiple sexual harassment claims by and against her, as well as a restraining order against her.

Don’t worry, the 7th FBI investigation will get Kav the Rape Gang Leader and drug dealer.

Corroborating evidence of credibility concerns apparently only apply to conservatives in Avenattiland.

Avenatti is such an assclown!

If this is all the Dems have, bring it!

It’s a benefit of the doubt now rather than beyond a reasonable doubt that guides the legal understanding of people.

Her hair…. the reason to use only UL approved vibrators.

I find this shocking.
Her accusation of 10 gang rape parties organized by Catholic prep school kids seemed so believable.

Yikes. But when you see she hooked up with avanatti it’s like two disgusting despicable peas in a pod.

Avenatti needs to write a book about practicing law from the gutter.

Yikes. But when you see she hooked up with avanatti it’s like two disgusting despicable peas in a pod.

Only need to replace “seems like” with “is” and it will be correct. 🙂

This isn’t the girl I saw before…. What happened?

Main photo got changed out for the Showtime capture a few hours ago.

Remember the picture of Thugvon, in a red Hollister shirt, maybe 11-12 years old, when he was in fact 17 and old enough to be prosecuted for assault?

Tween and ten age children are the most difficult to raise, it is a shame that his sorry excuse for parents did not give him a proper balance of tough love with love. Once there was a ghetto lottery to chase, they were willing to cooperate to rake in money. They are much like Palestinian parents who raise their children to be dead martyrs for profit.

A woman who uses her gender for scams, and a liar.

First, let’s stipulate that this poor woman is a nutter and a liar.

Second, let’s be honest. Republishing a report based on a meretricious (and it obviously WAS) lawsuit is no better or different than carrying a rumor. It’s essentially salacious gossip.

Nothing that WebTrends alleged was vindicated, and it was apparently without merit.

As pretty much every real attorney who posts here has affirmed, you can sue anybody for anything. Where it goes from there is the nut-cutting.

OK, let’s stipulate that the poor woman is a nutter and a liar. What is your opinion of lawyer who would use her to serve his Klown Kar 2020 political ambitions? Should he keep his law license?

Object to the compound question!

I deplore Aventti as a person.

Why should he lose his law license? State the ethical reasons. I might agree. You or me not approving of him won’t get it.

Has Avennati behaved toward his client as a competent and ethical (and there are many) attorney would? Going public, not going to the Maryland police agencies?

That would not be something you or I can determine. He has a client, and he may be acting according to her direction.

After all, isn’t an attorney’s duty to his/her client? ‘Splain to me, Rags, how Avennati has served his client.

I may not be getting the attorney’s name right but I don’t give a s***. He’s scum.

I can’t say. Neither can you. See above.

I have to ask …
The other photo of Julie Swetnick (the PR photo that I assume Avenatti sent out) seems the be from the last century, based on the photo used here.