The indictment includes his son Cameron and the father of Cameron’s fiancee.

Federal prosecutors announced an indictment (pdf.) against Rep. Christopher Collins (R-NY) on insider trading charges and lying to the FBI along with his son Cameron Collins and Stephen Zarsky, the father of Cameron’s fiancee.

The charges stem from the “securities of Australian biotechnology company called Innate Immunotherapeutics, where the congressman served on the board.”

The indictment says that “Innate’s primary business was the research and development of a drug called MIS416, which was intended to treat Secondary Progressive Multiple Sclerosis.” The company completed the drug trial in June 2017. The drug gave the company hopes of a massive profit since the market has “few or new alternative treatments” for the disease.

The drug failed the drug trial and Innate’s stock price dropped 92% after the public announcement.

The three men had access to nonpublic information and allegedly used that to their advantage:

The indictment asserts that Collins received the tips as he attended the Congressional Picnic: 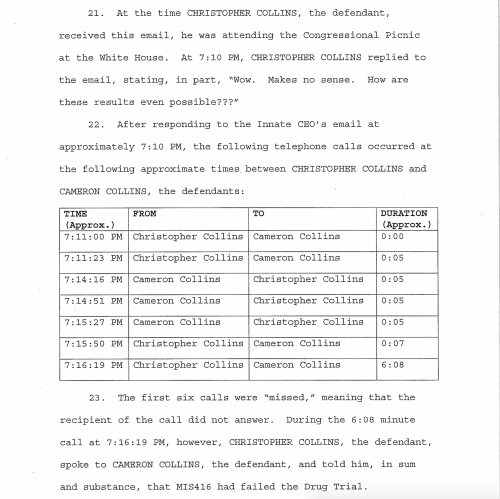 The men allegedly took these actions: 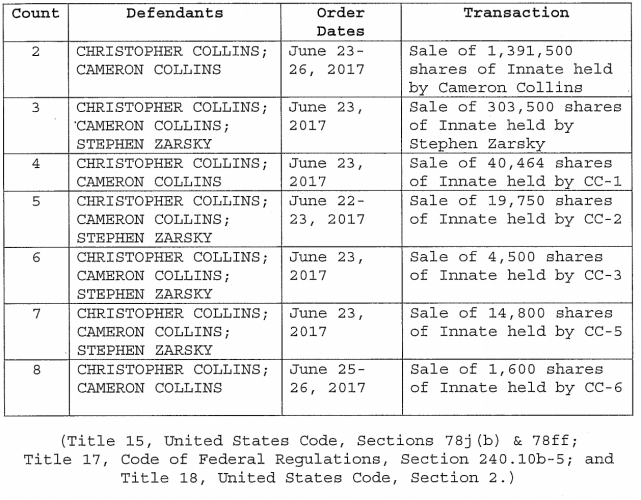 The indictment alleges that Rep. Collins then “took steps to prevent the public from learning that” his son sold quite a bit of his shares before the public announcement, including a statement “written in a manner designed to mislead the public into believing that” Cameron did not do it.

U.S. Attorney for the Southern District of New York Geoffrey Berman held a press conference. Here are some snippets:

Berman: “The Congressman knew he couldn’t sell his own shares for personal and technical reasons” including b/c he was under a House ethics investigation. “The crime he committed was to tip his son Cameron” who sold over 1 million shares.

Berman: The FBI asked to interview @RepChrisCollins and “instead of telling the truth he lied,” as did his son, and son’s father-in-law. “By lying to the FBI they compounded their insider trading crime with the crime of criminal coverup.”

Wow: FBI says that the alleged Collins conspirators accounted for “over half” of the trading activity on Innate for two days after @RepChrisCollins shared insider information.

Collins surrendered this morning in Manhattan and should “appear in federal court in lower Manhattan today in the day.” Collins’s website posted this statement from his attorneys:

“We will answer the charges filed against Congressman Collins in Court and will mount a vigorous defense to clear his good name. It is notable that even the government does not allege that Congressman Collins traded a single share of Innate Therapeutics stock. We are confident he will be completely vindicated and exonerated.

Congressman Collins will have more to say on this issue later today.”

Yeah, the indictment says Rep. Collins did not “trade shares himself, in part because he was already under investigation for his relationship with Innate by the Office of Congressional Ethics.” The late Rep. Louise Slaughter (D-NY) asked the House Ethics Committee to investigate Collins in 2017. The committee’s report “did not punish Collins” nor did it “exonerate him.”

Politico described Collins’s 27th district as “the most Republican in the Empire State and had been considered a reach even as the blue state prepares for a blue wave.” Democratic Governor Andrew Cuomo has set his eyes on flipping the seat despite the stats.

Democrats chose Grand Island Supervisor Nate McMurray to challenge Collins for the seat. Erie County Executive Mark Poloncarz believes Collins’ indictment could swing the seat towards the Democrats and it put the district “on the radar all across the country.”

The Democrats shouldn’t get too excited. The Cook Political Report had the seat as Solid Republican, but the indictment only changed it to Slightly Republican with an R+11 rating

Just a casual observation but it seems like GOPers in deep blue states get in trouble more often. Not sure if they are just trying to keep up with their Dem peers or what. I have little doubt that all things equal, the odds are much higher for a state AG to go after a GOP with accusations and indictments. Which would be fine if there was evidence of balance.

Overall states like IL an NY, deep blue. have produced some GOP candidates and elected officials that really don’t fit on the national stage. Guess you could say that about other states at times like LA or AL perhaps.

When the DOJ is involved,indictments seem to come at the worst possible moment. Here in Alaska, Ted Stevens lost a very safe seat when he was found guilty be a D.C. jury. (I still voted for him.) The guilty verdict got tossed when the prosecutors were found to have not disclosed some information favorable to Stevens. But Begich won and was a disaster to our state and the nation when Obamacare passed by one vote.

The corruption in DOJ has been around for a long time. It is time to drain the sewer along with the rest of the D.C. Swamp.

If only it were cattle futures.

For all but the most serious Class A felonies, I would like to see the prosecuting agency gain permission of the appropriate Chamber of Congress before an indictment is issued. Politics is far too involved. I remember Tom Delay and Kay Bailey Hutchenson.

The problem with that is that the majority in each chamber would routinely approve indictments of minority members and deny those of its own members.

He should plead the hillary klinton defense.

Man, you really have to outdo yourself to get noticed pulling these kinds of shenanigans in the rat’s nest that is the legislative branch.