Republican Balderson has the Lead in Ohio Special Election, But It’s Too Close to Call

Republican Balderson has the Lead in Ohio Special Election, But It’s Too Close to Call

Is a slight win a cause for the GOP to worry going into November? 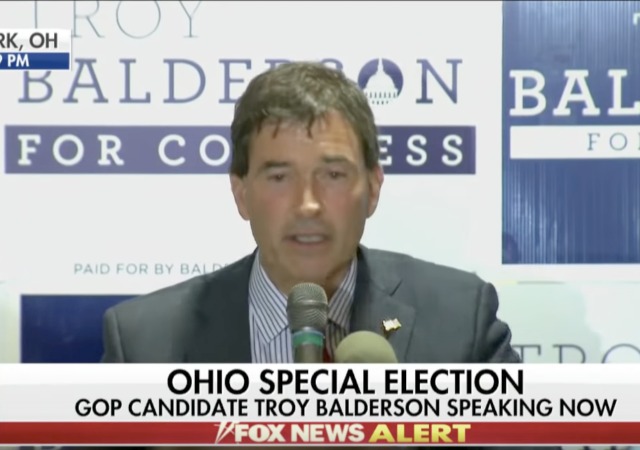 Republican Troy Balderson has a 50.2% lead in Ohio’s 12th District special election over Democrat Danny O’Connor, who has 49.3% of the vote, to take over for Republican Rep. Pat Tiberi. The Republicans have held this seat for decades, but the Democrats saw an opportunity to give life to their supposed “blue wave” and poured an insane amount of money and attention into flipping this seat.

Despite the vote count, both sides have claimed victory on this one. Yes, even the Democrats. They got so close, but does it matter? Should the Republicans be worried that it took a slim margin to win a historically Republican seat? 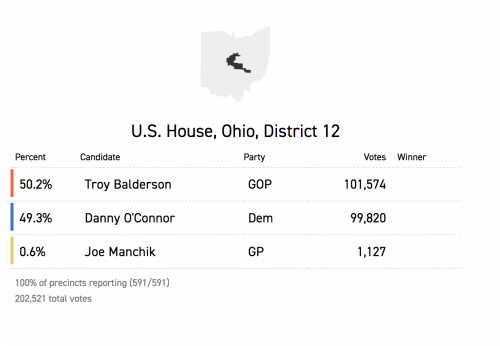 The district still needs to count 3,435 provisional ballots and 5,048 outstanding absentee ballots. The Ohio “state board of elections cannot begin counting those additional ballots until the 11th day after the election, August 18th.”

According to Ohio law, recounts are automatically triggered when the final margin of victory is less than 0.5% of the ballots cast (0.25% for statewide offices). The margin now (~0.8%) comes close to that trigger level. If this goes to an automatic recount, we might also see a challenge too, based on the recount outcome. That would create a weeks-long mess that could take us to the actual midterm election, where Balderson and O’Connor will have a rematch.

Say the results stick and Balderson wins. Does it matter that the Democrats came close? Should the Republicans worry?

I get that Dems have a huge tailwind. But Twitter seems to forget that they have to WIN these races. Coming close doesn’t matter. And with attention divided all over on Election Day, it’s gonna be harder to generate these media-driven focused special election tailwinds. #oh12

Ambinder is 100% correct because Ohio’s 12th district will have less attention in November than it did on Thursday, August 7, 2018, when both men will go head-to-head again for the general election.

Re: #OH12 – Balderson will win despite the urban (Delaware/Franklin) share of the vote approaching 65%. It’s at 63.7% now and all the votes left are in Delaware. Was 59% in 2012. So rural Trump voters turned out at much lower rates and the Dems STILL lost. THAT’S big news.

At the same time, though, this is a Republican seat. I don’t think the Democrats should tout it as a moral victory, but the Republicans should look at strategy going towards November.

The New York Times published an article on August 6th about the Republican strategy in this district:

But Republicans say their messaging is intended to polarize the electorate and exploit the national Democratic Party’s leftward shift, jolting complacent conservatives and denying Mr. O’Connor, an easygoing 31-year-old official in Franklin County, the chance to win over disaffected Republicans.

Mr. O’Connor’s campaign has projected an air of defiance, tinged with amusement, at the onslaught against him. One wall of his headquarters, in a converted clothing store in Columbus, is collaged with brutally negative Republican campaign mail: Two mail pieces show images of armored police officers, with text claiming Mr. O’Connor, who favors stricter gun regulation, supports seizing legal firearms. Another depicts Mr. O’Connor hanging from marionette strings held by Ms. Pelosi.

Echoing Representative Conor Lamb, the upset winner of a March special election near Pittsburgh, Mr. O’Connor vowed early not to support Ms. Pelosi. He said in an interview that, by focusing on her, Republicans signaled their own weakness.

But in a stumble that delighted Republicans, Mr. O’Connor briefly appeared to put an asterisk on that position late last month. Insisting on MSNBC that he opposed Ms. Pelosi, Mr. O’Connor allowed that he would ultimately back the consensus Democrat for speaker over a Republican on the House floor — a formula that theoretically preserves Ms. Pelosi as an option.

Do you notice what’s missing on those ads that O’Connor displayed in his office? The economy. Yes, I value the second amendment and I love my guns. Yes, I despise Nancy Pelosi and get sick to my stomach at the thought of her leading the House again.

That doesn’t change the fact that the majority of people care about the economy and holy cow the economy is a gift to the Republicans. Use it while you still can because the tariffs might change all of that.

Look at all these jobs reports from President Donald Trump’s tenure. Unemployment is at 3.9% and hardly anyone has faced layoffs. There are more jobs than people seeking jobs. Wages went up 2.7% compared to a year ago.

Don’t worry. If it’s close there will be a trunk load of “missing” absentee ballots suddenly appear.

notamemberofanyorganizedpolicital in reply to harleycowboy. | August 8, 2018 at 2:36 pm

Who was that posted here a while back that Hillary started s recount in PA or WI and boxes that supposedly had 600 ballots for her ended up containing 3 or 6 for her?

Ambinder has it right. With individual seats at stake Dems operations are very good at focusing on elections. The same thing can’t be said in November when they have to do it in 100s of places.

No matter…using Soviet agitprop the Dems will say that for the leading candidates, the Den came in second and the Repub came in next to last.

There is still plenty of time to judge the election. Many voters were mistaken in their selection and correction of the mistakes was needed. Honest mistakes, honest corrections.

This isn’t Africa…here it is one man, one vote, many times.

It is cases like this that makes it absolutely vital that Republicans get out to vote so that contests are taken outside of the margin of Democrat fraud!

If you stayed home cause you couldn’t be fucked to vote then thats just as bad as voting for a Democrat.

And the Democrats need to overcome voter suppression.

You mean like getting by the Black Panthers guarding the polling place?

I’m more than a little worried. The Dems hammer away at pre-voting, so the density of (D) votes in that pile of uncounted ballots…

Does it matter? The dumbass R’s can’t (or won’t) use a majority, even when they have one.

Looking at the data from the Ohio State web site for the 16 election (Tilbert) and comparing it to last night’s election data in the OP, I see:

It’s hard to believe that the Rs aren’t energized when you consider the fine job the congressioinal leadership of the party is doing. /sarc

Nope not possible in an off term primary. In August. It’s voter fraud the tried and true democrat way. How do they get 100% or even 125% of the vote. Fraud of course.

If anyone would challenge them they would fold. But they scream suppression and Bull Connor and the GOPe folds like a a cheap suit every single time.

Mary asks rhetorically: Is a slight win a cause for the GOP to worry going into November?

My wife was slightly pregnant once . . .

When this phrase occurs in the reporting, typically in 2-3 days a few uncounted votes are discovered. Then a ‘re-count’ is demanded, after which even MORE votes are discovered…and the Democrat wins the election. This is how Al Franken was elected in Minnesota, and Patty Murray in Washington State was elected. Those are the two I recall, but there are probably more.

notamemberofanyorganizedpolicital in reply to C. Lashown. | August 8, 2018 at 2:30 pm

The resist-we-much bunch is all-in on every issue – every election. Maybe this is just an indicator that the resistance isn’t as big a factor in the midwest as it is in the NE and left coast. Doesn’t mean the R’s can can coast to the finish line – it’s ‘coasting’ that gifted the D’s with AOC. Wouldn’t be at all surprised if the bulk of any ‘blue wave’ flippage is in the NE and left coast where the resistance is on their home-turf and gets all the press. The resistance has a tough-sell where the air is still free.

Actually I do think the narrow win in Ohio, which may not even hold, should make it clear the inside-the-beltway GOP types tha they have reason to worry. It will also cause them to misdiagnose the problem. They’ll convince themselves Trump is the problem.

No, the problem is them. John McCain in 2010, when he faced a stiff primary challenge:

McCain would have made a TV ad in which he shot an illegal trying to cross the border if that was what it was going to take to hold on to his seat. But as soon as he was safely reelected he declared it would be “stupid” to actually complete the fence. Have any of you been down to the border? The “fence” is the stupidest thing you have ever seen. It’s like the toll booth in Blazing Saddles. There it is in all it’s glory, in the middle of nowhere with miles and miles of hell’s creation wide open for you to pour around.

As one border rancher who has since quit because it’s too dangerous drily put it, “I don’t think the feds understand how fences are supposed to work.”

And here we are in 2018 and still no fence. Trump promised to build a wall, which largely got him elected because we want a f***ing wall or a fence or something. Trump means it. Ryan and McConnell assure us they’ll fund it. After the November election.

They’re never going to do it. The want open borders. I lost track of how many times the inside-teh-beltway GOP sent bills to Obama to be vetoed repealing Obamacare while TFG was in office. Trump gets elected and says he’ll sign such a bill. Now, it’s just too hard.

Boehner and McConnell’s first excuse is that their hands were tied because they only controlled “one half of one third of government.” So the voters gave them control of the entire legislature. Then Ryan and McConnell said their hands were tied because they didn’t have the WH. Now the GOP controls Congress, the WH, and if you view the SCOTUS as a political branch with Kavanaugh they control that as well.

Still Obamacare lives on. Still no wall. Not even a fence. Why bother?

I was kidding. The inside-the-beltway GOP statists no doubt see the narrow win, if it holds, not as a reason to worry but as a reason to rejoice. They’ll orgasm if the Dem pulls it off. It’s pretty freaking obvious that all they wanted was a well paying, comfortable sinecure as the junior partners in the Democratic Socialist scheme for America.