“The votes from a portion of one voting location had not been processed into the tabulation system.” 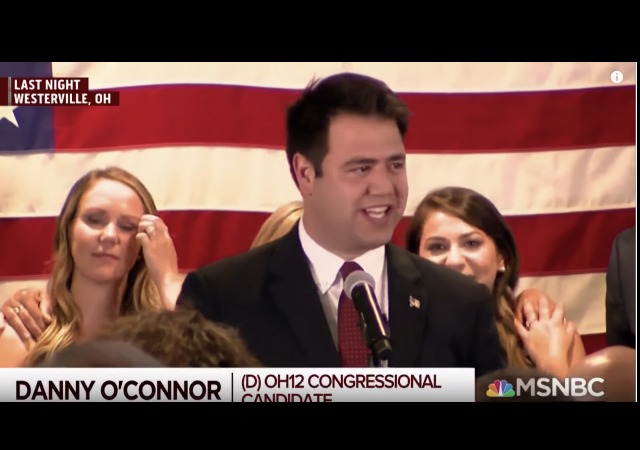 The race for Ohio’s 12th congressional district was too close to call after the polls closed on Tuesday and after Wednesday, it tightened a little more. From Cincinnati.com:

Election officials in Franklin County found 588 previously uncounted votes in a Columbus suburb. The result: O’Connor had a net gain of 190 votes, bringing the race’s margin down to 1,564.

“The votes from a portion of one voting location had not been processed into the tabulation system,” according to a Franklin County Board of Elections news release.

Balderson declared victory Tuesday night in the closely watched central Ohio race. But O’Connor says he’s waiting for all votes to be counted.

That includes 3,435 provisional ballots and 5,048 absentee ballots, which will be tabulated by Aug. 24.

We're confident DANNY WILL WIN once ALL the votes are counted, but we spent EVERYTHING we had on the Special Election.

Please donate $5 to make sure EVERY LAST VOTE is counted fairly.https://t.co/c4xUZd1ngr

Balderson is backed by President Donald Trump and Ohio Gov. John Kasich. The race was surprisingly close for a district that Trump won by 11 percentage points in 2016 and Republicans have held for decades.

If the final results show a margin of 0.5 percent or less, state election officials will hold an automatic recount.

The surprise is that the found ballots did not contain enough votes to push the D into the lead. Or…. Maybe that is all they need to cover potential errors in their salting of the uncounted provisional and absentee ballots.

And they seriously expect us to fall for this B.S. again.

It’s not widely appreciated that the Civil War was caused by the near-certainty of D’rat voter fraud.

Illinois D’rat Sen. Stephen Douglas introduced the Kansas-Nebraska Act in Jan. 1854. This repealed the Missouri Compromise of 1820, which, among other things, limited on geographical grounds which territories could be admitted as slave states. The Kansas-Nebraska Act would allow new states to determine by popular vote whether they would be free or slave states, thus making it possible for the D’rats to pack the polls with ringers and declare any state a slave state (or it would, eventually; in 1854, the K-N Act strictly only applied to Kansas and Nebraska). Such shenanigans are easy enough to do when there’s no voter I.D. [Extra Credit Question—which modern Party fights “voter ID” tooth-and-nail?]

Without the Kansas-Nebraska Act and the obvious enabling of D’rat fraud, there would have been no Republican Party, no President Abraham Lincoln, no Southern secession, no bombardment of Federal forts, and no Civil War. Q.E.D.

I’m sure that everything is on the up and up with this… Hey, I just found 500 uncounted votes for Balderson on the floor of my closet!

I was cleaning out my mom’s stuff after her passing. I found, among other things, a ballot box where Adlai Steveson got 100% of the votes!

So someone was ready for Adlai’s third run in 1960, eh? Unfortunately Kennedy beat him to the nomination.

The Hildabeast plans to not only equal Stevenson’s number of nominations, but exceed it by being nominated and running as the Democrat for President three times. That would set several records: Most times nominated, first woman to be nominated three times, first person to lose the election three times and the oldest ever Democrat nominee for President.

Please donate $5.00 every fiver we receive will buy 1 vote please protect our democracy

Was my first thought too!!!

I cannot recall a single instance where there have been “found uncounted votes” when a Democrat was not in the process of losing an election. Oddly enough, when tallied, only the election in contention was effected….. Things that make you go Hmmmmm…..