“The only police report filed from the Kavanaughs’ residence was in 2015, and it involved the family’s Jeep Grand Cherokee that was stolen.”

The media will stop at NOTHING to find something to use against Judge Brett Kavanaugh, the Supreme Court nominee. One publication wants information on his baseball habits. The New York Times and Associated Press sought work emails of his wife Amy.

Now The New York Times wants all 911 calls placed by the Kavanaugh from the past 12 years.

The publication’s will probably come up empty, according to NTK Network:

The New York Times recently filed a request under the Maryland Public Information Act (PIA) seeking any 911 calls that were made from Judge Kavanaugh’s house from 2006 to the present day.

The only police report filed from the Kavanaughs’ residence was in 2015, and it involved the family’s Jeep Grand Cherokee that was stolen. 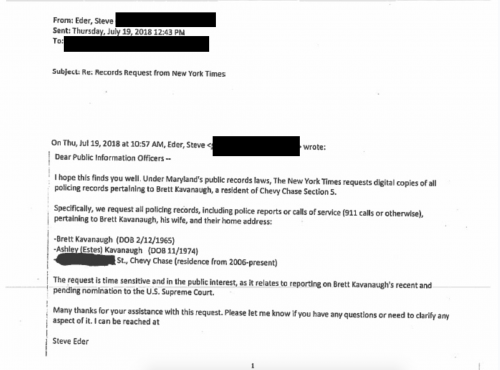 GIVE. IT. UP. I am so sick of the media going after stories that do not exist and will have no bearing on his future job on the Supreme Court. I mean, how many times do I have to repeat myself that they can start with his past rulings on the 4th Amendment? You know, what he will actually do on the Supreme Court?!

Oh yeah, that’s not sexy enough. I hate how this country and the MSM has gone so tabloid-like. In my piece about the NY Times and the AP going after Kavanaugh’s wife, I mentioned a blog from Professor Jacobson. He wrote
about how The New York Times Editorial Board encouraged “Democrats to go all Godfather” against anyone President Donald Trump nominated. The Editorial Board wrote:

When and where will it end? I believe it will end in bloodshed, and our nation will truly be torn apart……and we will be blamed for inciting the violence.

Not when we win.

I believe one of Obama’s goals was to push a race war, inciting violence through his attacks on the police. And to push toward Civil war with his shredding of the Constitution while the Republicans did nothing to even attempt to stop him.

We see how they are trying to stop Trump with almost every action being brought to court, yet it was rarely done with Obama’s actions, and even then, we had a SCOTUS who couldn’t be counted on not to legislate from the bench.

I believe the left wants a second Civil war. War is the means the left uses to replace current systems of government in the fastest way possible. It is a big reason behind why they are pushing gun control and are rabidly against Voter ID laws.

If the Left truly wants a new civil war it is prima facia proof of their mental instability. The result would be the same as someone’s goldfish deciding to go to war on the humans who maintain their tank, condition their water, and keep them fed: both imbecilic and impossible! These are the same people who talk about “high magazine cartridges” and AR-15s being “semiautomatic machine guns”!

How about Ginsberg’s ambulance calls?

The globalists are simply telling us that Trump is the biggest threat to their absolute rule that has come along in my lifetime of many decades. He must be destroyed on every front.

The 2nd amendment and elections are their only roadblocks. Listen to them.

The ‘rats have a problem. They’ve spent decades dumbing down Americans, mainly through the public education gulags and the media, that the public neither understands nor care about this. That means they’re not going to get the Big Mac masses to care one way or the other.

How can we *possibly* allow this man on the Supreme Court after he had his Jeep stolen? The obvious bias this man will have toward thieves will cloud his judgement and prevent him from ruling according to the law!!

(Look, they’re going to give this as a reason eventually. Just thought I’d get it out there first.)

A stolen Jeep (demonstrating Kavanaugh’s incompetence at safeguarding his personal property); the accumulation of credit card debt (demonstrating Kavanaugh’s spendthrift habits); frequently attending baseball games with friends (indicating an unhealthy obsession with leisure activities); a failure to achieve an ultra-high net worth (indicating a lack of professional ambition); volunteering to serve meals at a homeless shelter (indicating excessive amounts of free personal time) — the Dumb-o-crats and their media lackey-allies have dug up some serious dirt on this guy.

If Sotomayor presents herself as a self-styled “wise Latina,” I assume that the Dumbs will cast Kavanaugh as the “dull Irishman.”

Can’t find any dirt? Pikers. Real pros would make some up. Team Hillary couldn’t find much on Candidate Trump, so they paid some international spy types to make some up . . . et voilà! And we have the Steele dossier. It’s magic . . . all it takes is money and flexible ethics. The Times shouldn’t have a short supply of either. Well, maybe the money—they could try GoFundMe; maybe those pesky Russians will contribute.

What a great description of liberal behavior!

I have long used flexible or fluid ethics to describe public relations people, that is a profession with lots of affirmative hires. In fact, while Zimmerman was being smeared I made a point of tracking those associated with PR companies, very often they were using employer time and other resources to do their dirty deeds. In some cases I documented and sent that information to management, and as far as I could tell, none of the companies fired those misusing company resources.

come on- the press totally did this for Sotomayer too.

I’m somewhat surprised that the Dumb-o-crats haven’t asked Kavanaugh and his wife to submit stool samples to the Senate Judiciary Committee. They might be able to divine some nefarious, disqualifying traits pertaining to the dietary habits of the prospective Justice. Something along the lines of, a dram of Scotch consumed as a nightcap, or, copious consumption of red meat. Similarly, Mrs. Kavanaugh’s potentially high cholesterol and blood sugar level could demonstrate her unfitness as a parent.

I guess the Mexican-subsidized newspaper of record is fishing for domestic violence or drug overdose calls.

I was surprised by the press not demanding the name of the one juror who wouldn’t go with all counts on Manafort. Imagine the hell unleashed if they could get the name? Since another trial is still on, maybe they will be successful and “nudge” jurors to vote correctly.

A side note…. a judge ruled that Cook County’s 5 cent a round tax on ammo and $25 tax on each gun is constitutional since as long as one can possess some form of firearm and any ammo (see Barney Fife) then its OK. Once again, a reason for a Constitutionally oriented SCOTUS.

NYT is a an outlet for Mexican special interests.

The press is literally turning over every rock to find dirt on Kavanaugh. If only the press had made even a small percentage of the effort to find out the truth about Obama and his minions.

Looks like yellowsnake/zachriel made a drive-by between 4:38 and 4:43 pm EDT

Or, perhaps Rags is behind all those handles?

The media was looking for a domestic violence call and they only found a stolen jeep. They’re really lost their damned minds.

Well, at least they are fair about it, I remember when the media did that same with Obama’s appointees, don’t you? Oh, wait, they didn’t. At what point do normal, clear headed people (which seems to exclude most liberals these days) look at this and see it for what it is?

I think many people are catching on that the whole investigation set up through the rat Rosenstein and Comey is nothing more than looking to overturn an election. I think they are also catching on that there is a massive difference in how justice is being carried out when you have a D next to your name, where you are exonerated before the investigation starts, and when you have an R next to your name, where you are guilty and they will find something to prove it.

The left is going nuts because they had stacked the justice departments with full blown leftist activist judges and workers, and now Trump is overturning that trend big time. When you look at the left, and see they have a problem with a judge who rules by the Constitution rather than by emotions and other countries laws, how is it that they continue to get support as large as they do? I know education has been lacking in teaching the Constitution, while changing education to be pushing white guilt, pushing sexuality, no matter how deviant from the norm is fine, and pushing socialism as a viable and preferable economic system over the evil capitalist system.

You know the left will sink deeper and deeper into the depths to get power. It’s almost amazing that we get any real news anymore these days. Not that we get a lot, as we have to sort through all the editorial stuff, and opinions dressed up as news covered with hatred.

We are in big trouble in this country.

Our mainstream media has descended into Pravda all on their own. And they have the gall to say that they are somehow the gatekeepers of our democracy. Our Democracy (Constitutional Republic) is dying, one disingenuous news article at a time.