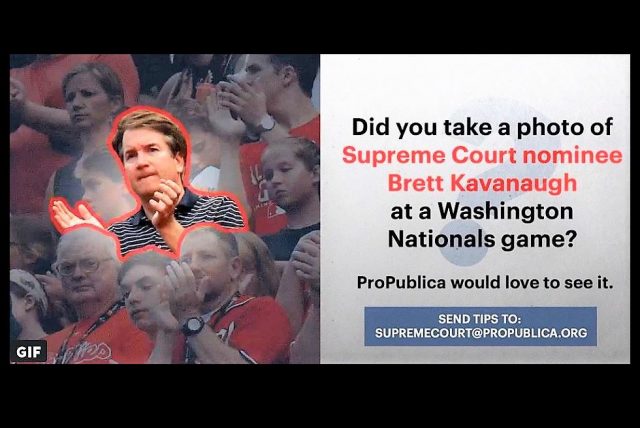 Unfortunately for the press, there’s not enough dirt on Supreme Court nominee Judge Brett Kavanaugh, which means journalists have to scrape at the bottom of the barrel.

That’s where we enter the creepy level and ProPublica has embraced it because the publication wants to know exactly who went to Washington Nationals baseball games with the judge and pictures of him at the games. Yes, the publication is still probing this disturbing development from July even though Kavanaugh bought those tickets with his personal credit card and his friends paid him back.

In July, the left went wild because The Washington Post reported that Kavanaugh “incurred tens of thousands of dollars of credit card debt buying baseball tickets over the past decade and at times reported liabilities that could have exceeded his cash accounts and investment assets.”

Anyone with a reasonable head on their shoulders rolled their eyes because how many of us have taken out loans on houses, cars, or other expenses because we couldn’t pay the amount up front? So the problem with Kavanaugh is that he’s not rich enough to pay for everything out of pocket?

ProPublica found a problem with Kavanaugh spending so much on baseball season tickets even though he paid for the tickets with his credit card and his friends paid him back.

Did you attend a Washington Nationals game in 2017?

You might be able to help us. Really. https://t.co/LAhGBWiI6u pic.twitter.com/Y2Xhkx6ir0

But I guess public officials aren’t suppose to have a life outside of their work:

Kavanaugh is up for one of the most powerful positions in the land. A lifelong position.

We think it’s important to figure out as much as we can about a nominee’s background before he is confirmed. So we’re turning to you.

Figuring out who Kavanaugh brought to games could be relevant to his confirmation. It would help:

We’re not sure what we’ll find. But we do know that people take a lot of pictures at baseball games. Did you see Judge Kavanaugh at a game? Did you attend a game with him? Do you have any photos, and if so, will you send them our way?

The publication listed the horrific details they already know, like the fact that two photographs exist of him wearing blue striped polo shirts at games! THE. NERVE. How dare he wear blue instead of red!

The authors ask people to email information about “where he sat, how many seats he bought and which friends attended games with him.”

It gets creepier because the article even has a questionnaire for you to fill out: 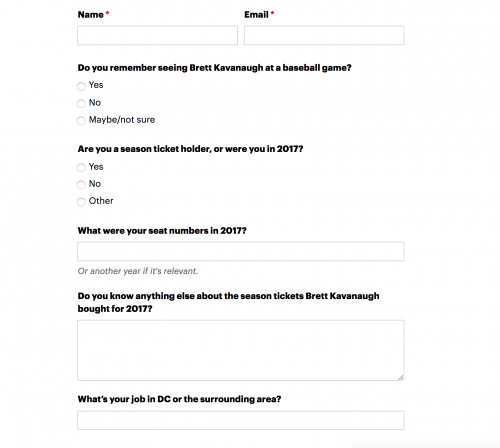 Something tells me, probably the good old common sense inside me, that any evidence ProPublica receives will show that Kavanaugh just loves baseball like any good American!

You know what you should do, ProPublica? Talk about Kavanaugh’s position on the 4th Amendment, not his love of baseball. You say your concerns come from the fact that he’s going to be on the country’s top court in a lifelong position so why not concentrate on his views on the Constitution. You know, his ACTUAL future job.

Hey @ProPublica! We spotted Judge Kavanaugh with Tom, Abe, Ted, and George! What do we win? #PresidentsRace #Natitude pic.twitter.com/8YzGkKCUpp

“I’ll just put it on my card for now to grab them, just pay me back later.”

He goes to baseball games? BASTARD! He doesn’t deserve to be on the Supreme Court!

You guys are, uh… Kinda creepy.

He buys tickets for friends? What an evil monster, obviously the devil.

There is no bottom.

This ^^^ is the leftists’ motto, now and forever.

There really isn’t. The New Hate Times was digging for dirt on the good judge’s wife. Even their own readers disapproved.

So I guess Strzok isn’t sorry or….

I have been fired for expressing my personal opinion in private texts about a dictator that history will soon deem not only a Russian asset but an unhinged madman threatening the sovereignty of the United States of America.
——————-
Hmmm, @NOT peter strzok……nice going cillizza….

Stalking judges? That’s what gangsters do. Is that where we’re going? Maybe it’s time to start stalking RBG. A woman of her age could break a hip or something if she accidentally fell.

Baseball must be banned… it is (was) the American pastime and we all know America is a racist white patriarchal slave owing leech that has caused irreparable damage to cultures worldwide. (Did I get that right? Hard to remember all the points brought up in re-education camp).

Do I get extra points for quoting dead white men like Marx and Lenin if I am inclusive with Fidel, Che, Robert Gabriel Mugabe, Chairman Mao and Pol Pot?

Hate to tell you this, Bob, but Fidel and Che are also dead white men. And they both despised blacks and mezzitos.

The Marxist left never lets such trivial ‘facts’ get in the way of its hatefest.

The ‘non-partisan’ ProPublica: “Democracy dies in the billing cycle.”

Remember that ProPublica was one of the recipients of IRS confidential tax information about various Tea Party chapters, IIRC. To their credit, they admitted it and immediately exposed it.

I took that to mean they were somewhat honest. My mistake.

I wonder if George Will has an anti-Kavanagh column coming out. Anyone have pictures of Will at National’s games?

Just put it bluntly – No principles, nothing but HATE !

Hmmmm…..how many pictures did the media seek for Sotomayor and her “friends” at Hispanic events. I mean they didnt’ even care that she said officially that a wise Latina is better that an old white male. SHe MUST have some skeletons in her closet?

If this is their A game (sorry for the pun) they are in deep trouble.

The left hangs out with terrorists in their spare time, so they imagine we do the same. They’re going to be disappointed.

This comment inspires me. I wish I could photoshop well, I would photoshop a picture of Kavanaugh sitting next to Augusto Pinochet, and they would both be wearing blue polos.

They’re looking for that one game where he wore a swastika. Totally legit.

Is he wearing an earphone. He may be using the baseball as an excuse to communicate by shortwave radio.

If he is super sneaky he will use long wave radio. Then he can communicate with underwater submarines.

Stirring something at a baseball game?

ProPublica demonstrates a distinct lack of awareness of what was recent news.

I don’t get it. Seems like an awful lot of work for a load of nothing much. Why don’t they just make something up, like they usually do? Pay some ageing floozy to say she and Brett played Doctor behind the woodshed when he was eighteen and she was twelve. There doesn’t have to be any plausibility to it; there doesn’t even have to be a woodshed. The whole scheme is cheap, easy, and reliable, since they know for a dead cert the press will hammer it 24/7. The Senate won’t believe it, but half of them are looking for excuses to vote against him, not real reasons.

They are working on it.

Their old game no longer works. Trump took their game plan and ripped it to shreds.

I can’t wait for the replacement of one of the communists on the court. What do you think they’ll do then?

When I am not in court, I usually wear a polo shirt (along with my other clothing). And today’s polo shirt happens to be blue striped. Good thing I don’t have plans to go to the ball game today.

I swear I saw Kavanaugh’s face on the ceiling of the Sistine Chapel.

Don’t we have laws against the harassment of judges? Jeff Sessions,where are you?

Really? I seem to recall some scholarly lecture against threatening Grand Inquisitor Meuller if he strayed outside the Rule of Law.

Must have been one of my alternate timelines.

I saw Judge Kavanaugh at the urinal at the Nationals game. I should have photographed him and sent it to Pro Publica. Who would want a judge who partakes in such filthy acts.

“We think it’s important to figure out as much as we can about a nominee’s background before he is confirmed.”

Funny, but a quick search for “propublica” and “obama” and any of the things that 0bama hid about himself (or others did) turns up… pretty much diddly.
So I call baloney on the claimed motivation.

Guys… go to the link and type in outlandish things. If nothing else, you’ll get a chuckle out of it. On a more positive note, it will waste ProPublica’s time and money.

For instance, I wrote that he attended a game with the Koch brothers were he promised to overrule gay marriage if they bought him a hot dog.

I wonder at the percent of the opposition knowing how absurd this is.