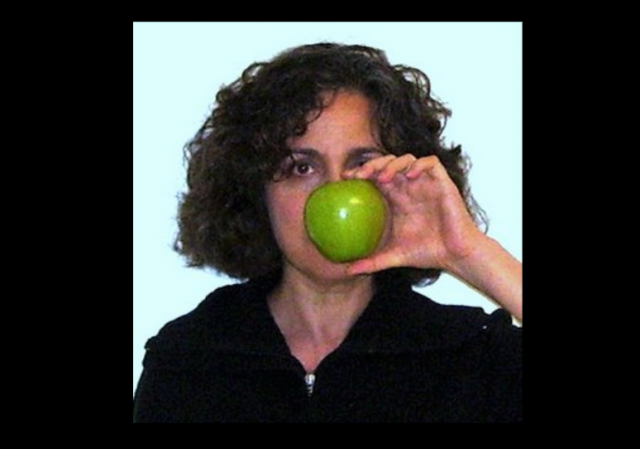 On July 19, 2013, Neo-Neocon posted for the first time at Legal Insurrection, Obama’s identification with Trayvon Martin. Over 200 posts later, here we are at her 5th Anniversary.

I’m not sure how we connected, probably as a result of her involvement as a Tea Party blogger at her own website, Neo-Neocon.

You can check out her old blogspot blog here.

Back in the day, there was a vibrant Tea Party and conservative independent blogosphere, and Neo was part of it, carefully avoiding a full face view of her during public appearances so the IRS wouldn’t get her. 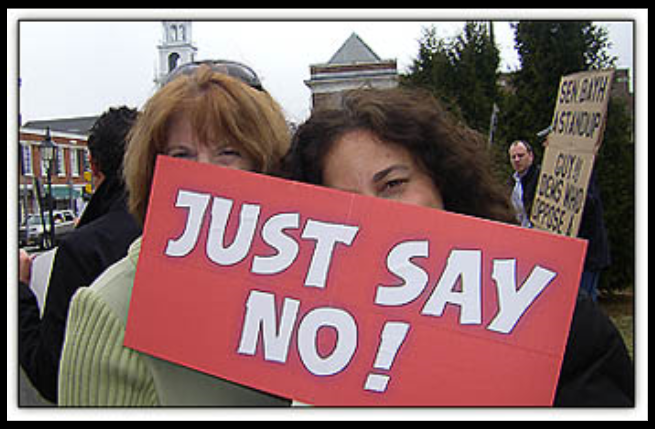 The photo with her face covered partially by the green apple has become her trademark (figuratively, not literally). She notes:

Why the apple? See this. 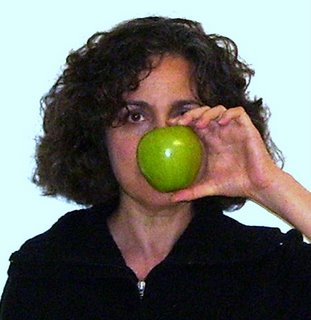 She takes the obscuring of her face with the green apple seriously, as in this 2006 photo: 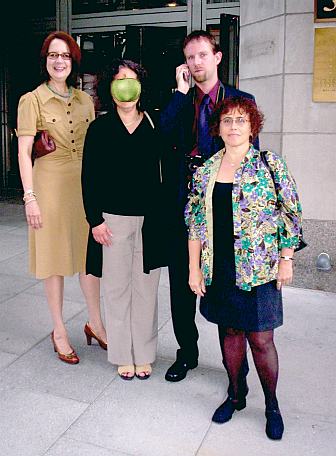 She once went black, but did go back (to green): 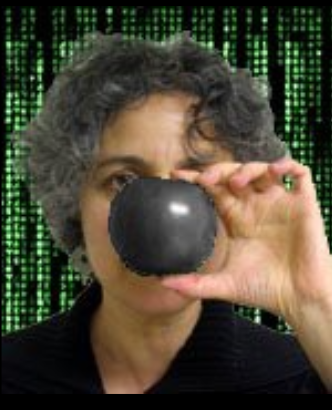 Which raises the age-old question.

Is she real, or just a figment of our imagination?

But doubt not. I’ve met her.

And she has a name. Jean Kaufman, which she has used publicly before, so I’m not giving away any secrets. She provided this description of her background:

“Neo-neocon” is the blogger Jean Kaufman, who started out by blogging anonymously but began writing under her own name years ago as well. Jean’s specialty is the phenomenon of individual political change, especially of the left-to-right variety, and the personal and social aspects of being a conservative in a crowd of liberals . She has degrees in law and family therapy, but also writes about the arts (particularly dance) and whatever else happens to catch her interest, which can be just about anything on earth.. Jean was born in New York City, but has lived in various parts of New England for most of her adult life.

Since that first post 5 years ago, Jean has become our “thoughtful” and “pondering” writer, focused not on breaking news, but on putting news in context. She tackles issues others shy away from, such as:

Years ago, when I’d been blogging only sporadically for just a few months, I decided to make a bargain with myself. I would post something every day—or almost every day–for an entire month, and see whether I could sustain the practice and get any readers. A month of writing every day seemed like a very long time to me back then. But I’ve been blogging now at my own site for (gulp!) nearly fourteen years,, and it’s been my great pleasure and privilege to branch out and become part of the quality forum at Legal Insurrection for the past five years.

Five extremely eventful and fascinating years, I might add. I thank Professor Jacobson and all my fellow authors, contributors, and editors, and of course all of the readers and commenters here at Legal Insurrection.

Why is she thanking the commenters? Suddenly I question her judgment.

But anyway, here’s to the next 5. Thanks, Jean.

Thank you, Neo, for your consistently fine contributions!

Okay, Professor, admittedly I have thin skin: “Why is she thanking the commenters? Suddenly I question her judgment.”

Is this like a double negative where the neo neo cancel each other out? I’ve often wondered without asking.

“Is this like a double negative where the neo neo cancel each other out? “

I would not take it that way. I would take it to be more neo (new), thus it is a more newer version of Neocon. If you look at it as additive, then it is more neoconservative than the previous version.

When I grow up I want to write for L.I.

In a world of ‘mohammed mohammed,’ ‘pizza pizza, and ‘billy bob,’ Neo-NeoCon is a welcomed upgrade.

Congratulations on your 5 year pin.

Thanks for the insightful articles, Neo!

And a hat tip for the Seinfeld reference, Professor. That episode came up in conversation just this morning.

I’m betting that she’s a smoke-show!!!

Congratulations on your anniversary, Neo. I always enjoy your posts.

And apologies for just assuming you were male. My bad.

Except for her pernicious NeverTrumpism, which is why I stopped going to her blog 2 years ago.

I thought that she handed that well, even artfully, when you made similar comment on the “Gotcha” post yesterday.*

I found the linked item from her blog informative and strangely close to my travels through the 2016 election season. Thanks NN-C.

*I would link back to that, but such cyber gymnastics are beyond my abilities.

I tried reasoning with her back in 2016 but she was blindly pro-Cruz and anti-Trump, and she thought it just oh so awful the way Trump dispatched and disposed of Cruz and all the other Republican primary opponents, never understanding or even wanting to understand why Trump was the right man at the right time. I gave up. Whenever I read her now I still detect a little anti-Trump snarkiness lingering.

Trump was a political neophyte, which required assessing his character and skill in isolation. Her opinion of him changed as he proved his mettle. Today, she seems cautiously optimistic about the political leader, if not necessarily the man.

I was a regular reader and commenter. I contributed $25 to $50 most years. Because I was an early and enthusiastic Trump supporter, she blocked me after I called her out for her never-Trumpism. Since I’d just contributed to her, I asked for my money back. She kept that.

“Why is she thanking the commenters? Suddenly I question her judgment.”

You can’t question her graciousness and class, however!

ISTR her poasting at FGL, back before someone went full retard there.

Many thanks for all those columns right back to the beginning. Would that MSM columnists had a quarter of the insight and articulation of Neo-Neocon, it would be a huge improvement.

I love your Seinfeldian play on words!!!

Oh, and YES, she is spectacular!

Thanks, everyone! I’m touched! And thanks so much, Professor Jacobson.

More verbiage about the occasion here.

I tho8gh of your son. Maybe he would have not liked me to. I was confronted with killing a mouse.

After I put a glove on I put it outside. I just couldn’t crush it.

I hate the slang.
What is a Neocon?
It means nothing to me. Or Dan Webster.

I knew it all along. Neo was just a figment of my imagination.

The happiest of anniversaries to you, Jean! A pleasure to work with you.

I’m sorry. That was cheap of me.

I asked once… no answer.
Just what is a NeoCon?
Thanks,
Mark