The GOP has a one-seat majority in the Senate, which would make one think the Democrats have a real shot at claiming the majority in the upcoming midterm elections. But, the latest poll from Axios/SurveyMonkey shows a Senate Democrat majority is not likely. 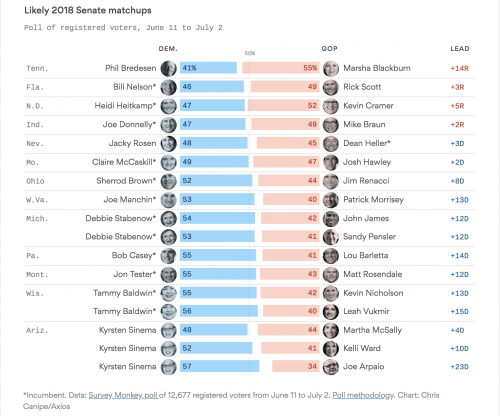 Republicans could flip the seats belonging to Sens. Heidi Heitkamp (ND), Joe Donnelly (IN), and Bill Nelson (FL) as their opponents have slim leads. On June 25, I wrote that a CBS News poll showed Republican Governor Rick Scott with a slim lead over Nelson. In fact, only one poll has Nelson with a lead over Scott.

Scott has name recognition on his side, but he is also doing more to reach out to the large Hispanic community in Florida. Scott is running ads in Spanish and his campaign website has a Spanish-language page. He has also started learning the language and accepted interviews with the Spanish-language media.

Up in Indiana, Donnelly has received some mixed news in the latest polls. A poll from Morning Consult found that 41% of people in Indiana approve of him while 34% disapprove. That same poll found 44% people think “it’s time for someone new” and only 31% believes he deserves re-election. Roll Call reported on June 8 that a Republican poll conducted by WPAi for GOP Rep. Jim Banks had Donnelly up 50% to 42% over his opponent former state Rep. Mike Braun.

Heitkamp isn’t as conservative as a few other Democrat Senators, but she has always been vulnerable because of North Dakota’s conservative leanings. She won in 2012 over her GOP opponent “by less than 1 percentage point” and that victory “has been the Democrats’ only statewide victory in the Peace Garden State in the last eight years.”

The incumbent hasn’t shied away from the political leanings of her state. In an ad released last month, Heitkamp explained why she has “voted over half the time with President Trump.” She said:

“When I ran for the Senate six years ago, I said I wouldn’t vote the party line, because I don’t think either party has all the answers,” she says in the new ad. “That’s why I voted over half the time with President Trump. And that made a lot of people in Washington mad, but when I agree with him, I vote with him.”

Democrats have an opportunity win seats Nevada and Arizona.

Sen. Jeff Flake (R-AZ) announced his retirement last year. Democrat nominee Krysten Sinema has a huge lead on two possible GOP nominees: Kelli Ward and Joe Arpaio. She only has a four-point lead over Rep. Martha McSally (R-AZ). So maybe the numbers will change after Arizona’s Republican primary on August 28.

In Nevada, Democrat nominee Jacky Rosen has a three-point lead over incumbent Republican Dean Heller. While most view this race as a toss-up, RealClearPolitics observed that Nevada’s Democrat tendencies have slowed down, “but it still leans a touch to the left.” This incredibly small margin means Nevada can switch to Democrat in a heartbeat.

The Democrats have made this race a priority and poured money into it from the start, mainly because Hillary won the state in 2016. Heller is the only GOP incumbent in a Hillary state. From the Las Vegas Review Journal:

Heller’s campaign announced on Tuesday that it had raised $2.38 million during the second quarter of 2018 — April 1 to June 30 — more than double what Nevada’s senior senator raised in the year’s first quarter.

But Heller’s haul trailed that of his Democratic rival, and by a good margin.

The Rosen campaign announced Monday that it had hauled in $3.5 million during the second quarter — about $1.3 million more than she raised in the first three months of the year.

That has been the trend dating back a full calendar year in the race that is viewed as one of the key contests in determining which party controls the U.S. Senate after the November elections.

Since announcing her candidacy in July 2017, Rosen has outraised Heller $8.3 million to $5.3 million.

The Cook Political Report: Nevada and Arizona are Toss-Ups.

A lot of experts considered Sen. Joe Manchin (D-WV) and Sen. Jon Tester (D-MT) very vulnerable this midterm. The previous Axios poll had them losing to a generic GOP candidate, but now they’re ahead by double digits.

Manchin is probably the most conservative Democrat in the Senate. President Donald Trump destroyed Hillary in West Virginia by 50 points and its governorship switched from blue to red in 2016, which makes me think the state could vote for the Republican candidate over Manchin.

Another 4% back ex-con coal baron Don Blankenship, who lost the GOP primary in May and is now trying to run as the Constitution Party candidate. His bid is in question, however, because of West Virginia’s “sore loser” law.

Manchin’s lead comes even as the President remains widely popular in West Virginia, with 67% of voters in the state approving of his job performance compared with 29% who disapprove.

Montana is just as interesting because of the electoral swings within the state. Trump won by twenty points in November 2016, but the state also elected a Democrat governor in 2016.

Trump has made Democrat candidate Tester a target, including a recent rally where he encouraged voters “to retire liberal Democrat Jon Tester.” Trump blamed Tester for taking out White House doctor Ronny Jackson.

Tester may have helped himself by concentrating on his opponent and not the president. After the rally, Tester’s spokesman released this statement that only mentioned his Republican opponent Matt Rosendale:

“Jon’s record is clear — if it’s good for Montana, Jon works with anyone from either party to get things done. If it’s bad for Montana, he’ll stand up to anyone,” Tester spokesman Chris Meagher said. “East Coast developer Matt Rosendale is only looking out for himself and whatever out-of-state special interest group that is propping up his campaign with cash. We can’t trust him to defend Montana.”

Tester published a full-page ad before the rally to remind voters that the president has signed 16 of his bills:

“I’m glad that the president has signed 16 of my bills,” Tester said, pointing to one measure designed to improve accountability at the VA. “We need to continue to build on those successes. President Trump, I’ll clear my schedule for whenever you are ready to sit down and talk about how we can get to work for Big Sky Country.”

The Cook Political Report: Montana as Likely Democrat and West Virginia as a Toss-Up.

If you were approached by a stranger and asked if you support a republican would you be truthful, given all that is happening.

For this reason alone polls are worthless.

Given the source of the poll (AXIOS), my money is on the republicans to pick up a net total of five seats.

The dems have destroyed whatever credibility they had. Except for hating everything Americans hold dear, they have no platform.

This is ridiculous for Mary Chastain to think polls done IN JULY are predictive to November elections.

Just declaring Joe Manchin safe in July is beyond foolish.

Hey Mary, there is this thing called CAMPAIGNS and they don’t start running yet and the swing voters don’t start paying attention till MAYBE Labor Day if not in a midterm about two weeks before.

Seriously this is just the stupidest thing I have ever seen.
How many Campaigns have you been through Mary? You seriously don’t know the Democrat advantage that is even in accurate polls in JULY!

BTW Mary where was Trump in the polls in Wisconsin in July? How about Michigan? How about Pennsylvania? Try looking at the where Republicans polled in July of 2010 or July of 2014? They were about this good in those LANDSLIDE years.

You really have to be quit a fool to try and predict a Republican victory in July when the only voice out there is the Mainstream Media which favors who MARY?

She’s just reporting on the state of the race as it currently sits. I believe it is going to change.

The alternative is to make it up or not report.

I choose “Not Report” as it is more honest because just like the polls that had Hillary winning in a landslide, most pollsters are lefties and just can’t bear the thought that sane voters would NOT vote for these laugable Useful Idiots peeing themselves vying and lying to us to regain power. NOT GOING TO HAPPEN.

Even if we don’t trust a poll, if the methodology is consistent it can still be a useful barometer.

For instance, Clinton was up by 13 now that lead has shrunk to +5. What’s going on? Forget for a moment that the entire poll is off 10 points. Why the change?

I find your observations very insightful: an analogy
would be, you have a thermometer, not sure how
accurate it is, but it is very useful to see if the
water is getting warmer,or cooler.How it responds to
change is useful.

As a general rule, polls are a tool used by the Left to pretend everyone favors Democrats. Don’t believe me though. Just ask President Hillary Clinton, with her 99% guarantee to win the 2016 election.

When we look at the current situation in the country, running a poll on the Nov elections is almost a fool’s errand. The animosity and anger make polls almost meaningless except maybe to a campaign for their ad buying etc. Think of the things that would affect the current mood. NK gives in. China agrees to fair trade. The wall gets funded. Jobs and wages continue to grow. Mueller finds no collusion. All of these things would be a big boost to Trump and the R’s.

Only if one were COMPLETELY unfamiliar with the seats in play this year.

The history of polls and the pollsters that construct them and carry them out is legend, e.g., the defeat of Harry Truman by Dewey. The most recent example being the “Landslide” that was predicted to be merely a fait accompli and “Cornation” of Hillary Clinton and her “Right of Passage” for being a good liberal soldier for having endured Wet Willie and The Black Plague President who came ouf of the blue to sink her in 2008.