“I think we need to abolish ICE. That seems really clear.” 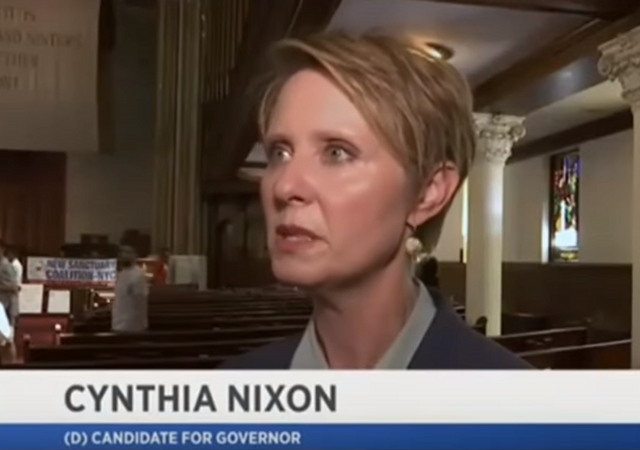 Progressive New York governor candidate Cynthia Nixon is getting walloped in the polls by establishment candidate Andrew Cuomo. She needs to energize far left base voters and she thinks she’s found a way.

She jumped on the border issue and called ICE a terrorist organization.

Nixon made her remarks at a church on Manhattan’s Upper West Side, where an illegal immigrant is taking sanctuary after being threatened with deportation after she failed to show a driver’s license during a traffic stop by ICE agents.

“ICE has strayed so far away from its mission. It is supposed to be here to keep Americans safe but what it has turned into, frankly, is a terrorist organization of its own that is terrorizing people who are coming to this country,” she said, according to NY1 News.

The candidate’s campaign against ICE follows an earlier appearance the same day on ABC’s “The View,” where she called for the abolition of the immigration agency.

“I think we need to abolish ICE. That seems really clear.

If only someone in the room had said: Now do Antifa.

This is going to become a thing for progressive candidates now. A ‘dog whistle’ if you will:

Lefty insurgents are starting to use “Abolish ICE!” to differentiate themselves in primaries. At least four examples in NY this week, including Cynthia Nixon. via @aseitzwald https://t.co/866kE6zATL

Some people have a different view of this issue. Take a look at this exchange from Twitchy:

ICE is a terrorist organization, and its egomaniacal leader is Donald Trump. Sign our petition to #AbolishICE: https://t.co/sZ3VF6lRhE https://t.co/qsB6XiJUJc

With all due respect, Immigration & Customs Enforcement was formed after 9/11. They’re mothers, fathers, sons & daughters. Yes, child separation needs to end – these individuals, however, deserve an apology. https://t.co/CiJtYshKre

What none of these fools get is that all Trump has to do to ruin all of them is to go after MS-13 child trafficking. Recently 48 Dem Senators voted for open borders. Heh.

I expect to see it near the end of October.

I expect Trump will get his wall plus anything else he wants re:immigration in the lame duck session.

yeah cause visa frauds/overstays never did any harm to NYC…..

Because Nixon and other high-level Democrats don’t encounter on a personal level the harm done by these illegals, they don’t believe it exists. They dismiss those concerns, voiced by so many such as deaths by car fatalities or murders by illegals, as quickly as they dismiss fly-over country generally. Their insulation from the disastrous and dangerous conditions which Democrat/Socialist/lets-not-foster-personal-responsibility ideas have brought to this country form their “analysis.”

Now, as I recall, the 9/11 attacks were not made by those notorious terrorists at ICE, but by alien types who weren’t supposed to be in the country at all. You know, real terrorists, not pretend terrorists.

I don’t recall all the particulars of who was who, but I imagine a few New Yorkers still do.

Nixon’s problem isn’t that she’s a scum-sucking socialist and an enemy of America, it’s that she has shit for brains.

Of course even a shit-for-brains state governor would have some difficulty doing away with a Federal agency. I suppose the state could start a civil war … set up recruiting stations in Starbucks, maybe.

I know people who don’t live in downstate New York who fell just like so many outside of LA and SFO in California. I really feel sorry for them that the NYC area dominates state politics, especially governors. And their choices will be two essentially empty vessels.

Also, immigration that is not excessive, that does not exceed the rate of assimilation and integration before Planned Parenthood.

As in a sustained nuclear reaction we have reached critical mass of Progressive action. i have to remind myself that the Progressive movement has had a century to refine their message. The Left has had about 80 years of learning at the feet of their Moscow masters the art of agitprop. When the Dems faced Reagan election, Teddy Kennedy turned to his best option, direct negotiation with the Soviets to throw the election.

The US government is now considered illegitimate with the same laws as under Bus/Clinton/Bush/Obama. The Left is tearing at the seams of this country pushing for one party rule. That that system fails and leads to dictatorship is of no concern IF it is their dictatorship. Somewhere there may be an “insurance policy” to back up the Progs … blue hats and all…fiction? I hope…

I would hate to think where we might be if Billy Bob hadn’t jumped the gun with the AWB. He just wanted to get socialist rule under his watch so badly that he ended up screwing the pooch by waking up the silent masses. Those 10 million ARs in non .gov hands are going to make it much much harder. Some dems still see Klinton as the greatest gun control president ever, totally oblivious to him causing a buying spree only second to Obummer and also creating the grassroots effort to get shall-issue CHL passed in about half of the states. Those were unintended consequences that I can live with.

I wish these progs would explain to the rest of us exactly how we’re going to pay for all the “immigrants” they want to allow into our country.

More than 50% of our current “immigrant” population, both the legal and illegal variety, are receiving some form of welfare. Estimates are that each of the illegal alien kids that the progs are so desperate to let in cost U.S. taxpayers an average of $40,000 a year in services and benefits.

Remember all the squawking from the left recently when Trump limited the deductibility of state and local taxes to $10,000? The lefties immediately started concocting all sorts of scams to get around the limit, setting up multiple property trusts, characterizing their property tax payments as “charitable” deductions, etc. All so that they would not have to pay more federal taxes.

But at the same time, they’re demanding that we allow unlimited millions of “immigrants” into the U.S., even though the ones already here are currently costing U.S. taxpayers hundreds of billions of dollars a year.

So who’s going to pay for all the poor newcomers that the left demands we allow in? We know the left doesn’t want to pay more taxes, so how do they think this is going to work? Come on, Cynthia, let’s have that discussion. Let’s talk about the numbers, and the costs, instead of just the usual virtue-signalling blather. If you want to be taken seriously as a leader, then start acting like one.

On another front, what about the fact that each immigrant’s carbon footprint goes up 5 to 20 fold when they arrive here. The guy who rode a bike back in shithola is now driving an oil smoking dodge minivan. I guess their answer to this, big surprise, is that we all need to consume way less so that the others can consume way more. The Hollywood eco-mentalists will do their part by moving from a 20,000 sq ft place to a 19,000 sq ft place, and maybe getting a slightly smaller Gulfstream.

If ICE really did act like a terrorist organization they could shut down the illegals crossing tomorrow. By next week we’d have ten million fewer illegals and more would be streaming home every day.

But it’s just more hyperbole on the part of an unhinged, democrat pervert. It’s like they have a ‘unhinged pervert’ policy to get into the upper levels of the party these days.

The poor Wench has the misfortune of having the Surname of Nixon.

Absent that her idiotic ideas would make her a Player in Dem Politics!

Only worst case would have been if her parents (I assume she had “parents”) would have named her, him or it Nathan Bedford.

Yeah. The “great” Richard Nixon inflicted on the Nation one of the greatest disasters in quite some time.

“Look, we understood we couldn’t make it illegal to be young or poor or black in the United States, but we could criminalize their common pleasure. We understood that drugs were not the health problem we were making them out to be, but it was such a perfect issue…that we couldn’t resist it.” – John Ehrlichman, White House counsel to President Nixon on the rationale of the War on Drugs.

Who does this loon think is going to pay for all the free shit for the never ending flood of people who will come here if her insanity becomes policy?

She is truly a fucking moron.