Democrats need to win twice as many House seats in order to qualify for an actual wave.

The Democrats are desperate to crash the House and Senate in November, taunting the right that a blue wave is coming their way. Do they even know what is considered a wave in elections?

I guess not because analysis from Ballotpedia shows the Democrats that it’s not just taking over the House and Senate. In order for an actual wave to happen, the Democrats have to win a lot more seats than they need to control Congress.

Ballotpedia examined “results of the 50 election cycles that occurred between 1918 and 2016. The evidence resulted in the researchers concluding that these wave elections are “the 20 percent of elections in that period resulting in the greatest seat swings against the president’s party.” 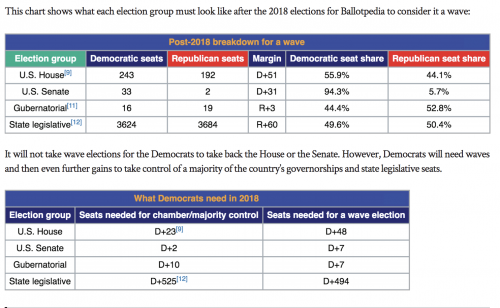 Robert Oldham, a staff writer on Ballotpedia’s Marquee Team and one of the report’s authors, told the Washington Free Beacon there is a reason why wave elections are not a frequent occurrence in American politics.

“We were working from the idea that if waves can be defined, and that’s a big if, they should be significant and relatively rare historical events,” Oldham said. “We looked at the last 100 years of election data and found that 1 in 5 elections [can be deemed] waves.”

In the 50 elections Ballotpedia looked at, a wave only occurred only 11 times. Under Republican President Herbert Hoover in 1930, the GOP lost 97 seats. The Democrats lost 48 seats in 1966 under Democrat President President Lyndon Johnson. The GOP flipped 63 seats in 2010 in President Barack Obama’s first term. 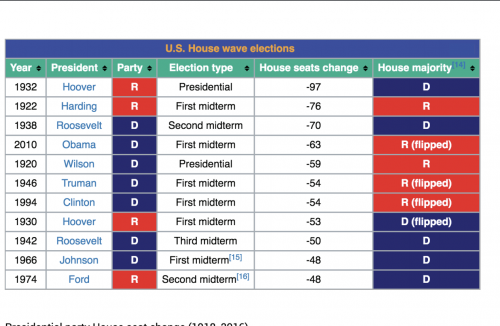 The Democrats need seven Senate seats for their wave. Ballotpedia found that a “president’s party lost seven or more U.S. Senate seats in 10 of the 48 Senate elections since 1918.” 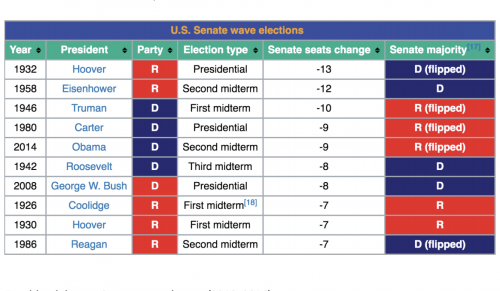 Now if the Democrats want a blue wave then November is the time to do it because the majority of the actual waves that happened took place in a president’s first term:

Can the Democrats at Least Make a Dent?

The Washington Free Beacon said the midterms on paper “seem to favor the Democratic Party,” especially since 60 GOP House members have announced their retirement. These moves mean the GOP needs “to defend 50 open seats this cycle, compared to 20 for the Democrats.”

The map on The Cook Political Report looks like the GOP shouldn’t have too much of a problem defending the House: 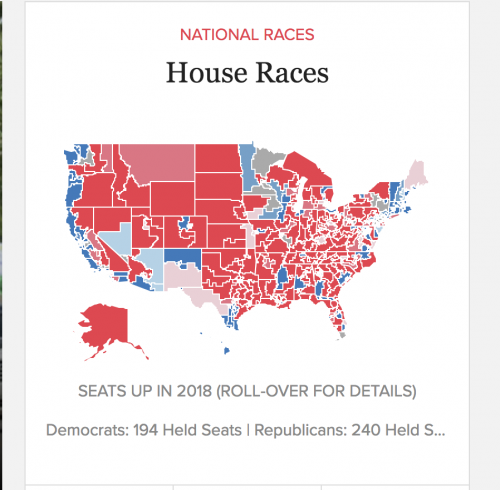 Via The Cook Political Report

The Cook Political Report published its House At-A-Glance report on June 27. A few I found interesting:

Rep. Martha McSally (R) in Arizona’s 2nd District is running for Senate and the report has her seat leaning Democrats.

Rep. Carlos Curbelo (R) in Florida’s 26th District is a toss up while the district of his colleague Rep. Ileana Ros-Lehtinen (R) leans Democrat.

Pennsylvania’s 5th, 6th, and 7th District has a GOP representative, but the report has the first two as likely Democrat and the other as lean Democrat.

2018 Elections, Democrats, US House, US Senate

Chapter 8: The 1932 Campaign — Roosevelt Is Elected President of the United States

Chapter 10: Roosevelt Seizes the Country’s Gold; the NRA and Fascism

Chapter 11: Making America Over and the Communist u201CIdealu201D

Chapter 12: Recognizing the USSR; the Affinity for Dictatorship; the CCC

If the Party of Satan were to merely win the House and Senate by a slim margin, that the outcome didn’t represent a “Blue Wave” would be cold comfort.

Lemmings are a kind of short tailed vole, a mouse-like rodent that favors tundra and open grasslands. Three kinds are found in Alaska, including the collared lemming, the only rodent that turns white in winter (seasonal white privilege).

I thought there was a rabbit that turned white during winter.

Will there be a blue ice age?

Six months from now, I sincerely hope to hear some Dem pol say:

“We lost fewer seats in the House and Senate than we expected, so we’re counting that as a win.”

That would be spectacular, and the leftists heads will explode, Maxine will be taken out by some means, maybe sex scandal where she groped an intern, Nancy will probably be forced to retire due to health reasons, Schumer will pretend it means nothing and that they have a mandate, well, because they are the true voice of America.

Please Conservative pundits quit pi$$ing yourselves about a Blue Wave because Democrats are wising for one while doing everything they can to pi$$ off the country.

This GD “rule” that the out of power party loses seats is because SANE!! Political parties lick their wounds after a loss and move to the center.

INSANE parties like the current Progressive Democrat party tell the country how f-d up they are for not voting for them and then get the same result they did on the last election or most typically WORSE!

The adjectives same and political never go together. Some periods might be less crazy. But politics and especially campaign rhetoric tends more to the nitty side. I remember serious hyperbole during the Reagan era for example. And the media’s treatment of the Tea Party was way over the top. Very little sanity.

Democrats no longer know where the center is.

The Dems have given the Pubs so much ammo for the upcoming election that it is almost absurd. They want to rescind the tax cuts. abolish ICE and have open borders, take away all guns, have Medicare for all, free college and abortions on demand at any time any place for all, free.
I say if the Pubs cannot win against that platform then they should lose!

I think Rs will be picking off “safe” D seats.