“If we’re going to win some of the places we can win, in redder parts of the country, it’s with people who may not be aligned on certain issues with some other Democrats.” 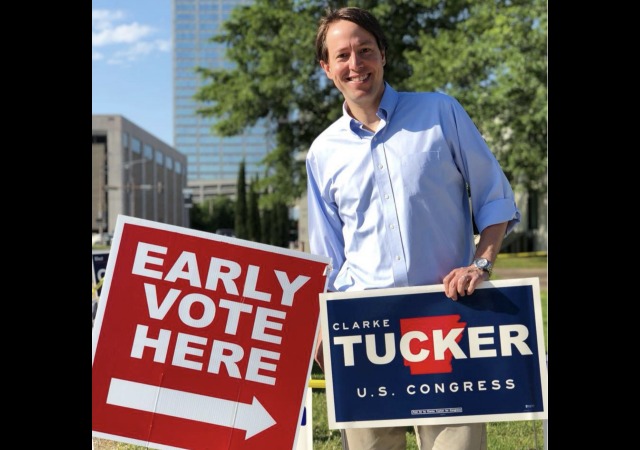 Aas these months leading up to the midterm elections have shown us, the Democrat Party has not recovered from Hillary Clinton’s loss in November 2016.

For people who shout FORWARD and CHANGE, the progressive wing of the Democrat Party shows no interest in moving FORWARD or in CHANGE. Everyone else must move forward and change though. They cannot accept the fact that the majority of Americans, even within the party, do not hold hard leftist views.

Democratic leaders, however, have absorbed this information and have begun to back more so-called “moderate” Democrats in an effort to flip the House and even the Senate to the annoyance of left-leaning progressive Democrats.

The New York Times published an article Sunday that detailed a few of these “moderate” Democrats. Look at Clarke Tucker who is running for the Democrat nomination for Arkansas’s 2nd District:

He supports the Affordable Care Act, but not a single-payer system. He signals misgivings about Nancy Pelosi as the next House speaker. And even when addressing an audience of Democratic Party regulars, he does not attack President Trump by name.

In short, he comes across as a moderate — and exactly the kind of candidate who leading Democrats believe the party should field in Republican-leaning districts to bolster the majority they hope to win in the House in November.

Tucker received backing and support from the Democratic Congressional Campaign Committee (DCCC), which means they want him to take on incumbent GOP Rep. French Hill.

Paul Spencer, one of Tucker’s opponents in the primary, has spoken out against Tucker’s views, asking the party if it’s “really worth the win to keep pushing back against the people you’re supposed to be serving.” He complained that the Democrat “party used to stand for something” and that “[A]t some point, you’ve got to stand up, and you’ve got to move the party in the right direction.”

There it is. Here is one candidate who refuses to budge because he thinks his way is the right way.

Newsflash, Spencer. You’re elected to Congress to represent people within your district, not just your views. The Cook Political Report rates Arkansas 2nd District as Likely Republicans. So Tucker will probably have a hard time flipping the seat. Someone like Spencer will have an even harder time making gains in Arkansas’ 2nd. Granted, a Democrat held the seat in 2010 and President Donald Trump barely won the district.

Representative Josh Gottheimer of New Jersey, a first-term Democrat who wrested his closely divided district from a hard-line Republican in 2016, said his party should strongly back moderate candidates who have the potential to compete in areas that often prove politically grim for Democrats. Mr. Gottheimer, who is backed by the conservative-leaning U.S. Chamber of Commerce, urged liberal Democrats to accept some ideological dissension in the party’s ranks in order to achieve a congressional majority.

“If we’re going to win some of the places we can win, in redder parts of the country, it’s with people who may not be aligned on certain issues with some other Democrats,” Mr. Gottheimer said.

Spencer insists “that a liberal platform would fare well among Arkansans if given the chance.” The party leaders, along with Democrats in the state, find that they all “must play a long game and not expect voters to swing all the way from Republicanism to a Bernie Sanders” like platform overnight.

Tucker has expressed that he wants “‘to appeal to different kinds of people,’ from his party’s most progressive voices to disgruntled Republicans.”

Marion Baker, 93, a Democrat in the state, told The New York Times that “you don’t build Rome in a day” and that it takes time. It’s a slow build.

America is not a far-left country. With few exceptions, party fringes may have their moments, but they’re usually short-lived.

For the past few weeks, I’ve blogged about the Democrats’ loss of registered voters, how millennials have turned their backs on the Democrats because they want jobs, and a Democrat pollster’s recommendation the party concentrate on the economy. Even Minority Leader Nancy Pelosi (D-CA) embraced the latest data and has urged Democrats running this year to concentrate on economic issues and cool it with impeachment talk.

It’s a little late to be making huge adjustments, but leadership seems to understand that the true Democrat agenda is not a vote-winner. Not this election cycle.

They want him to “look” moderate until election day. If elected, they’ll expect him to move to the hard left. It’s the same old story.

You are correct, for the most part, Exiliado, but with one exception. The lefties expect him to move to the hard left as plan B.

Their true hope is to elect hardcore commies the first time around, without the pretense of “moderation.”

The internal war between the outright commies and the establishment “moderate” commies can only be good news for the country.

I live here in Central Arkansas and to be honest I have never heard of this guy until a week ago I was 2 of his signs up at different locations. I personally don’t think he has a chance even though French Hill is basically just a seat filler. Most of us here figured out after Blanche Lincoln that the Democrat party had left us.

But as far as Tucker goes, if I don’t see more support for him here in the most liberal part of the state then he doesn’t have much of a chance.

Democratic leaders, however, have absorbed this information and have begun to back more so-called “moderate” Democrats

The D’rats need two things to capture offices; money (both before the election, to finance the campaign, and after, because far more people than the candidate himself plan to get rich after he’s in office); and votes (honest and legal, or otherwise—it hardly matters which).

The socialist program may bring in scads of votes (oh boy, free stuff!!!!) but tends to make the money people nervous. So the D’rats will probably try to steer clear.

The counter ad should memorialize the Blue Dogs who were lied to by their fellow Democrats about abortion provisions in Obamacare, betrayed their constituents by voting for it, and were then promptly voted out of office next time they ran.

“This is a reboot. We all saw the original and it doesn’t have a happy ending”

Irony. I was one of those Democrats who got purged in 2008 because I wouldn’t accept Barack Obama as my lord and savior. Obama ran as a moderate but took a hard left after he was elected. Those first two years included the Stimulus and Obamacare. Moderate Democrats fell in line and voted for it. The GOP did not. This was the heyday of The Tea Party.

The 2010 election was a bloodbath for Democrats, and the ones who took the heaviest casualties were the moderate and “blue dog” Democrats. When the smoke cleared the GOP held the House and the Democrats that remained were all very liberal to lunatic fringe liberal. Obama wiped out the Democrat farm system too.

In 2008 I was literally told that my kind was no longer welcome in the Democrat party. As Donna Brazile put it, “We have a new coalition.”

Now they want my kind back.

MyIq, interesting because I’ll be in the same boat. I lost my wallet last year and at the DMV replacing my DL the clerk asked for political affiliation. I was already sick of Failure Theater and the “hold your nose and support McCain-Romney” betrayal of Never Trumpers. The GOP had recently passed the omnibus cluster – it was a small straw, but the last one.

Now I garauntee you, in 2024 these same Never Trumpers will beg me to support whatever Establishment POS they nominated at the convention.

Without a shred of self-awareness. Just like the people who “suddenly” want to pay attention to you now.

But Branco has that Donkey’s……number.

It would be a gosh darn shame if divisions between factions of the Democrat Party cost them the midterm elections.

First they must keep the republican out, then apply heavy pressure to get the new guy in step and failing that get somebody to primary him in two years. The pressure is easy, withdraw campaign funds unless he is obedient.

One think that has become very clear over the past 9.5 years is the Lunatic Left demoCraps have proven they support themselves more than they do Americans. When White Americans turned and voted for Trump they courted the Blacks who they then stabbed in the back and now that Blacks are turning to Trump they are supporting ILLEGALS. The demoCraps ONLY want Control, Power and $$$ ,, nothing else. Nazi Germany started out the same way.

Representing party, and even personal, views as opposed to the constituency is a fair charge that can be leveled against nearly every elected official.

At the next GOP Townhall, I think I’ll represent myself as a Democrat and ask if and how the candidate will represent me? Or am I supposed to just sit down and shut up?

(In truth, I already know the answer – my Congressman is most proud of all the Federal goodies he’s been able to score and deliver to the peasants in his care. He’ll call that “representing me.” But it will be interesting to see how he actually responds.)