“Unless you’re addressing those issues that are important to them, it’s hard to get them involved.”

A new Reuters poll shows that millennials have started to move away from the Democrat party. While the Democrats tout environment and social justice as key draws, the millennials who spoke to Reuters want mainly one thing: a stable economy.

The online survey of more than 16,000 registered voters ages 18 to 34 shows their support for Democrats over Republicans for Congress slipped by about 9 percentage points over the past two years, to 46 percent overall. And they increasingly say the Republican Party is a better steward of the economy.

Although nearly two of three young voters polled said they do not like Republican President Donald Trump, their distaste for him does not necessarily extend to all Republicans or translate directly into votes for Democratic congressional candidates.

The Democrats have long counted on young voters and will definitely need them in 2018 as the party tries to take 23 seats in the House. 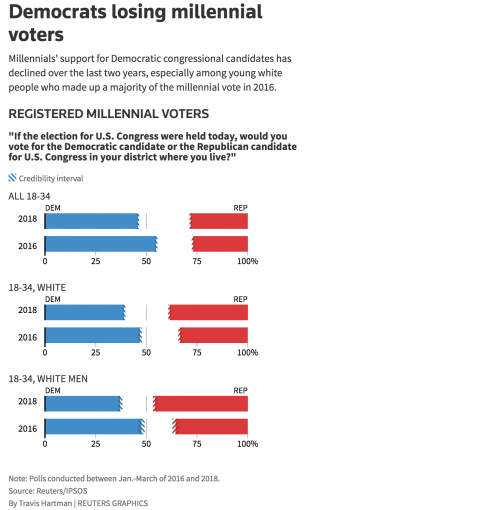 Reuters spoke with Terry Hood, 34, an African-American who took the poll. He voted for failed Democrat presidential candidate Hillary Clinton, but has now decided to “consider a Republican for Congress because he believes the party is making it easier to find jobs and he applauds the recent Republican-led tax cut.” He finds it “strange” to even mutter these words but noticed that the recent tax cuts have led to the government “taking less taxes” out of his paycheck.

The publication also spoke to Ashley Reed, a 28-year-old “white single mother of three in New Hampshire.” She supported former President Barack Obama, but as her personal life changed so did her politics:

Reed, now 28, grew more supportive of gun rights, for instance, while married to her now ex-husband, a U.S. Navy technician. She lost faith in social welfare programs she came to believe were misused. She opposed abortion after having children.

Reed plans to vote for a Republican for Congress this year.

“As I got older, I felt that I could be my own voice,” she said last month in Concord, New Hampshire.

New Hampshire’s 1st Congressional District is considered a swing district since it “has changed parties five times in seven election cycles.” It may go Republican:

At a campaign event at the University of New Hampshire in Durham, Mindi Messmer, one of eight Democrats running in the primary election, touted her work as an environmental crusader. But students in the crowd also raised many other issues, notably the local economy.

“People come to school here, and then they move away because they can’t get jobs,” said Acadia Spear, 18, of Portsmouth.

Spear said she would likely vote for a Democrat, but her peers nationally are increasingly looking to Republicans for economic leadership, according to the Reuters/Ipsos poll.

Venturing into millennial turf is part of the Democrat’s plan. Elizabeth Renda, a specialist for DNC young voter outreach, told Reuters that the candidates will go to college campuses and utilize social media.

But if Democrats aren’t focusing on issues important to millennials want, what’s the point?

Like I noted above, one of the candidates that visited a university considers the environment as a top agenda point, but young voters want jobs. They want a stable economy:

In New Hampshire, Eddie Edwards, one of two Republicans running for Congress in the 1st District, said he pitches millennials on ways the government should help college graduates pay off their student loans. He also argues that public secondary schools must better prepare students to find jobs without attending college.

“This is a generation that has much more access to information than others,” he said. “Unless you’re addressing those issues that are important to them, it’s hard to get them involved.”

However, the GOP shouldn’t cheer too loudly just yet. The poll also found that “[A] growing share of voters between ages 18 and 34 years old said they were undecided, would support a third-party candidate or not vote at all.”

The Reuters poll lines up with a Washington Post/ABC poll from April 16, which showed that the number of Democrats and Democrat-leaning independents registered to vote fell to 75% from 84% in November.

Democrats once had a 10 point lead “among all adults,” but that has fallen “to 4 points among registered voters and 5 points among those who say they’re both registered and certain to vote.” ABC News continued:

Self-reported registration is one indicator as it is less a measure of actual registration than of political engagement. The share of Democrats and Democratic-leaning independents who report being registered to vote has slipped from 84 percent in November to 79 percent in January and 75 percent now. That contrasts with 87 percent among Republicans and Republican-leaning independents, up slightly from 82 percent three months ago.

Further, among Republican likely voters, 95 percent say they would vote for their party’s candidate, which is up from 89 percent in January and now matches the level among Democrats, 95 percent.

Attacking Trump probably won’t work and neither will beating the social justice drum. Will the Democrats actually take time to listen to the voters, or go down with their agenda?

When they graduate with a degree in whatever studies, they will need a healthy economy far more than happy Delta Smelt. And, if they are white, they will get to watch less qualified people getting hired first because of diversity.

This is actually a worrying poll.

A large number of these voters are not supporting Democrats because the Democrats are NOT EXTREME ENOUGH.

On one hand seeing their expression when the bill comes due for the excesses in spending for these past decades will be amazing, but considering the number of boomers they will be forced to support may bring about real death panels as they cull the herd to keep the party going.

The expression on the woman in the Hillary Hat always me laugh.

Thank goodness for Trump and the Electoral College for preventing Hillary.

Sorry about that. I was shooting for the “reply button”. Yes, young people tend to become more conservative, but then there are always more young people.

of course, I was being a bit snarky, but assuming the demographic ‘Millenials’ is fixed, there will be no more, as a group, and it will shift towards conservative as they age, as always happens to most demographics (except Baby Boomers, who generally have remained as radical as ever).

But sometimes, not soon enough and not conservative enough to counter their earlier decisions.

What’s even more remarkable is that somehow Millennials hate Boomers more than Gen X does — I didn’t think that was possible, yet here’s the data.

Of course, all that is dwarfed by Generation Z (at least the white members) — when they come of age, so will the reckoning.

notamemberofanyorganizedpolicital in reply to thalesofmiletus. | May 1, 2018 at 2:07 pm

What is that Axios web site?

Democrats are not just losing young people, they have also alienated older people by pushing so many issues which run counter to our interests.

Destabilizing immigration from the Middle East.

Degrading our health care in order to supply free health care to those who do little or nothing to earn it.

Actively running interference, allowing persecution of George Zimmerman, his family, Officer Wilson and many others.

Selling us on Obama, who turned out to be a piece of crap.

There is so much more, any one of the mentioned issues is enough to lose a voter, all of them together is a disaster.

notamemberofanyorganizedpolicital in reply to JusticeDelivered. | May 1, 2018 at 2:08 pm

The Democrats have also lost most “minority” groups and many of their other past, reliable Democrat Party Plantation slaves, e.g. the Gay BLT members…..

Nobody has ever argued convincingly that universal suffrage was a good idea. Or even one we can expect the Republic to survive.

“As I got older, I felt that I could be my own voice”

I wonder whose voice she was when she was somebody else’s.

I’m voting for…. “go down with their agenda”.

“Attacking Trump probably won’t work and neither will beating the social justice drum.”

“Will the Democrats actually take time to listen to the voters, or go down with their agenda?” NO, and YES.

“Unless you’re addressing those issues that are important to them, it’s hard to get them involved.”

That’s true of every generation.

Maybe it’s because the Democrats have become the party of women in pussy hats, sneering down their nose at working families and serving up yesterday’s rotten ideas, insisting that they are gourmet delicacies.

Off the topic I love this picture of election night every time I see it.

The agony of defeat of the Hildebeast.

Will the Democrats actually take time to listen to the voters, or go down with their agenda?

Go down with their agenda till they lose in 2020. Trump’s second term will be the only thing powerful enought to break the Obama domination of Democrat agenda.