Plus more Republican likely voters have said they would vote for the GOP candidate.

While Democrats may see momentum ahead of the November 2018 midterms, voter registration may have them pull back their excitement just a little bit.

The latest ABC News/Washington Post poll shows that the number of Democrats and Democrat-leaning independents registered to votes has fallen to 75% from 84% in November.

Self-reported registration is one indicator as it is less a measure of actual registration than of political engagement. The share of Democrats and Democratic-leaning independents who report being registered to vote has slipped from 84 percent in November to 79 percent in January and 75 percent now. That contrasts with 87 percent among Republicans and Republican-leaning independents, up slightly from 82 percent three months ago.

Further, among Republican likely voters, 95 percent say they would vote for their party’s candidate, which is up from 89 percent in January and now matches the level among Democrats, 95 percent.

Democrats once had a 10 point lead “among all adults,” but that has fallen “to 4 points among registered voters and 5 points among those who say they’re both registered and certain to vote.” ABC News wrote that neither of those stats hold any significance, but I disagree, especially since a lot of races have become tight and the GOP holds such a slim margin in the Senate. 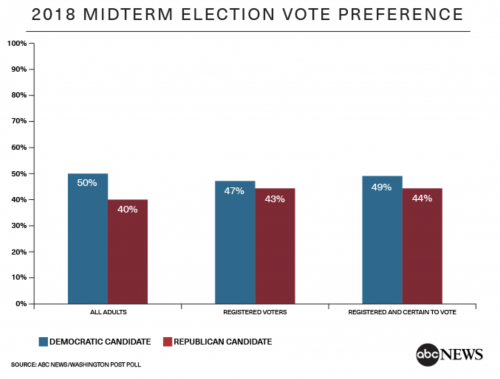 With the Republicans’ House majority at risk, 47 percent of registered voters say they prefer the Democratic candidate in their district, while 43 percent favor the Republican. That four-point margin compares with a 12-point advantage Democrats held in January. Among a broader group of voting-age adults, the Democrats’ margin is 10 points, 50 percent to 40 percent.

Republicans owe part of their improved standing to Trump’s thawing job ratings. The Post-ABC poll finds that 40 percent approve of the president, up slightly from 36 percent in January to his highest level of support since last April. Still, Trump continues to face majority disapproval at 56 percent, higher than any president at this stage since the dawn of modern polling, an indication that he remains a significant liability for Republicans on November’s ballot. 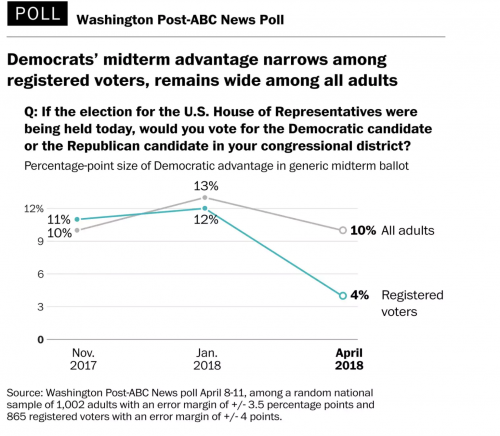 Gun policy has shown a strong presence with the poll finding that “[M]ore than 4 in 10 registered voters say it is extremely important that candidates share their views on gun issues.” Despite this, the poll found “that neither party holds an advantage among the 42 percent of voters who say it’s ‘extremely important’ that a congressional candidate share their view on the issue.”

Nice picture of a bunch of unhappy Dimocrats.

I went to bed depressed on the night of the 2016 election. I believed all the polls. Early the next morning I was pleasantly astonished, and laughed out loud watching the youtube results of the media all crying over the outcome.

Ms. Chastain, I’d recommend you plot those data points with their associated “margin of error” so as to give a more complete picture of them.

I wonder what the trend is in general news. Things like taxes, employment, North Korea, Middle East, Russiagate. Which side will benefit from news in coming months?

One wonders if it is possible that some “marginal” Democrats are finally waking up to the Left’s sedition and treason.

It is still a bit too far out to count on the polls at this point in time. So much can happen between now and the election which can swing the vote significantly in a short amount of time. The Democrats don’t have a lot of money as they were showering tons into special elections with the hope that it would be used as optics for the November election cycle.

Both parties are hugely flawed, but with the extreme left swing the Democrats are going with might help cause their downfall. The special elections had them pretending to be Republican principles while under the Democrat label, and against Republican candidates that left a lot to be desired, along with lies and controversy made up by the leftists, pushed by the propaganda wing of the party, and the results inflated in importance for what the voting trend will be.

There is danger in a number of seats being vacated, though many of those “retiring” were not sure seats for them.

Its going to be interesting to see what develops over the next few months.

Returning either chamber to Democrats would be like bringing back cancer cells of the 8 year long tumor of B. Hussein Obama.

Essentally meaningless polling this far out. Most of the events that will affect the midterm elections haven’t occurred yet.

Schumer was on record last fall about the Democrats needing to tamp down anti-gun sentiment… but then Parkland happened, and then David Hogg happened. And the Dems showed their true colors. They’ll be lucky to get a narrower minority in the House.

“…and the GOP holds such a slim margin in the Senate.”

Control of the HOUSE is what’s in play.

Republican control of the Senate is not.