Elizabeth Warren Wiki is about to gain another entry.

Elizabeth Warren recently became the first U.S. senator to take the “No NRA Money” pledge, which is about the easiest pledge a liberal politician has ever made, given that vast sums the National Rife Association has not donated to her previously.

Sen. Elizabeth Warren has vowed to do something about mass shootings by refusing to accept campaign donations from the National Rifle Association, even though she’s never received any money from the organization in the past.

She recently became the first U.S. senator to take the “No NRA Money” pledge, joining more than 200 other candidates and officeholders, most of them other Democrats also known for their opposition to the gun-rights advocacy group.

“I’m running for re-election to the U.S. Senate here in Massachusetts, and I pledge not to take a single penny from the National Rifle Association,” Ms. Warren said…

Interestingly, the NRA rates Warren at 7% in terms of protection of gun ownership rights. So, I suspect this may be one truth she has actually uttered.

Meanwhile, the NRA has issued a formal response:

As an aside, I would like to mention that in the book I recently reviewed, The Great Revolt, the authors noted that the NRA’s ad focused on female gun owners was essential in getting those women to vote for Donald Trump in 2016 and not Hillary Clinton. The NRA clearly demonstrates that it spends its money smartly, and I believe that this effectiveness in 2016 is why the attacks on the group have escalated.

This pledge is also the result of 3 factors that are currently impacting the 2018 election cycle:

As of right now, the Republicans are leading the generic ballot.  Blue wave anyone? 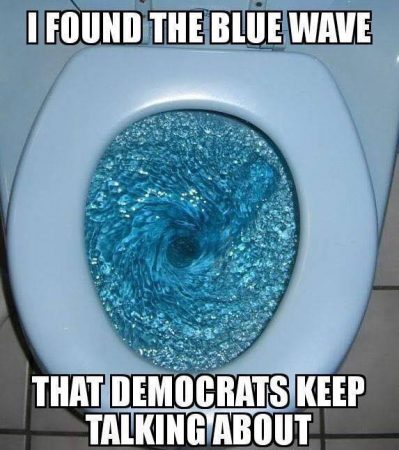 The Democrats are struggling to find a message other than “impeach Trump”.  This move smells of desperation so sulfurous that it is competing with Hawaii’s Kilauea for irritation and stench.

Do notify us when Trump does something virtuous. He has never failed to put his hand out when anyone wants to hand him money.

You people are anxious to make Warren into a villain in case she runs for president. Warren on her worst day is more virtuous than Trump is on his best.

How much has The Trump Organization been paid by the Secret Service for rental of golf carts? Just curious – can Trump simply put that money in his pocket? Does he even owe taxes as he grabs it? The tax bill was very generous to him. No it was not a coincidence.

When one throws a rock over a wall, the dog that yelps is the dog who was hit. Good shot, Leslie.

let me know when the rich ($$ wise) senator defers her senate salary.

Congrats YGIC on your first successful troll here at LI. Have you been undergoing remedial troll training? Or did your overseer pen this for you to show how it’s done?

Let’s look at this successful trolling and examine how and why it’s effective (as a diversion):

Do notify us when Trump does something virtuous. He has never failed to put his hand out when anyone wants to hand him money.

This is good! The implication here is that Warren is being “virtuous” rather than the grasping political hack we all–including, I suspect YGIC–know she is.

You people are anxious to make Warren into a villain in case she runs for president. Warren on her worst day is more virtuous than Trump is on his best.

How much has The Trump Organization been paid by the Secret Service for rental of golf carts? Just curious – can Trump simply put that money in his pocket? Does he even owe taxes as he grabs it? The tax bill was very generous to him. No it was not a coincidence.

The misdirection of doubling down on “Lizzie the Virtuous” and leading straight into misdirection is quite well-done here. Golf carts? Taxes? huh? So we go from Warren is clearly duping her voters stating she’ll reject non-existent NRA donations to Trump plays golf a lot. Defend that! And if you don’t care about Trump’s golfing, how about my strange and unfounded claims about his tax bill? Woohoo! YGIC has moved the discussion from Warren’s bizarre attempt to appear “virtuous” on a point that isn’t a point to directing our attention to Trump. Not bad.

However, I (for one) would like to continue at least the bare minimum of sustenance to the two most noteworthy trolls on this site.

They provide comic relief and a constant reminder of why President Trump was elected (and should be re-elected), as well as a reminder of the mindless anti-Americanism we face from the media, schools, courts and socialism in general.

Apparently you missed the obvious point, so allow me to enlighten you! I will not accept any NRA money for my presidential campaign, either! See what a fine fellow that makes me!

What do you mean you people…just because we’re not yellow like you, doesn’t mean you can marginalize us with your privilege.

Fidel, you’ve become a parody of yourself.

NOTICE OF TRUMP DOING SOMETHING VIRTUOUS:

As you know, I am not at all a fan of Trump’s. However, you want to know about his virtuous deeds? Here you go. Now tell me about one good deed Taxajawea has ever done in her life.

When LI called for supporting NRA, I signed up for five years. It is nice to know that Warren isn’t getting any of it:)

Two things come to mind;
1. Warren is similar to a “technical” virgin. She tried it once and didn’t like it.
2. Is that an “Indian” motorcycle she is on?

2. Is that an “Indian” motorcycle she is on?

Well, we know she didn’t build that.

She’s too old for a Menstrual Cycle.

Will somebody please throw that douchebag off the Harley. That picture is too damn un-American.

Psycho Warren on her motor-psycho??????

rinardman in reply to notamemberofanyorganizedpolicital. | May 26, 2018 at 3:55 pm

Why bother giving the commie attention?

I’d love to see Democrat politicians pledge not to take money from Premeditated Homicide, an organization that does actually kill children everyday.

This is like David Duke bragging that he never took a dime from the NAACP.

I just signed the, “No Sex With Gal Gadot” pledge.

A bridge too far

“You people are anxious to make Warren into a villain in case she runs for president. Warren on her worst day is more virtuous than Trump is on his best.”

What do you mean, “You people”?

She’s as big a clown as hillary klinton. All that’s missing is the russian hat and the reset button.

Too late, hildabeast already got all of Pretendian’s staff.
Scroll down, you’ll know the picture when you see it.

I’d like to see her take it off the kickstand and make a lap around the parking lot. Wonder if they left the “Injun” running?

What a pity that she didn’t virtue signal by not accepting a position at Harvard under the guise of being “native American.” Or not practice law without a license. Or take nearly $400K of salary for teaching a single course while simultaneously complaining about the high cost of tuition.

She is a hack of the first order. Fauxcohontas indeed (and in deed….).

Warren denies women the means to prevent assault and rape-rape. She denies men and women the choice and dignity to self-moderate and be responsible for their own life and welfare. No fetuses or offspring, conventionally known as babies, involved.

For all the liberal whinings, the NRA gave about one million . The teacher’s unions gave over 32 million. The same ones crying about no supplues. The same ones who teach those kids to fall apart at the slightest setup. Tet never held to task for the failures of our educational system.

What, Princess Liawatha? Hasn’t her own BS backed up and drowned her, yet? On the OTHER hand, I DID hear a rumor she once kneed Hiawatha in the groin when he failed to donate heavy wampum to the DNC. Of course, it IS just a rumor, and you can’t believe ALL of them. Or can you?

That photograph reminds me of a joke:

Q: What is the difference between a Harley and a Hoover vacuum cleaner?
A. One has the dirtbag on the inside.