With the Cruz campaign in full gear, the O’Rourke campaign looks like they’re in over their heads

A seasoned campaigner, Cruz and his campaign crew are already playing hardball.

During a stump speech in Beaumont, Texas Monday, Cruz brought up the anti-second amendment op-ed penned by former Supreme Court Justice John Paul Stevens. Cruz suggested reporters ask Rep. O’Rourke whether he agrees with Stevens, seeing as O’Rourke bragged about his F rating with the NRA. Cruz accused O’Rourke of having an “extreme position” on the second amendment “even within Washington Democrats.” 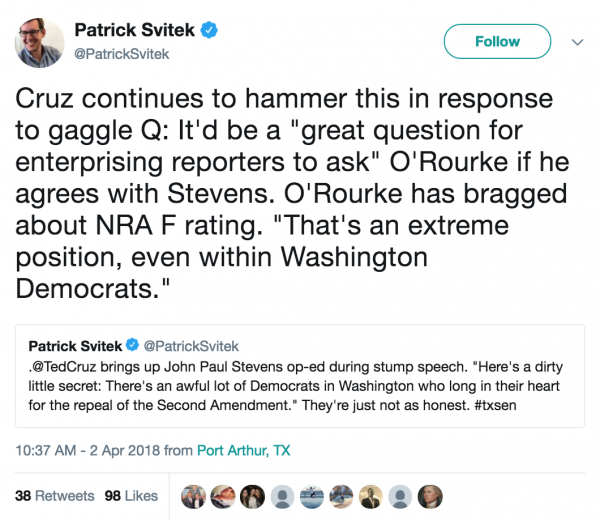 After the Parkland school shooting, O’Rourke said there was no reason AR-15s should be sold to the public during a panel discussion at the South by Southwest Festival in Austin.

The O’Rourke campaign also made an unforced error by way of a Snapchat filter. The filter, which can be placed over photos as a show of support inaccurately suggesting Cruz has not spent much time in Beaumont. 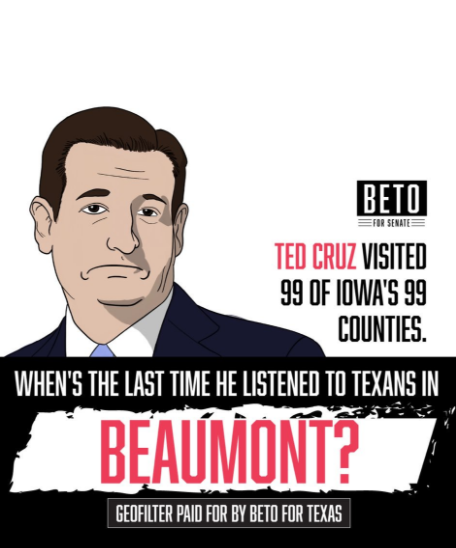 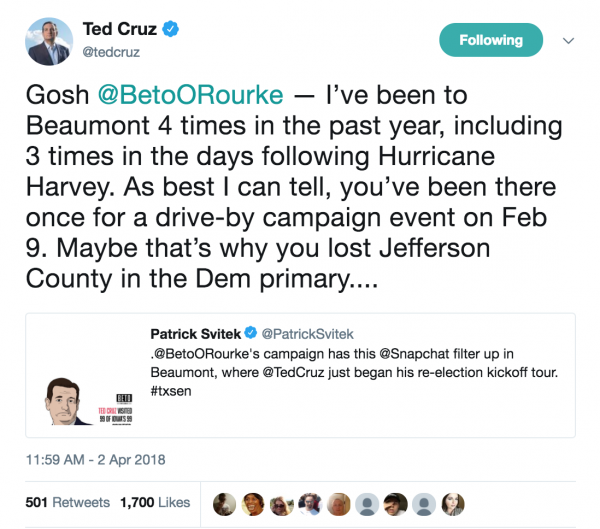 If you’re going to attack your opponent publicly, maybe make sure your information is correct first? 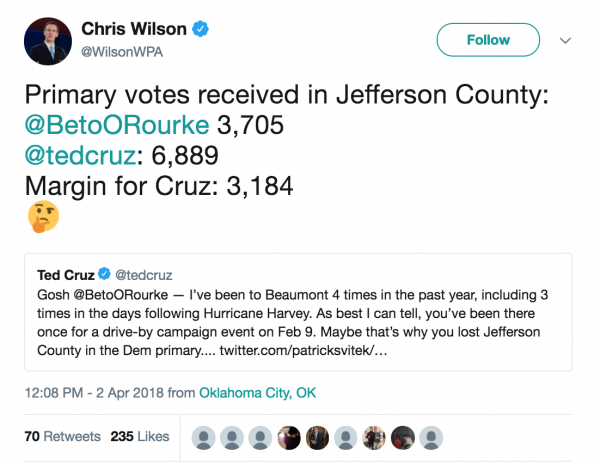 With the Cruz campaign in full gear, the O’Rourke campaign looks like they’re in over their heads

It’s tough being a beto male.

Cruz, please explain to Beto how his position is not just extreme, even for democrat standards, but is in fact, Unconstitutional and he would be lying to take the oath of office with that position.

Neither O’Rourke nor his likely voters care about that.

You are correct, though Robert O’Rourke and his supporters don’t need to worry about not caring for he won’t be a US Senator come January, 2019.

Oh, almost forgot, he won’t be the US Representative from Texas’ 16th Congressional District either.

Oh, for an edit function! Before anyone points out my error, he will be the US Representative until Noon on 21 January 2019.

Minor correction. Beto will be a Congressman until Jan 03 19. That is when the new Congress officially starts.

The El Paso Dems made sure he stayed in DC long enough to get his government pension cheese and then hand selected a wise Latina to be next in line for the seat. It’s a completely safe Dem seat.

Stan – Thanks, I was thinking of Inauguration Day.

Based on the numbers in the Texas primary held last month, and using a formula that’s given very good results in previous Texas races, I want to go on record (seriously) as saying that the November outcome in the Cruz-Beto race is going to be Cruz 67%, Beto 33%, +/- 2 points.

What’s the name of the campaign manager that thought it would be a good idea to call out Ted Cruz?

Has he been living in a box the last 6 months? Twitter is littered with the heads of The Once Smug who took a poke at Cruz.

“Neither O’Rourke nor his likely voters care about that.”

That’s not his audience.

Beta doubled down on his anti – 2nd A rant on a Texas Tribune live feed this afternoon….. I poured a stiff drink to listen to it just to see if he’s still as incoherent and stoned as he was when I had to work with him…. and by work, I mean put up with him “popping in and out to offer his suggestions” before darting off to lunch or golf or somewhere else!

“Song of a Jewish Cowboy”

So O’Rourke is going for “Biggest Loss” this year, yeah?