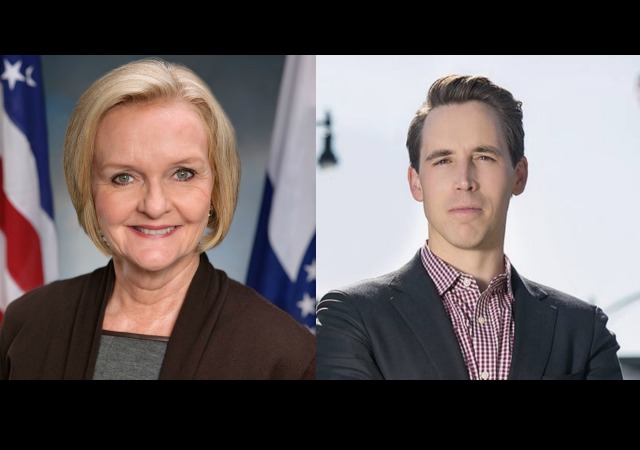 The Missouri Senate race has garnered since President Donald Trump won the state by more than 18 points in 2016. Polls have shown that McCaskill faces a tough race against state Attorney General Josh Hawley, who more than likely will be her GOP opponent.

Politico thinks McCaskill can slide on through re-election thanks to the scandals that surround Missouri Republican Governor Eric Greitens. But it looks like the publication could be reaching.

Greitens was indicted in February for allegedly taking a nonconsensual nude photograph of a former lover, and the woman testified under oath that Greitens had a forced sexual encounter with her. As if that weren’t bad enough for the GOP, Greitens is refusing to step down, thrusting two of the most prominent Republican elected officials in the state into open warfare.

Hawley demanded that Greitens resign and triggered a new investigation into the governor’s fundraising, resulting in a second indictment last week. Greitens has fired back by seeking a restraining order against the attorney general, saying that Hawley’s call for resignation meant he could not conduct an impartial investigation of the governor.

The scandals are damaging the GOP at the most critical interval of its six-year wait to unseat McCaskill.

“[Greitens] is jeopardizing the whole Republican Party of Missouri,” said Rob Jesmer, a top Republican consultant who was executive director of the National Republican Senatorial Committee when Akin made his infamous comments about rape and abortion during McCaskill’s last campaign.

Okay, yes, having a governor swimming in scandals can harm the party, but will it actually affect Hawley? A poll released on April 12 shows the two basically tied. From The Washington Examiner:

A Mason-Dixon Poll conducted April 4-6 among 625 registered voters found McCaskill and Hawley are in a dead heat, 45 to 44 percent, according to the St. Louis Post-Dispatch. Eleven percent of respondents said they were undecided, and the margin of error was plus or minus 4 percentage points. “Independent voters,” the pollsters said, “are equally divided between the two candidates.”

McCaskill came in just below Trump’s favorability rating, with 41 percent favorable versus 39 percent unfavorable, to the president’s 44-38. Hawley, who technically still has to win the GOP primary in August, was unknown to about one in six voters, while one in five were neutral on McCaskill.

The Cook Political Report still has the Senate race as a toss-up. RealClearPolitics’ average is McCaskill up by +2.3, but also considers the race as a tossup.

The GOP primary takes place on August 7. Hawley is the favorite as he leads his opponents in fundraising and received endorsements from Trump and Senate Majority Leader Mitch McConnell (R-KY).

Politico mentioned in passing what Hawley has done since Greiten’s scandals emerged.

On April 12, Hawley demanded the governor resign after a state House committee released a report on its investigation into Governor Greiten’s scandals. From CNBC:

In a statement, Hawley went as far as calling explosive allegations against Gov. Eric Greitens detailed in a new report “impeachable.”

“The conduct the Report details is certainly impeachable, in my judgment, and the House is well within its rights to proceed on that front,” Hawley said. “But the people of Missouri should not be put through that ordeal. Governor Greitens should resign immediately.”

Last week, Hawley launched another investigation against Greitens for allegedly “obtaining a charity donor list without permission.” From CNN:

Missouri Attorney General Josh Hawley announced that his office had “uncovered evidence of wrongdoing” by the governor that he could be charged or prosecuted for related to an investigation into a veterans charity Greitens founded.

Hawley told reporters at a news conference that his office had found evidence that the governor obtained an electronic donor list from the charity The Mission Continues without permission and used the internal list for “political fundraising.”

“If proven, these acts could amount to the unauthorized taking and use of property — in this case electronic property. Under Missouri law, this is known as computer tampering and given the value of the list in question, it is a felony,” Hawley said.

The relationship between Hawley and Greitens has soured so much that Greitens filed a temporary restraining order against Hawley. The filing “requests the appointment of an independent prosecutor to take over the attorney general’s investigation into the governor’s ties” with the charity. Greitens and his lawyer believe that Hawley cannot remain impartial in the investigation.

If anything, what Hawley has done and said should give him more respect from the Missouri voters.

I wouldn’t be shocked if McCaskill wins in November. It’s hard to beat an incumbent in any race, but I still think Hawley will come out on top and his decisions on Greitens may actually help him in the long run.

The only way McCaskill wins is if the GOP runs a mealy-mouthed squish against her, or if the GOPe sabotages the race if Hawley is an actual conservative.

The GOPe has done that before – more than once.

They’re retiring to throw the House to the Dictatorship Party!

Don’t let the “GOPe” get away with that folks!

I don’t approve of what Hawley is doing.

It’s the legislature’s job to determine if to impeach, not his.

And so he took the email list of a charity he founded or works with?! SO?!

Hawley is a little too holier-than-thou for me, for sure.

Where does he live, that only saints fill public office?

Since Hawley is the state’s AG it is certainly within his purview to say that the governor meets the standards for being impeached. Should someone who is not a legal expert decide when he can be impeached? Any AG is going to appear hollier than most since they go after the wicked. Imagine a Demorat actually requesting an indictment against a fellow Dem! My God! Where could we decide to start on that one?

In Missouri the sole power of impeachment is in the House.

Of course nothing prevents the AG from having an opinion, but the House is under no obligation to pay any attention.

We in Missouri loathe the loathsome baby killing advocate McCaskill.

On the west side of the state, I’ve yet to meet anyone around Kansas City who will voice support for McCaskill. However, St. Louis or Columbia (MU territory) is another matter altogether.

Hawley is reaching for a fig leaf in this matter only because he is trying to get elected. Under any other circumstance, he would leave it at the Missouri ethics commission’s ruling in 2016 on this donor’s list controversy.

The Missouri Times has an excellent overview of this witch hunt.

I think that to be the AG of MO and to have “No comment” on this issue would smack of cronyism even though he has no direct input into the impeachment process. That would be like the many Dems who rallied to Franken’s defense after he was outed as a pig. One of the most reprehensible things about pols is their ability to NOT answer tough questions. Hawley not only answered the question but gave a solution to the problem. Rare in these times.

I’m not reading much concern over whether Greitens actually did these things. The fact he has been accused is apparently sufficient.

Sufficient for what? To use your discernment about supporting him in office, or to find him guilty of a crime?

You know, since you’ve bothered, I’m going to take the time to get this off my chest. Let’s set aside, for the moment, that the Greitens case involves blackmail using a photo the prosecution does not possess and which may not even exist, plus recovered memories of his alleged victim. These should be red flags, but let’s set that aside, because frankly, we don’t know the truth, we can’t.

The bar for actively supporting the removal of someone already elected to public office should be high. I don’t like making an issue out of it, but I view the Supreme Court allowing the Paula Jones case to go forward to be the height of folly, and everything that flowed from that decision was predictable. Apparently, someone thought, oh no, presidents are such moral people that they’d never abuse the power of the state to defeat a civil lawsuit. That went against human nature and human history. And yet, even then, the public was not sold on impeachment and conviction because they believe they, the public, should be the judges that truly matter, barring extremely horrific abuse of elected office. Nothing even remotely related to private sex cut the mustard with Clinton.

I don’t have to agree with it in full to learn from it. However, it’s my belief that not supporting someone for re-election, and supporting his impeachment and conviction for crimes which remain unproven in a court of law, are disconnected extremes. Impeachment and removal – or using the threat of that to force a resignation, for that matter – should be for things we know, not things we suspect. Suspicions are a dime a dozen. Demanding public figures resign, or be removed, for suspicion alone, means that gossips will rule the world. That doesn’t look like healthy republican government to me. (I’d say democracy, but that word has been abused too greatly.)

“I view the Supreme Court allowing the Paula Jones case to go forward to be the height of folly, and everything that flowed from that decision was predictable. Apparently, someone thought, oh no, presidents are such moral people that they’d never abuse the power of the state to defeat a civil lawsuit. That went against human nature and human history.”

I’m sorry. That seems completely contradictory to me.

“However, it’s my belief that not supporting someone for re-election, and supporting his impeachment and conviction for crimes which remain unproven in a court of law, are disconnected extremes. Impeachment and removal – or using the threat of that to force a resignation, for that matter – should be for things we know, not things we suspect.”

This is too conflating in terms to allow any response. I can most certainly decide not to vote for someone on evidence that would be insufficient to convict them of a crime, or even accuse them of any crime. I can most certainly pressure someone to leave office on evidence they’ve acted wrongly, and never criminally. I NEVER need a legal proceeding to use my judgment.

I mean, I write this well aware you’ve made clear the fact he’s slept with a woman not his wife makes him ineligible for office in your mind, but that position is essentially, “My God, Jim, he cheated on his wife… there’s no telling what savagery this man is capable of!” So back to where we started, isn’t this an amazing lack of curiosity as to whether he actually took a photo of this woman in a vulnerable state, engaged in sexual assault against her, or committed campaign finance fraud.. he cheated on his wife, let’s throw him to the lions and be done with it?

Sure, you can, but isn’t that standard truly… remarkable? Let’s go with remarkable.