Defense Minister: “This is a member of the military arm of Hamas who holds a rank parallel to that of captain”

The clashes at the Gaza-Israel border under the banner of the “March of Return” have resulted in approximately 28 Palestinians dead (the figures released by Hamas-controlled authorities vary).

Of those, at least 19 have been confirmed military members of Hamas or other terror groups: 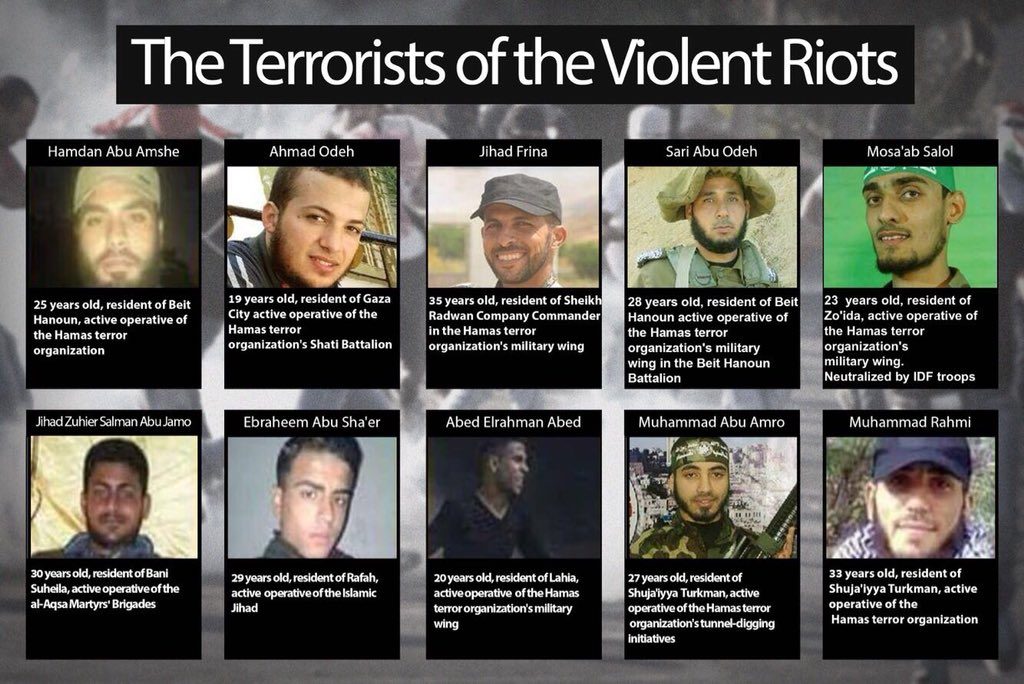 Israel’s Defense Minister and two spokesmen for Prime Minister Bibi Netanyahu have asserted that photographer/journalist Yaser Murtaja, who was shot and killed on April 6 about 100 yards from the border in an area filled with dark smoke from burning tires, was a Hamas operative.

Murtaja’s death has generated much controversy and media coverage: 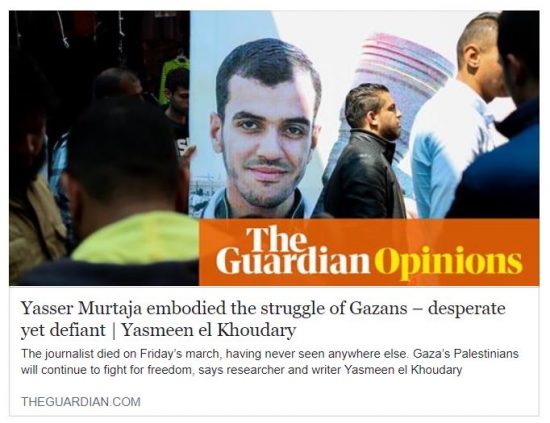 What difference does it make if he was a Hamas member? As with the others, it raises the question why, if this was just a peaceful protest and not intended to breach the border for a terror attack, such a high percentage of those shot near the border were military operatives of terror groups. If this was, as I believe and the evidence shows, a terror operation operating under cover of a civilian protest, then Israel was justified in treating it like a military threat.

Defense Minister Avigdor Liberman on Tuesday said a Gaza journalist who was reportedly killed by Israeli gunfire over the weekend was a member of Hamas.

The claim was immediately rejected by one of Yasser Murtaja’s colleagues, who called the statement “ridiculous.”…

Liberman told reporters on Tuesday that Murtaja was a “terrorist” who had been on the payroll of the Hamas terror group since 2011. He said Murtaja had used a camera drone to collect intelligence on Israeli forces along the border.

“This is a member of the military arm of Hamas who holds a rank parallel to that of captain, who was active in Hamas for many years,” Lieberman said. “Once again we see how Hamas uses the media, ambulances and patients, including cancer patients who are sent to hospitals in Israel,” to carry out “terrorist missions.”

The defense minister provided no evidence to support his claim about Murtaja….

Murtaja was known to operate camera drones, despite it being illegal to import them into Gaza. However, family members, eyewitnesses, and fellow journalists repeatedly denied that he was flying one on Friday when he was shot.

Ofir Gendelman, Netanyahu’s spokesman for the Arab media, tweeted out Liberman’s announcement in English (below) and Arabic:

The photographer (#YasserMurtaja) was a terrorist with a prior association w/ the military wing of Hamas. He held the rank of captain & was paid regularly by Hamas since 2011. He used to fly drones to collect intel on IDF forces at the front. 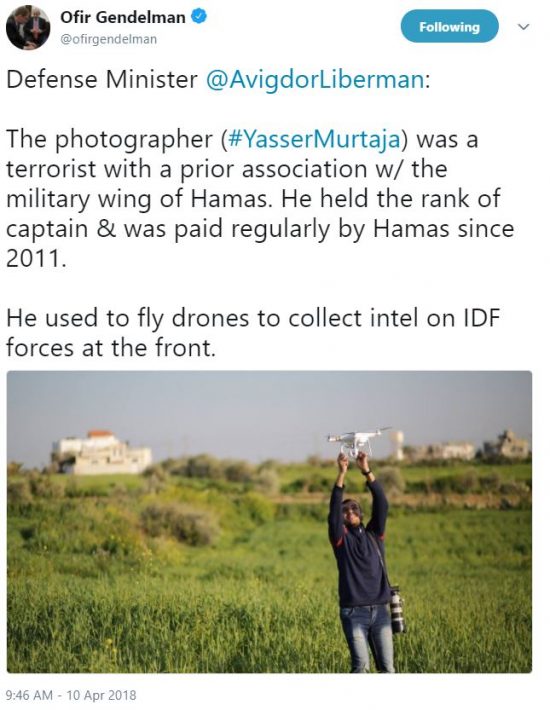 Turns out the “photographer” killed in Gaza was an officer in Hamas, a terrorist org that seeks Israel’s destruction. On Hamas’ payroll since 2011. Used his drone to collect intel on Israeli positions. Countless reporters called him a “journalist.” Will they correct the record? 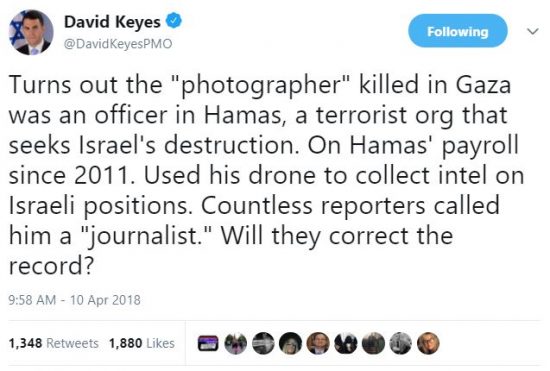 The accusation, accordingly, comes from the highest levels of Israeli government.

Unnamed security officials also made the accusation to Israeli media:

Israeli security officials pushed back on claims IDF forces killed an Arab journalist during riots on the Israel-Gaza border recently, saying the slain photographer was in fact a veteran member of the Hamas terror organization.

Last Friday, Yasser Murtaja, 30, was killed during clashes on the Israel-Gaza frontier.

Arab media outlets described Murtaja, a resident of the southern Gaza city of Khan Yunis, as a “photo journalist”, and said he had been killed by IDF fire.

On Tuesday, however, Israeli security officials pushed back on the claim, telling Walla! News that Murtaja was in fact a long-time member of the Hamas terror group. The sources told Walla! Murtaja held the rank of Neqqib, or Captain, in Hamas.

“For years he served as an officer with the rank of Neqqib in Hamas’ security forces in the Gaza Strip,” the sources said.

“He was an activist who was involved with activities as part of [Hamas’] security apparatus on a daily basis, and provided a great deal of aid for their activities.”

This video from RT shows how a drone could be used over the “March of Return” to provide operational intelligence:

If true, this would not be the first time terrorists have used journalist credentials.

The family of Malki Roth, murdered in the Sbarro Pizzeria bombing, tweeted how the mastermind, Ahlam Tamimi, used her journalist credentials for easier travel to plan the bombing: 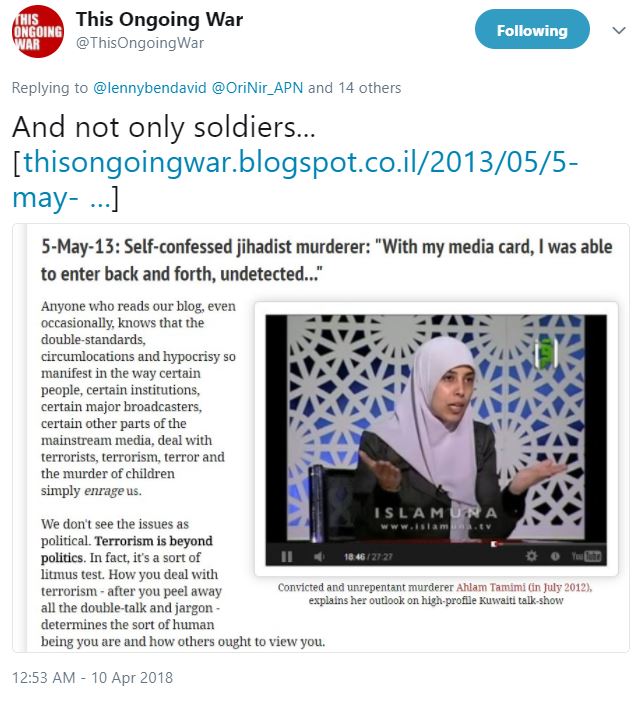 Palestinian use of ambulances to transport fighters also is well documented.

We don’t know what Murtaja’s role, if any, was in whatever operations Hamas was running under cover of the Great March of Return. It may be that he was just a photographer in the wrong place at the wrong time. More details of the shooting — for example was it deliberately targeting him or not — are not currently known.

UPDATE 4-13-2018 –– The IDF has issued a statement confirming Murtaja’s role in Hamas. Many critics had asserted the lack of an official IDF statement to discount the assertions: 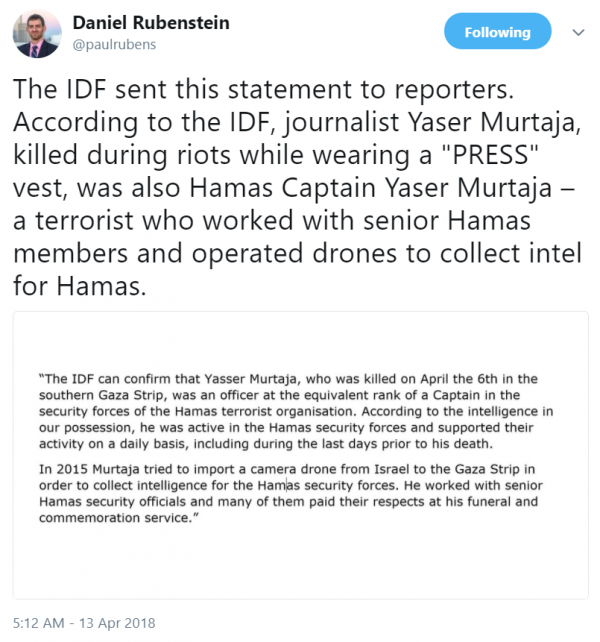 Hamas now resembles ISIS in a small but telling way. ISIS was a marketing organization which relied on spectacular, bloody actions as a recruiting tool. Hamas has now shifted to marketing. The goal isn’t recruitment but survival. Hamas faces a cut off of funds from Sunni governments, divisions between it and the PA and a West Bank that remains largely indifferent to the March of Return. Israel has closed most of its tunnels and Egypt remains hostile.

What to do? It needs to keep the western press focused on “the struggle” and not on its declining legitimacy. The struggle keeps western funds pouring in. The March was intended to serve these ends. Hamas has avoided the appearance of too much cooperation with Shia Iran and Hezbollah—too much alliance would kill off Sunni donors. Hamas remains more isolated than ever and cash spigots are closing. If they deem the March a failure, its next act is likely to be more spectacular and bloody. This would symptomatic of further decline

Perhaps all those Hamas billionaires could start self funding their political party eh?

Good business if you know the right people..right?

Glad he could oblige.

So when is mueller going to burn tires outside the white house?

The question is why is Hamas doing this now?

This seems to be the kind of inconvenient question the anti-semitic MFM should be asking but of course never will ask!

Hamas is doing this now because their missiles have failed to bring Israel to heel due to Israeli anti-missile systems. And they are very quickly losing all of their attack tunnels due to Israeli technology and a barrier they’re digging into the border to prevent future tunnels.

Plus, anything they can do to paint Israel in a bad light they’ll do. They simply don’t care about Gaza residents AT ALL.

Hamas is struggling for attention. They know Israel is going to kill anyone trying to enter Israel and that’s why they do it. It brings them attention and attention means money.

what is the difference between a ‘journalist’ and a spy ?
who they work for – same objective.

The Palestinians have proven time and time again they are Pathological Liars ,, well versed in spewing hate, bigotry, division and propaganda. Sounds very much like democrats !!

In the next battle, Hamas will be prepared to frustrate the tactics of Israel from the last battle.

Presuming he was just a journalist, the protesters ignited tires to obscure potential targets from Israeli snipers, and then complain that someone who shouldn’t have been shot got shot. Did they think that the smoke would cause Israel to not using gunfire at all? Anyone with any sense knows that approaching a heavily-defended border like that of Gaza is asking to be shot. (FYI, I used to patrol the East German border at the Fulda Gap. We just didn’t fool around near that border, knowing that an incident could be only a mistake away.)