Palestinians in Gaza don’t need to destroy the environment, they just need to keep Hamas and other terrorists away from the border.

Palestinians in Gaza are planning a massive tire burn for April 6, to provide cover for another assault on the Israeli border.

We were among the first to report on the plans for this ecological disaster, Hamas plans massive tire burn for next assault on Gaza-Israel border.

Such a large tire burn would likely cause an ecological disaster:

As Gazans assemble thousands of tires to burn during Friday’s planned protest on the coastal enclave’s border with the Jewish state, Israel’s liaison to the Palestinians penned a letter Wednesday to the head of the World Health Organization calling on him to prevent the “ecological catastrophe.”

“This is a serious environmental issue that will harm the health of the residents and will cause unprecedented air pollution,” wrote Maj. Gen. Yoav Mordechai, the head of the Coordinator of Government Activities in the Territories, to WHO Director-General Tedros Adhanom.

“I call upon you, as the head of an international organization whose goal is to promote health and protect natural and environmental resources, to do everything in your power to publicly warn against this ecological catastrophe and to protest Hamas’ irresponsible behavior,” he added, referring to the terror group that rules the Gaza Strip and has been supporting the protests.

This premeditated manmade disaster finally is getting mainstream media attention, as this NBC News video shows:

Contrary to Palestinian propaganda repeated mindlessly by western media, it was clear that almost all of the Palestinians killed in the prior border clash were not peaceful civilians, but military members of Hamas and other terror groups. As I previously wrote, the “Great March of Return” was not a protest, it was a military operation:

It’s clear that the Great Return March was not a protest, as it’s described in western media, but a military operation using a protest as cover to try to slip terror cells through the border fence. All of the arguments about how Israel supposedly used excessive force on “protesters” ignore that this was a military operation by Hamas and Israel was entitled to respond accordingly.

As we have seen in the past, such as in the kidnapping of Israeli soldier Gilad Shalit, it takes only a small terror team to slip into Israel to do great damage…

Despite hugely inflated claims that Israel “shot” over 700 people, it has become clear that Israel targeted a small number of terror operatives from among the huge crowd of nearly 30,000 people. As experience journalist Zev Chafets points out, Hamas was surprised by this tactic:

For decades, Hamas has tried and failed to defeat Israel through conventional military means. Lately its effort has been increasingly frustrated. Hamas rockets get shot down by the Iron Dome missile defense system. Attack tunnels are discovered and destroyed. Individual suicide bombers are killed or thwarted by sophisticated security measures.

The march unveiled a new tactic, mass swarming, designed to force Israeli troops at the border to commit mass killings or flee — a win-win from the Hamas perspective. It didn’t work that way on Friday.

But the IDF forces personally commanded by Chief of Staff General Gadi Eisenkot, used snipers to pick off individual leaders in the putatively civilian crowd (at least five of the dead were later identified as Hamas soldiers)….

We documented this in PHOTOS: Most Palestinians killed at Gaza border clash were terrorists.

In a subsequent post about the tire burn, I noted that the number of identified terrorists was likely to rise:

The confrontation at the Gaza-Israel border during the so-called “Great Return March” last Friday reportedly resulted in 18 deaths of Palestinians, at least 11 of whom have been identified as Hamas, Islamic Jihad or other terror military members. When more information becomes known, it is likely to result in all or almost all of the dead being terrorists.

Now there is even more evidence.

Of the 19 people reportedly killed (18 the day of the clash, one subsequently), at least 15 have been positively identified as terror group operatives. Honest Reporting has the story, Exposed: More Palestinian ‘Victims’ Identified as Terror Org Members:

This article is translated and re-posted from work by Israeli blogger Abu Ali taken entirely from open Palestinian sources (as opposed to unattributed military intelligence) in the aftermath of confrontations at the Gaza border. The blogger’s expertise and the information below have been corroborated to HonestReporting by Colonel Grisha Yakubovich (Res.), the former Head of the Civilian Department in the IDF’s Coordination of Government Activities in the Territories (COGAT) unit and an Arabic speaker and expert in Palestinian affairs.

… Many claims have been voiced since then against Israel’s excessive use of force in an attempt to suppress the demonstrations on the fence. There were also allegations of Israeli snipers indiscriminately causing harm to civilians.

In the following document, I will present the data on the fatalities as they were recorded in the Palestinian media – by open and public means.

I would like to point out that in the days following March 30, two more fatalities were added to the list of fatalities, which are included in the document.

Before the data is presented, and for the sake of readers’ convenience, I would like to point out that of the 19 killed there are:

Total of 15 persons with actual military identification. Another 4 whose connection to military activity has not been proven.

Note: Failure to find any connection publicly in the Palestinian media does not mean that they are not military activists.

Another important factor to consider when examining the identity of the dead and their affiliation is the fact that out of the 19 killed, it is possible to clearly identify 15 military activists, i.e. around 80% of those killed at a minimum.

Honest Reporting has uploaded the images and documentation to Scribd (pdf.) Here are the images. Note that it is possible that more than 15 of the 19 were terrorists, but incomplete information was available for the others. 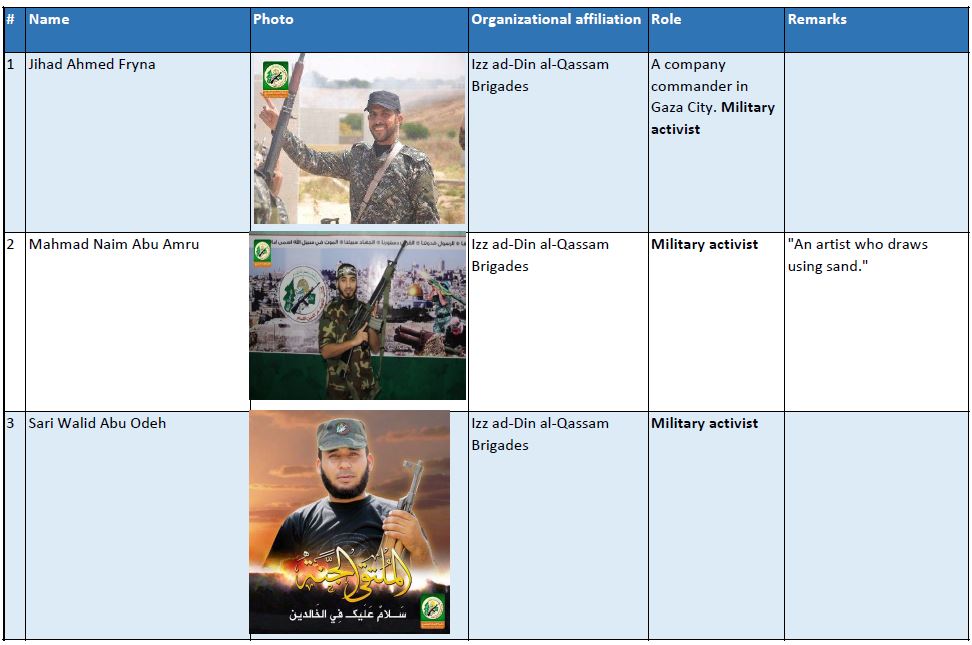 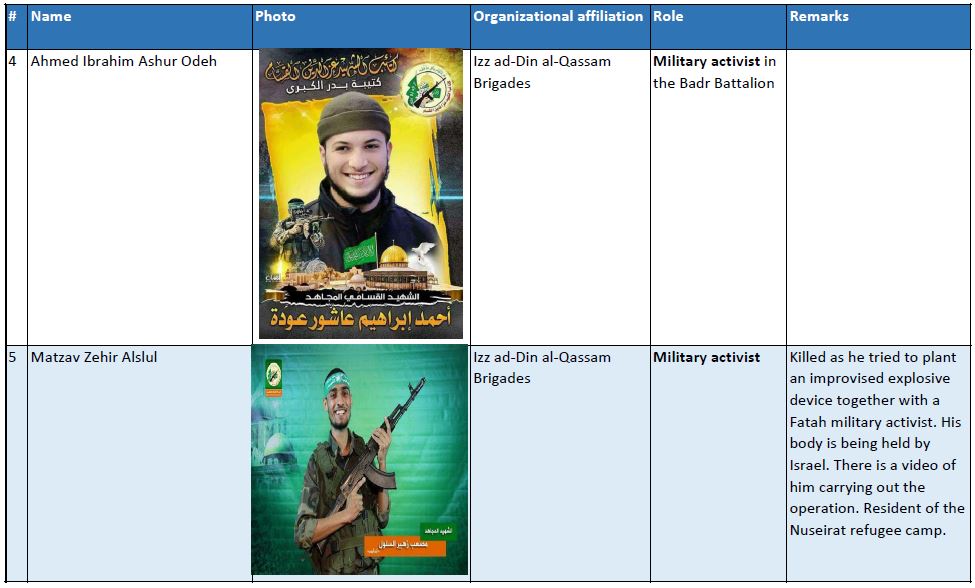 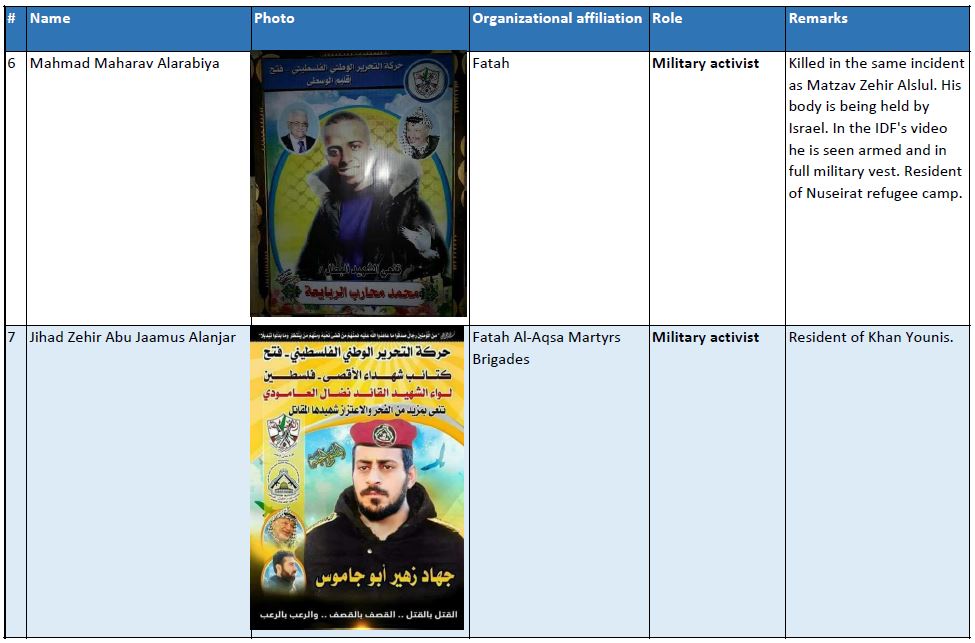 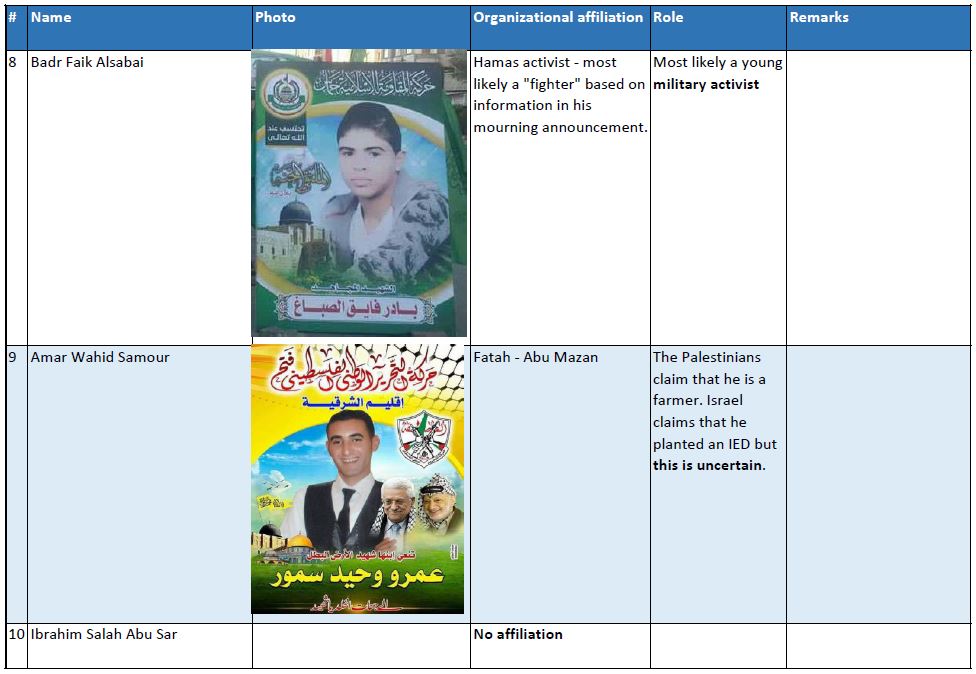 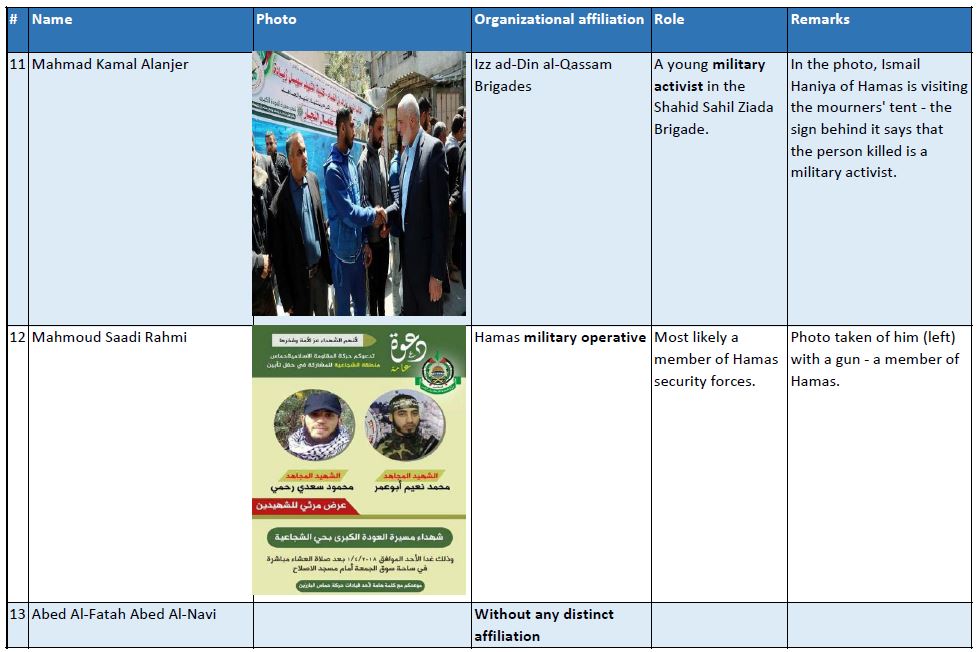 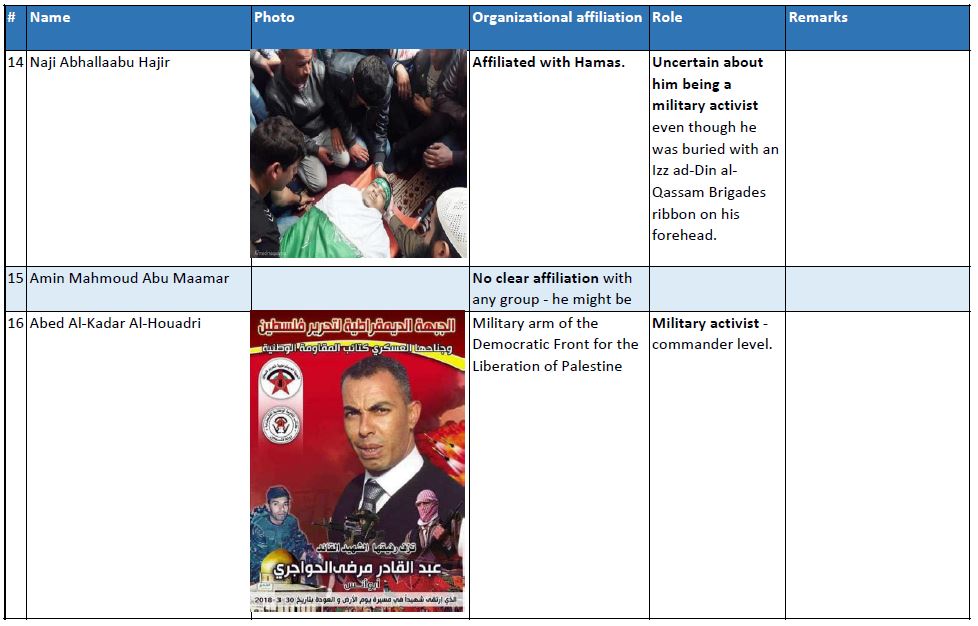 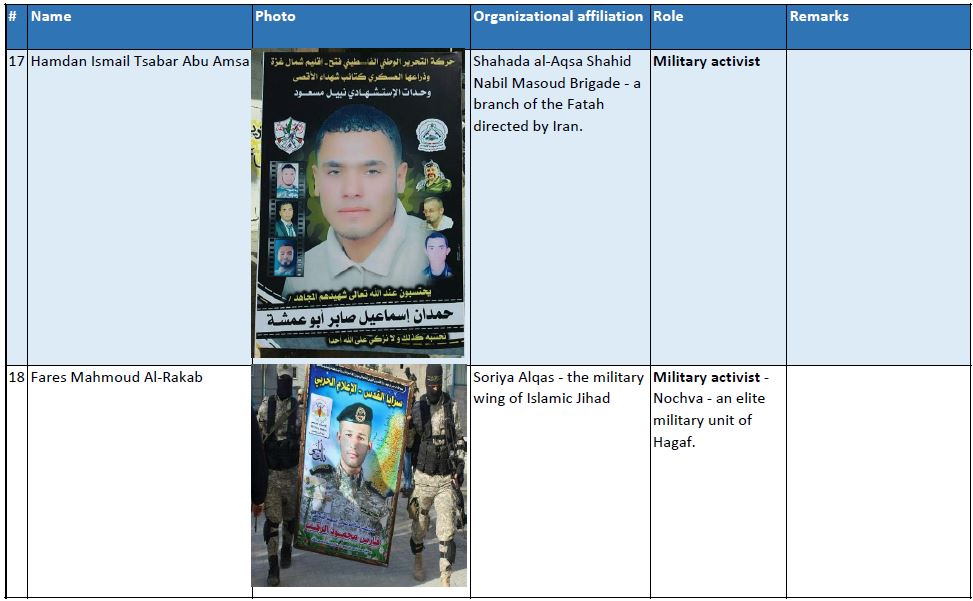 Elder of Ziyon website notes the significance of this documentation:

The percentage of actual fighters and members of terror groups compared to Gaza’s population is quite small. Perhaps there are 20,000 fighters in Gaza out of (supposedly) 2 million people, around 1%.

Israel has done a very poor job of explaining its actions, but the facts show that it is an absolute lie to say that the IDF is indiscriminately shooting at innocent, peaceful protesters.

In order to prevent further deaths, the Palestinians in Gaza don’t need to destroy the environment, they just need to keep Hamas and other terrorists away from the border.

Sounds like Israel needs to be congratulated for good marksmanship.

Burning tires is stupid and desperate – they’re going to find out that it will do far more to choke the protesters from Hamas than it will do to inconvenience IDF forces. I hazard to guess that the IDF was only concerned with stopping those persons who tried to use the confusion to infiltrate across the border, or those who were trying to use or throw some kind of explosive device. They’re still going to have to walk up to the border fence to do that, where they will be visible targets.

Hamas hasn’t spent even 10 seconds thinking through how this is (not!) going to work.

Burning toxic tire fires? Won’t that harm the environment? Won’t that hurt the elderly and children who live nearby?

I am certain the UN, the IPCC, the Obama EPA people (and all the liberal environmentalists) won’t criticize this.

Pollution is only caused by people they don’t like.

You’re probably right but the image of billowing black smoke into the air may be a bit much for even the lost ardent progressive to stomach. Still, anything short of images of wanton abuse of animals will likely get a pass.

This is actually a very good thing: that is, being able to whack these guys at the border.

The Israelis will probably send tanks into the area of the burning tires, later extinguish the flames, then recover the rubber, and turn a profit on it all.

Is it just me because it seems like you can’t swing a dead cat without hitting a dozen terrorists there. They all look like they are posing for their, Osama bin Laden high school year book photos.

I used to wonder, “what is wrong with those people?” Now the answer is obviously, “a lot.”