A repeat during anti-Trump riots of what we saw in Gaza 2014, the misuse of medical facilities and transport. 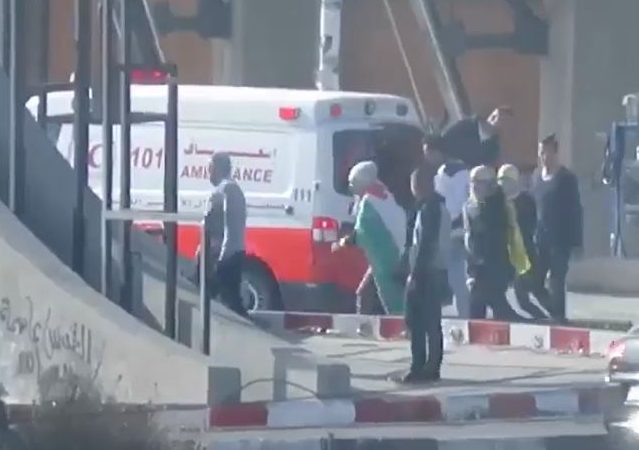 The reaction to Donald Trump’s announcement that the U.S. recognizes Jerusalem as the capital of Israel and plans to move the Embassy has not generated nearly the heat and fury as predicted.

There have been protests and rock throwing, but the numbers of people involved have been surprisingly small in Jerusalem and the West Bank. The most serious incidence was the stabbing of a bus terminal security guard by a Palestinian.

Though the riots have not been as bad as expected, we have seen once again the use of ambulances for terror purposes.

During the 2014 Gaza conflict, the use by Hamas of hospitals and ambulances for military purposes was well documented.

Ambulances also have been used as cover for rock throwers, as this 2011 video shows:

Once again, in protesting Trump’s decision, Palestinians demonstrated an abuse of ambulances. The Times of Israel reports, IDF accuses Palestinians of using ambulance as shield for rock throwing:

The Israel Defense Forces accused Palestinian protesters of using an ambulance as a human shield during a violent demonstration in Ramallah on Saturday.

According to the military, the Palestinian rioters hid behind the ambulance as they believed it would prevent the soldiers from retaliating.

“The rioters knew that security forces in the field would not employ riot dispersal tactics against an ambulance, and they used it to harm the forces while shielding themselves,” the army said in a statement.

Photographs released by the military showed Palestinians on at least two occasions throwing rocks while standing behind an ambulance. The Times of Israel could not independently verify where and when the pictures were taken. 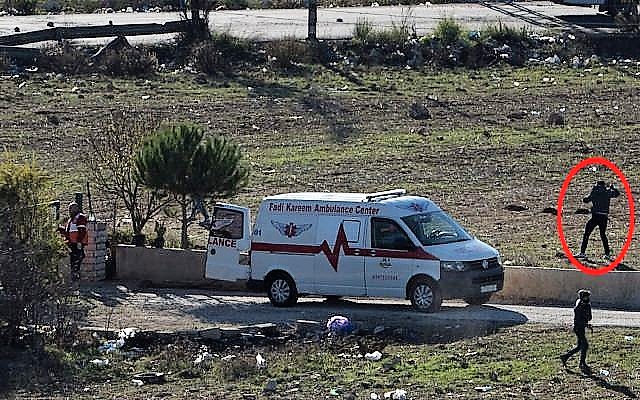 [Palestinian rock thrower uses an ambulance as a shield in Ramallah on December 9, 2017. (Israel Defense Forces)]

In a different location, a Palestinian Red Crescent vehicle was used to transport rioters, as this video released by Israel’s Coordination of Government Activities in the Territories (COGUT) shows:

On its site, the Red Crescent claims "to refrain from participating in all belligerent actions and conflicts"

The Red Crescent is lying, or they have some explaining to do pic.twitter.com/RvSkJs2ulX

Here are screen grabs showing them exiting then heading off to the riot: 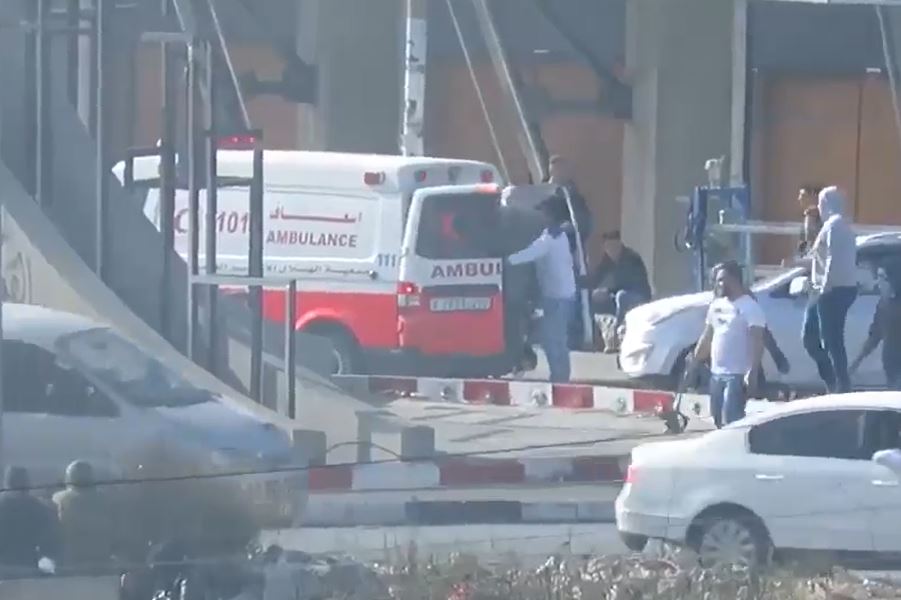 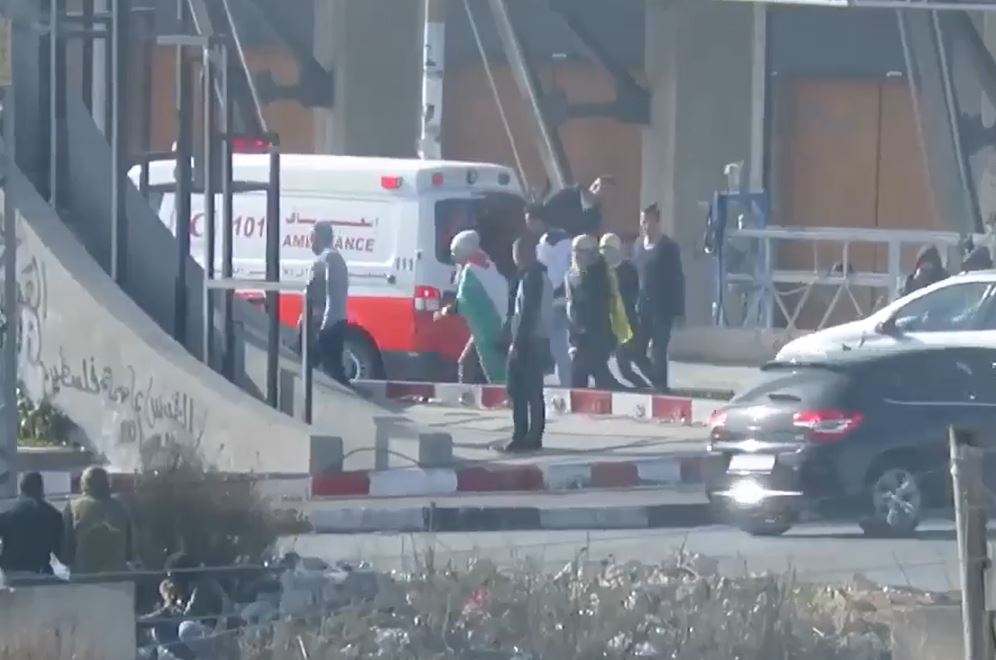 Should have just shot up the ambulance.

Let the locals turn on the terrorists.

THE LOCALS ARE THE TERRORISTS – THERE ARE NO DIFFERENCES –
FAKISTINIANS AMBULANCES ARE JUST PRETEND AND USED FOR KILLING JEWS NOT SAVING LIVES –
LET THEM EAT SHIT AND DIE.

notamemberofanyorganizedpolicital in reply to 4th armored div. | December 11, 2017 at 5:15 pm

Do you think they’re carrying ammo and bombs in those ambulances also?

The Livewire in reply to notamemberofanyorganizedpolicital. | December 12, 2017 at 8:25 am

I beleive they have in the past, yes. Vests and suicide bombers.

When will we ever learn that bad guys from dramatically different cultures don’t play by the same rules as we do. They are zealots; they’ll do ANYTHING to achieve their evil ends.

If we are fighting them with our rules while they use a completely different set of their own rules, then we are doomed to fail.

Take that to the bank.

Wow, someone should report these crimes to the UN….who will undoubtedly press for immediate sanctions….against the Israelis. How evil can they be for forcing the noble Paleostinians into using ambulances for cover. Bad Israel!

Hasn’t this been known since forever? When did they stop using ambulances to transport arms, terrorists, and ammo? This is as surprising as finding they faked a video.

In some ways I blame Israel for this. Had they fought strictly in accordance with the Law Of Armed Conflict (LOAC) the terrorists wouldn’t be able to get away with this.

The first basic principle of the LOAC is distinction. The belligerents have to make a distinction between themselves, legitimate military objectives, and civil objects which can not be targeted. But if the terrorists use hospitals, schools, mosques, etc. as weapons depots, firing positions, and command and control centers they make distinction impossible.

So every single casualty that results from their use of civil objects as cover is a war crime and they, not the opposing belligerent, are responsible.

But we, the US, are the real culprit. We created the UN and therefore the conditions for hostile countries to have veto power over others. They want one side to lose (Israel, the US) and they hide behind “humanitarian” language in order to bring that about.

It’s the same problem with coalition warfare. Despite his faults, “Dug Out Doug” understood this (he actually wasn’t the coward that nickname implies, he demonstrated that in WWI, but he had plenty of other faults). MacArthur was going to be the Supreme Allied Commander for the invasion of Japan. He understood that if you want to win a war you keep the coalition as small as possible. He wanted only US and ANZAC forces; they had fought their way across the Pacific and up through New Guinea and the Philippines together and were a well oiled machine. When the Canadians pressed to be involved (Canada had the largest military per capita in the world in WWII) he relented. They had trained with the US to US standards and were fully interoperable. But he refused to allow British forces to be involved. And he said hell no to the Soviet “offer” as there was no way they could operate with the other forces. And he recognized them for what they were; a hostile force that only wanted to divide up Japan so it could carve out its own sphere of influence.

But now we revel in how large our coalitions are, as if that’s a sign of anything other than our own stupidity. What was the point of having countries like Syria involved in the first Gulf War? Ostensibly it was to lend legitimacy to our launching an invasion from one Muslim country into an occupied Muslim country to drive out a third Muslim country’s occupying army.

But George H.W. Bush gave the game away when he was asked why he didn’t pursue the retreating Iraqi army into Iraq. Because, he said, the coalition would have fallen apart.

Hello!! That was the only reason countries like Syria got involved. To tie our hands. So we were left squatting in the desert for another 12 years letting Saddam Hussein build on the army WE LEFT INTACT and rich on violating sanctions the world wouldn’t let us enforce because, think of the children!

Will we ever grow a &%[email protected] brain? We need to smash all those stupid vanity items that we foisted on the world stemming from our creation of the UN that sprang up all over the place lie a fungal infection, that only serves to pay anti-Western mostly third world lawyers to sit around and think up ways to sabotage us, and start over.

As I said on another thread, there used to be a time when groups like the PLO (now the ludicrously named “Palestinian Authority”) would never have gone near the ICC. Because they know everything they do, including using ambulances as military transport, is a war crime. But now that they’ve learned all those international institutions that were spawned by our original mistake, the UN, exist to hate us and help them, they’ve joined the ICC in order to charge Israeli officials with war crimes.

The ICC will have to invent a new category of “war crimes” to accomplish this as the existing categories only condemn the Arabs. But I’m sure the ICC is up to the task.