An Obama Talisman, “Liberal Prepping,” and a News “Blockade” 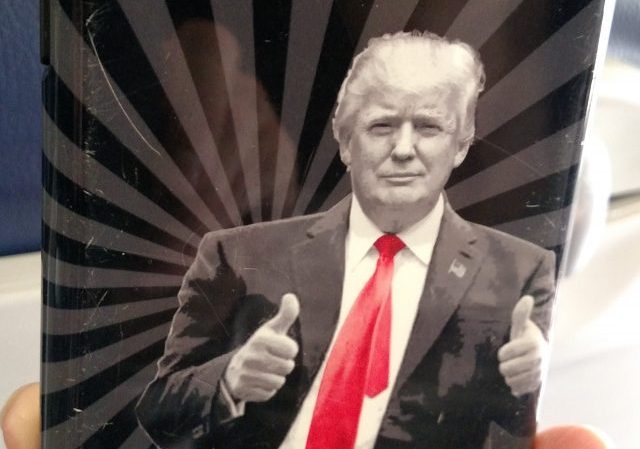 Since President Trump’s election, the left has morphed into a bizarre mixture of fascist groups “against fascism,” free speech groups that fanatically shut-down speech with which they disagree, and pro-illegal immigrant groups that ignore DACA.  Among all this counterintuitive bluster are the anti-Trump leftists who have taken their Trump Derangement Syndrome to brand-new levels of cringe-worthy derangement.

Remember when model Chrissy Teigen attributed her unhinged mental state to President Trump and demanded he pay for her botox and anxiety meds?

Teigen is not alone in her need for psychological and emotional support for the trauma of the Trump presidency.  Apparently, lefties are not only boozing it up in an effort to numb their pain but are also flocking to “cuddle parties” to “safely” cuddle with complete strangers . . . and to pay $80 for the privilege.

Those who don’t find comfort in the bottle or in the arms of strangers have taken to prepping for the “Trumpocalypse.”

They’re buying more guns and ammo, practicing at firing ranges, learning how to purify water, grow food, and . . . planning how to colonize Mars, debating whether to stock up on recycled toilet paper or to buy Angel Soft from the dreaded Koch brothers, and purchasing “survivalist chic” bug-out kits that include luxury chocolates and expensive face and hair care products (custom monograms available, but these cost extra).

Not every post-2016 traumatized leftie is a “liberal prepper.”  In fact, the executive editor at the New York Times carries an Obama talisman in her purse, presumably to ward off Trump “cooties.”

Writing at the Guardian, Jill Abramson, daydreams about an alternate reality in which a Democrat “blue wave” hits Texas hard.  This was after the Democrat’s abysmal showing in last Tuesday’s Texas primaries.

It’s thrilling to see signs of a Trump rebellion – it could lead to winning control of the House, and maybe the 2020 election.

. . . . Though their optimism may be premature, national Democrats think Ted Cruz can be defeated in November by a well-funded liberal House member from El Paso with the name of Beto O’Rourke, who just won his state’s Democratic Senate nomination.

. . . .  Besides Cruz’s personal unpopularity, there is Trump’s unpopularity affecting the mood in Texas. According to the Washington Post, Gallup’s 2017 year-long average found Trump’s job approval rating at 39% among Texas adults.

Of course, there are months to go until November and Beto has to be considered an underdog. Still, it’s thrilling to see signs of a Trump rebellion building in the Solid South, the Republican base where religion, racism and love of guns have advantaged Republicans since Richard Nixon’s election in 1968.

Trump rebellion? Her “well-funded liberal House member from El Paso with the name of Beto O’Rourke” is a joke, and Texans, while having a healthy sense of humor, are unlikely to vote for a pro-amnesty, anti-Second Amendment, pro-abortion joke over a proven Senator who “gets” Texas . . . and America.

It’s easy to look at what’s happening in Washington DC and despair. That’s why I carry a little plastic Obama doll in my purse. I pull him out every now and then to remind myself that the United States had a progressive, African American president until very recently. Some people find this strange, but you have to take comfort where you can find it in Donald Trump’s America.

That’s bizarre, right?  By any normal standard of behavior, carrying a plastic talisman of a former president in your purse is . . . weird.  This is beyond “normal” eccentric behavior and way into deeply weird territory.

With this “I carry a plastic Obama doll wherever I go” stuff, I thought I’d heard it all.

That is until the prof sent me this link about an anti-Trump leftist so traumatized by Trump’s election that he bought a farm in Ohio, shut himself off from all news, and worked on wood projects in complete ignorance of all that is going on in the country.  This 53-year-old, a life-long bachelor (no wonder!), decided that the best approach to the Trump presidency was to disconnect totally from the news in some sort of resistance to (unhealthy denial of?) the Trump presidency.

Well . . .  having shut himself off from all news and current events, he did somehow manage to get the New York Times to go to Ohio (this is no easy feat outside a presidential election year; the NYT is notoriously uninterested in flyover country during “off” years).

This guy sounds like someone peddling a book, hoping his Howard Hughes’ approach to the Trump germ will translate into millions of dollars in book sales.  This seems unlikely.  This piece is so mind-numbingly boring that either the NYT writer is singularly lacking in talent or this guy is boring to the bone (or sounds so nuts that the Times writer didn’t want to take any chances by revealing it).

The left is not dealing well with the Trump presidency.  Indeed, they seem to be reverting to an infantile state during which cuddling, fantasy, doll talismans, and cultural isolation are a win.

I dropped an Obama doll this morning

Please tell me you didn’t play with it.

He didn’t have enough to make a Schumer

Can Liberals survive the apocalypse? Hope not.

On Fox news Sunday today, when asked about taking a genetic test, Elizabeth Warren in a nutshell said that she identifies as Native American based on family lore so end of discussion.

I think there’s no chance she hasn’t already submitted her spit to 23 and me or some other such site. And she already knows her closest connection to a Native American was when she met some while living in Oklahoma. If she had a positive result, she would have been shouting about it from the rooftops.

Agree. My money says she’s already taken the test under various false names, at different testing labs. Each one coming up snake eyes.

If any test result had been good for her phony assertion of being a native Indian we would have heard about it. Endlessly.

Like with the One and his SATs, his LSATs, his college grades. If they had been even just decent, we would have heard about his incredible brilliance. But not a peep. Meaning he’s a flunkie who’s been coasting through life on AA. His wife’s done the same.

notamemberofanyorganizedpolicital in reply to Humphrey's Executor. | March 12, 2018 at 2:47 pm

Based on that, Lizzie Borden….er…Warren can also identify as Martian.

I used to watch The Daily Show long time ago and I was surprised that they finding ways to be way un-funnier. Every “prepper” on that clip was fake; these are obviously actors playing an stereotype. It must be nice to be a liberal “comedian”…they don’t even have to be funny…

Aw, I thought it was funny since it really hit the stereotypes hard. I giggled quite a few times watching it. My favorite was the katana schtick. “bang.” Too funny.

Just wait until the Trumpslide2020…Abramson will be clutching the Obama talisman whilst curled into a fetal position.

I am a firm believer the the utility of having a loyal opposition, and I have been hoping to see Democratic voters do some housecleaning, so that the party can be an effective voice for their constituents’ point of view.

Instead, the party leaders and their captive nation media continue with their bone-headed, over-the-top, obviously faked slander of the US President and every one of the people who voted for him.

This entire game of “can you top this” with respect to demonstrations of the degree of psychological damage suffered by adult Americans due to the outcome of an election is beyond stupid. These people are not suffering: they are writing trivial excuses for their party’s failure to get down to business.

A water filter straw? Minimum one gallon of water per person per day. How’s that work in SF? People are kidding themselves.

Talismans? And the same people mock us for our ‘pagan’ Christmas trees and Easter egg hunts? Bloody scold they are.

As a kid I did carry a talisman. It was a rabbits foot with keychain loop. Funny thing? I didn’t have any keys. Epic fail!

“Since President Trump’s election, the left has morphed into a bizarre mixture of fascist groups “against fascism…”

Dear Leftists,
Since you won’t respect the results of the elections anyway, why should we have them?

Dear Leftists,
Since you won’t respect the results of the elections anyway, why should we have them?

Don’t care. The picture of Hillary signing books at Costco is enough to see me through any crisis.

Of note is the fact that even if she did test positive to being a native american, that still wouldn’t help her.

The definition to claim to be a native american for reporting purposes is that one must identify as a particular member of a tribe and be active in that community.

Since she has consistently refused to do so over the years, she can’t claim to be under the “LEGAL” definition.

And this is why she’s trying to smother the claim to death.

I don’t think the Cherokees are going to let her do so.

I disagree that they are reverting to an infantile state because that assumes they left one in the first place.

The Daily Show piece was actually pretty spot on. They don’t prep because they think that they can just come over to my place, or someone from .gov will show up to help. If you want to traumatize them permanently, show them the unedited 2011 tohoku footage. That is when they realize that the only 911 available that day will be them. Sure, some liberals might survive by starting prep properly, but in the process of changing, they might not end up being liberal.

Dogs that have serious medical problems usually get put down to end their suffering.