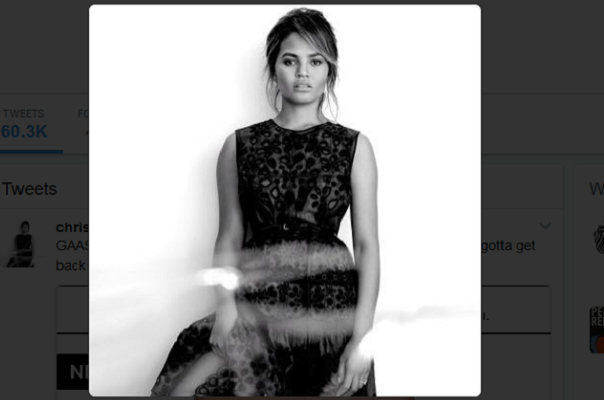 Apparently, Chrissy Teigen’s mental and emotional state is deteriorating, and she blames it all on the president . . . and wants him to foot the bill for her botox and anxiety meds.

Model Chrissy Teigen says President Trump’s behavior is causing her to up her medication and she wants him to pay for it.

The 31-year-old model and wife of musician John Legend went on a Twitter tirade Wednesday evening, revealing she had a tooth shaved down due to “crippling anxiety” as a result of Trump.

“So fucking tired of this manically insane, incompetent president and this dumpster fire administration I’m gonna have to go on another med,” Teigen tweeted, later adding, “that is not a joke. I think I need to either up my dosage or talk to my doctor to ‘see what works for me’ when the world explodes.”

. . . .  She also revealed that she has received botox injections in her jaw to relieve muscle tension, in her demand that “POS POTUS” pay her medical bills.

My dear, have you considered suicide?

Key up the theme song for MASH…..

She’s this “debilitated” after only a hundred days of Trump? What a fragile cupcake.

Survival of the fittest, baby. Obviously you don’t qualify.

Pretty girl. Dumb as a sack o’ rocks, though.

And with a very unattractive case of Potty Mouth! Although her leftist-cupcake friends will probably admire her for calling the President of the United States of America a “piece of sh!t”.

By the way, I believe you just insulted that sack of rocks!