West Virginia’s prognosticating pundit Don Surber offers the first in what is likely to be his 8-edition series! 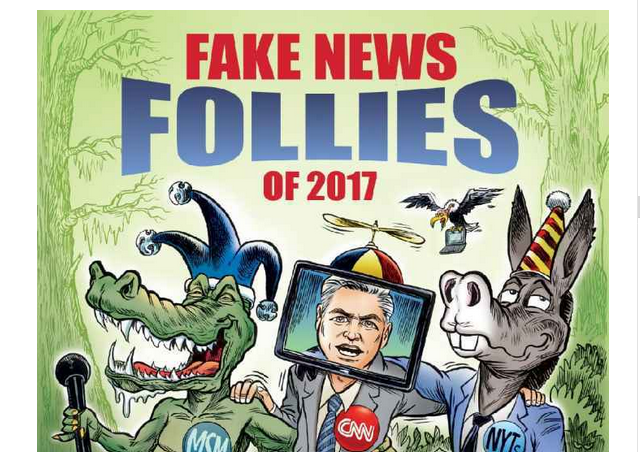 Surber, a recovering journalist with over 30 years of experience, has been cataloging the #FakeNews that has been regularly offered as serious analysis of President Donald Trump’s actions, policies, and opinions. He has brought his enormous collection together in the longest, most serious book he has yet written: Fake News Follies 2017.

Surber’s detailed look at the continuing media meltdown over Trump’s victory begins with the definition of “Fake News”.

In 2017, the media and Democratic Party officials defined Fake News as websites that look like news sites but disseminate information that is false or misleading. They included satirical sites.

President Trump and his supporters defined Fake News as news organizations that deliberately disseminated false stories. They did not include satirical sites. I define Fake News as the fog of war.

In 2017, much of the political media chose to go to war with Donald John Trump. They did not choose wisely.

Surber’s clarity and wit make the study of the media’s blatant misrepresentations engaging and informative. He hits many #FakeNews gems that have been nearly forgotten the the avalanche of more recent, specious coverage of the memo release and immigration battle.

Some chestnuts that he dusted off include:

One, particularly fascinating aspect of Fake News Follies 2017 is the background of Jeff Zucker, the President of CNN. Surber deftly details why Zucker has had his team focus the destruction of President Trump…when they aren’t wondering about black holes.

I suspect CNN will remain a leading source of Surber’s upcoming editions of Fake News Follies.

In conclusion: If you like a great, informative read that offers hard data blended in with crisp analysis, Surber’s book is a must-have. For those of us who follow the American press, it will be a wonderful reference to own.

I can’t believe how much #FakeNews I had already forgotten!

I have my own nickname for the so-called “news” these days. MOOD. Manufactured Outrage Of the Day. If I didn’t have a full time job and 3 children, I’d start a blog to chronicle it all. So many angles left unexplored in the echo chamber.

The media has become the propaganda wing of the Democratic Socialist Party. They have become so invested in pushing Democrats to power that they have lost almost all objectivity. And many who are in the media don’t see it. They are surrounded by like thinking individuals, and only hear opposition to their views and almost religious like beliefs when those in the party they hate speak. Their first reaction is they are liars and bigots and all the rest of the normal mantra of negative labels they throw out.

A number of them feel they are being honest, and unbiased, all because of their bubble world. They feel justified in editorializing news pieces because they believe they have superior reasoning and intelligence, their views are infallible so you must listen. They even bend over backwards to justify falsehoods reported because they “know” its true even if they can’t prove it.

I have never seen this level of insanity in a group of people before. They are truly deranged over Trump beating Hillary and cannot accept it. The insanity started with Bush and has increased over these years to where it is today.

The democrat media has become the Soviet Pravda.

No doubt these people have emotional issues, but they are very, very dangerous: they’ll do anything, say anything, destroy anything or anyone to get power.

Hillary klinton is the potentially one of the worst despots in western history. While she has deranged ambition and is a complete sociopath, she is also too talentless to achieve her sick dreams. Obama is just as sick, but more telegenic, though just as talentless. Thank God.

Hillary klinton is no less a purveyor of hate than obama, or any other demagogue.

The left likes to mock comparisons of leftist demagogues to adolph hitler, and the reason is because it hits too close to home. (pre-Nazi Germany was a western style democracy with great roots to American citizens. It had a free press. All events were well-documented in newspapers as well as books written at the time. West German also had a free press post-war: thus, ALL events and circumstances leading to hitler’s rise to power and the autopsy after the war were well documented, unlike events in Tsarist Russia and the resulting Soviet-governed Russia after the revolution.)

hillary klinton is a hitler wanna-be, desperately so. Bill Klinton is quieter, and less dangerous, though equally corrupt.

It’d be no surprise if it is discovered klinton takes a lot of her playbook from hitler’s writings and found solace and encouragement from rise from his many set-backs prior to his gaining power in Germany.

This woman needs to be prosecuted for her many crimes and treason, instead of allowing her show the world what she can get away with, continuing to mock the justice system and our country, and spreading poison to the gullible, the useful idiot and the young.