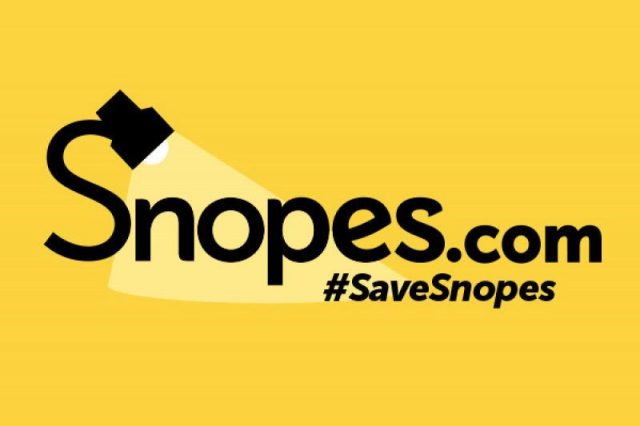 One of Facebook’s official arbiters in the battle against ‘fake news’ is on the brink of financial collapse.

The site, which long-served as the internet’s best source for debunking myth and urban legend started an online fundraising campaign with GoFundMe earlier this week, with the hope of raising $500,000.

Founder David Mikkelson explained on the GoFundMe page, that their recent financial hardship is due to contract dispute with one of the site’s vendors. Mikkelson claims the vendor is holding site resources hostage:

We had previously contracted with an outside vendor to provide certain services for Snopes.com. That contractual relationship ended earlier this year, but the vendor will not acknowledge the change in contractual status and continues to essentially hold the Snopes.com web site hostage. Although we maintain editorial control (for now), the vendor will not relinquish the site’s hosting to our control, so we cannot modify the site, develop it, or — most crucially — place advertising on it. The vendor continues to insert their own ads and has been withholding the advertising revenue from us.

Our legal team is fighting hard for us, but, having been cut off from all revenue, we are facing the prospect of having no financial means to continue operating the site and paying our staff (not to mention covering our legal fees) in the meanwhile.

But Proper Media insists that Mikkelson’s personal spending and mismanagement is to blame for Snopes’s money woes.

In legal papers filed in San Diego Superior Court, they say: ‘But while Snopes is built entirely around the concepts of transparency and truth, its founder, Defendant David Mikkelson (‘Mikkelson’) has engaged in a lengthy scheme of concealment and subterfuge to gain control of the company and to drain its profits.’

The company says Mikkelson unilaterally broke the advertising contract earlier this year and has bristled at shareholder efforts to rein in his spending.

They note that even as Mikkelson claimed to be under financial duress in court filings in June, he signed the documents while on a trip to Orleans, France.

‘If Mikkelson is permitted to continue unabated as a director of Bardav, he will irreversibly drain the company of important financial resources through personal and unnecessary expenditures,’ said Proper Media in the lawsuit.

The company also claims Mikkelson carried out ‘pervasive fraud’ at Snopes and used the accounts to pay for lavish trips and personal items while refusing requests from shareholders to examine his expenditures.

According to the lawsuit, Mikkelson spent ‘tens of thousands of dollars’ from the company on legal fees for his acrimonious divorce from Barbara last year, a drawn-out battle that included disputes over Mikkelson’s salary and alleged spending on prostitutes.

Court documents from their divorce and its aftermath revealed that he wanted to be paid $720,000 a year.

He is also accused of spending ‘tens of thousands of dollars’ on personal trips, including a honeymoon with his new wife to Tokyo Disneyland.

In December, Mikkelson “was accused of embezzling nearly $100,000 in company funds to spend on personal expenses and prostitutes” when Mikkelson and his now ex-wife were going through a nasty divorce. His ex-wife Barabara reportedly requested Mikkelson’s suspension from company bank accounts, fearing he’d bleed them dry.

According to The San Diego Reader, Mikkelson carefully denies embezzlement claims, saying he did not use company funds improperly before he married his new wife/escort:

“I did not ’embezzle’ or use any company funds to pay [Young] before we were married and before she was officially hired at Snopes.com,” Mikkelson says in an interview. “[She] has long worked on behalf of Snopes.com, first as an unpaid volunteer and then as a full-time employee, and it’s only within the last year that she started to receive an actual salary.”

Mikkelson claims his request for a raise was a “package deal” with only a portion of it being salary, and that the parties filing suit are attempting to “obfuscate matters and stir up outrage by confusing salary with compensation.

“Using the number of articles published by the site per day is a ridiculous metric for measuring success. It only goes to show how much Schoentrup and Richmond are disconnected from the actual operations of this company. I successfully managed every aspect of this web site on my own for 21 years before Proper Media came along, and now that we’ve grown to a staff of 16 people, we’re more than capable of getting along without them.”

And about that 355 percent raise, Mikkelson says that the payment was a package deal. Only a small portion of the $1.118 million was for his salary.

“The claim is a deliberate attempt to obfuscate matters and stir up outrage by confusing salary with compensation. The overall amount I received last year included my salary for running the company, money the company earned before they bought into it, as well as profit distributions to shareholders. And this amount was not some number that I pulled out of the air, but was in fact based on an analysis performed by a leading compensation expert.”

Snopes once served as the Internet’s go-to spot for facts, remaining almost completely unbiased. But in recent years, Snopes ventured into fact-checking and has managed to discredit itself among right-leaning news consumers as just another purveyor of political bias, barely distinguishable from Politifact.

It appears Snopes’ fall from grace is still far from over.

Sadly? Sadly??? There is nothing sad about this!

notamemberofanyorganizedpolicital in reply to Wisewerds. | July 28, 2017 at 2:50 pm

So right – no sad thing about this.

Facist Book and some other new-age, internet, and media monopolies need to be broken up as badly as Rockefeller’s Standard Oil needed it.

Ragspierre in reply to notamemberofanyorganizedpolicital. | July 28, 2017 at 9:46 pm

Rockafella’s company was never a “monopoly”. It WAS a very well-run, fiercely competitive entrepreneurial venture.

Read “The Myth Of The Robber Barons”. You’ll learn something.

Yikes. But I bet if you look this up on Snopes.com they’ll say it’s false.

Wherever will the Left validate “facts?”

The right doesn’t even try. Whatever best fits a preconceived belief the the one to quote.

I just checked on Snopes.com and according to them this story is 100% false.

The recent article on Zerohedge incorporated materials from elsewhere that tend to indicate the kooky leftist David married a prostitute. For people with inquiring minds:

Not a prostitute. Please. Give credit where credit is due. She’s an “escort.”

He stole some money an spent it on congress?

According to the GoFundMe page they raised $667,000 in four days.

With a staff of 16 and a CEO that gets paid $700K+ and has an appetite for expensive hookers… they’ll burn through that in 2-3 months.

Sounds like a typical Trump lawsuit. After the 2008 financial debacle, he tried to cancel a loan agreement by claiming ‘force majeure’. According to the lawsuit: No one could have foreseen the crisis. Of course, he was simultaneously running Trump U and telling his students (marks) that he knew exactly how the market worked.

Hey YellowStain, HuffPo called and said for you to get back to work on that Hillary Butt Kiss article you’re writing.

Snopes was never a source for debunking anything. Couple of nutball lefties = Snopes.

You are either lying, or so profoundly ignorant that you should keep your mouth shut at all times. Snopes has for over 25 years been the most respected and reliable source for fact-checking suspicious stories doing the email rounds. On political subjects it had a slight but noticeable bias to the moderate left, but this didn’t get in the way of facts; it showed itself in the assignment of the benefit of doubt, in the choice of which version of a story to check, and in which stories to check in the first place. Only in the last few years, as they hired new writers, has this bias on political subjects got more pronounced; on non-political subjects it remains generally reliable.

“…you should keep your mouth shut at all times…”

In any event, we caught Snopes lying many times. They were not the paragon of truth you claim they are.

Snopes is universally respected. You are not. That is a simple fact. Snopes’ reputation for honesty was hard-earned; it’s been a pity, over the last few years, to see it squandered, at least on political topics. On non-political topics it remains the most reputable and reliable source on the net, and anyone who claims otherwise automatically beclowns himself.

Oh, Milhouse, you can say some of the funniest things!

I say the truth that everyone who didn’t come down in yesterday’s rain already knows.

Is there anything dumber and shouts out loser, than marrying an escort? I wonder if he got a prenup? Does the money people send him go to him or directly to the escort?

One ho marrying another. What’s so surprising?

Yes, it sounds like her new business is like her old business.
Lots of ups and downs.

Nothing can make a man do really, really stupid things like a woman.

Ewww…NASTY! Hanging out with prostitutes 50 years ago might have been ‘cool’ thing for reprobates to do, but today???

Forget about the ‘moral’ issues, just focus on the health issues. Gonorrhea, syphilis, chlamydia all with variants that are immune to any treatment, along with Hiv/AIDS and any other blood born disease! Imagine kissing some woman who makes their living in the sex trades…yuck! I can read the obituary now; “Died because his breathing passage was blocked with genital warts!”