Will Sen. Joe Manchin be tapped as the new Energy Secretary?

Will Sen. Joe Manchin be tapped as the new Energy Secretary?

Trump may reschuffle the deck to get another GOP senate vote. 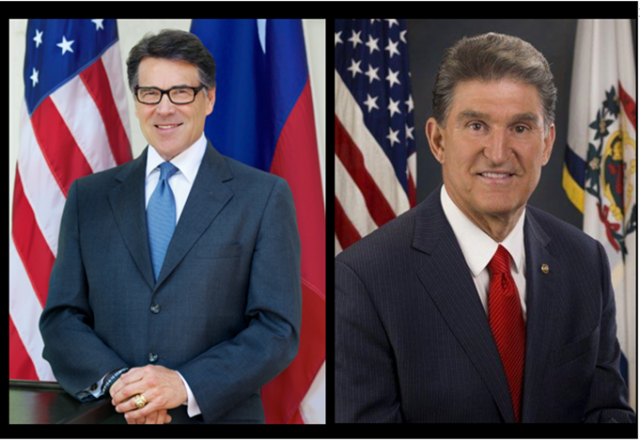 President Trump is clearly unhappy with the US Senate’s lack of legislative progress on the repeal of Obamacare.

After three maverick senators shot down a key repeal vote, Trump may now resolve this political problem using an intriguing “Art of the Deal” technique: Reshuffling the deck.

Sen. Joe Manchin (D., W. Va.) has been rumored to be President Donald Trump’s pick to lead the Department of Energy in order to free up his Senate seat.

Conveniently for the former Texas governor, a critical spot has just opened up on Trump’s cabinet.

It appears that Perry would likely accept this reassignment.

Sources close to Trump’s energy transition team told the Washington Examiner that Perry’s selection for homeland security is credible because the Energy Department was never Perry’s first choice. He had wanted a post in the Department of Defense. The thinking now within the administration is that Perry may be up for homeland security as a compromise between the two, since the security post is closer to a defense position than energy secretary. But no one is sure exactly how this will shake out.

Recently, Manchin cause quite a stir when he said he didn’t care about reelection.

Sen. Joe Manchin (D-W.Va.) is ripping into critics who want him to fully commit to Democratic policy points, saying he won’t be pressured into taking stances he disagrees with just to win an election.

“I’m not scared of an election, let’s put it that way. Elections do not bother me or scare me,” he said. “I’m going to continue to do the same thing I’ve always done, extremely independent.”

While he might not care about reelection, fellow West Virginian Don Surber offers some insight into Manchin’s motivation to accept the deal:

Manchin’s chances of re-election next year are slim.

Bob Byrd could weather the storm, but Manchin is no Bob Byrd. He lost the Democratic Party nomination for governor to Charlotte Pritt in 1996.

For Manchin, energy secretary will help his portfolio.

For Justice, appointing a Republican will ingratiate him to his new party, which he tried to humiliate during the state budget process.

It would be epic to see the new West Virginia senator cast the final vote to repeal Obamacare.

The Dem Hive (or Hornet’s nest) will never let that happen. They will do everything they can to leverage Manchin into staying put. He probably would anyways because he voted against repeal.

Jim Justice, who recently changed party affiliations and became a Republican, so that a Republican can fill Manchin’s seat in order to vote for a repeal of Obamacare…

I was just thinking about that. I wouldn’t put it past democrats to pretend to be switching sides and then turn around and just put another democrat in Manchin’s seat. No harm done anyway, the seat will stay democrat. Better to persuade Manchin to switch to the GOP.

“While he might not care about reelection, fellow West Virginian Don Surber offers some insight into Manchin’s motivation to accept the deal:

Manchin’s chances of re-election next year are slim.” Etc.

This assumes that Manchin fears losing his seat. A big problem in recent years has been the back-channels available to former office-holders to receive payoffs: book deals, lucrative lobbying jobs, etc.

With these opportunities, losing office no longer holds the sting it once did. Combined with the probable threats Manchin is receiving from other Democrats, it’s easy to believe that he’ll refuse this deal even if he’s SURE he’ll lose his seat.

It’s not like it’s a secret what Trump is trying here.

His daughter is the CEO of Mylan the provider of overpriced Epi-Pens that Manchin’s wife lobbied to require purchase of said Epi-pens……for the children. Eleven (11) states signed on.

That will come up during a campaign. Particularly during the “healthcare” part of a Senate debate.

Toss in West Virginia’s Trump/Republican led energy rebirth and the right will eat him alive if he runs again without changing parties.

We could add 10 new GOP Senate seats. If they are the Collins / Murkowski / McCain / Graham type, it will accomplish nothing.

Let us say that Manchin switches sides. Keep in mind that in Arizona, by law, the governor has to appoint someone of the same party as whoever he is replacing. You can bet whatever intimate body part that you want that John McCain will switch to Democrat before he dies/resigns prior to dying. That counters the Manchin switch. And it would not be surprising if Murkowski and Collins did the same. And there are a significant number of “Republican-Democrats” who would not mind becoming formal “Democrat-Democrats”.

Still, I am in favor of the switch, because it would quickly prove to all that the Republicans really are not any sort of opposition to the Democrats and encourage the creation of a SECOND party.

I’m just sitting here thinking that it’s a real shame that old tradition of caning Senators went out of style.

McCain switching wouldn’t balance Manchin’s Republican replacement as it pertains to Obamacare repeal. McCain votes no in either party, but Manchin’s replacement would vote yes, thus getting to a 50-50 tie, which Pence breaks. Obamacare Repealed!!!