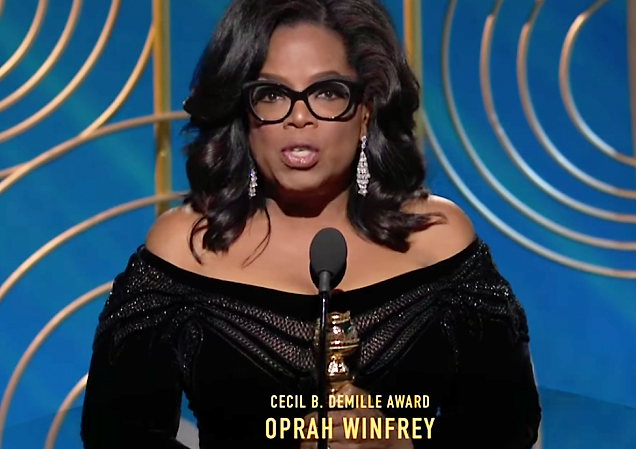 Sorry, Democrats, but as it stands now, Oprah says she’s not interested in relocating to D.C.

Oprah’s rousing speech at this year’s Golden Globe Awards had the entire internet abuzz (mainly Democrats) with the hope the talk show hostess might challenge Trump in 2020. A Draft Oprah group was created, and pollsters and pundits took the wish-casting seriously.

According to CBS News, Oprah doesn’t think she has “the DNA for” a presidential run.

“I’ve always felt very secure and confident with myself in knowing what I could do and what I could not. And so it’s not something that interests me. I don’t have the DNA for it,” Oprah told InStyle’s editor-in-chief Laura Brown in an interview for their March cover story. The interview was conducted three weeks before Winfrey had received the Cecile B. DeMille award where she gave the stirring speech.

“Gayle sends me these things, and then she’ll go, ‘I know, I know, I know! It wouldn’t be good for you—it would be good for everyone else.’ I met with someone the other day who said that they would help me with a campaign. That’s not for me,” Winfrey added.

While King insisted on CBS that Winfrey is not “actively considering” a run for president, she also said, “She loves this country and would like to be of service in some way.”

As Oprah tells it, “the depth of our human experiences” is her calling.

As for Winfrey’s role as a special correspondent with “60 Minutes”, she says it’s her “calling.”

“I have to say the core of me is about conversations. Exploring the depth of our human experiences. That is what I do. That is my calling. Whether I do that through dramas, producing stories with OWN [Oprah Winfrey Network], or one-on-one conversations that matter, I know that’s what I’m here to do,” said Winfrey.

And that’s fine by me.

notamemberofanyorganizedpolicital in reply to Matt_SE. | January 26, 2018 at 6:50 pm

Honestly, that is a very racist crack!!!!!

I understand that the secret service has advised her not to run, since when she stumbles and passes out as Hillary did, there wouldn’t be enough agents available to pick her up and throw her in the back of the suv.

Though she could have used moooochelle obama’s White House plane, Air Force Ton.

Oprah knew she’d be in over her head, in campaigning, and the job.

Good thing. Those eyeglass frames are a serious violation of Presidential norms.

notamemberofanyorganizedpolicital in reply to Firewatch. | January 26, 2018 at 8:52 pm

It’ll be a do-it-yourself Yugo made of tuna fish…….

Right now Oprah is the queen, or possibly empress, of a business empire which is totally dependent upon the image which Oprah projects. If she ran for President, op research would very likely find a number of things which would tarnish that image. After all, she is only human, the last I looked. And we all have skeletons in our closets. It simply would not be worth it to take the chance on harming her business empire for a job that she really does not want.

Interesting qualifier from her spokescreature. Oprah is not averse to selfless service for America, but serving as POTUS would be too much of a sacrifice for her.

I can actually respect that. There’s a recognition at the office is a duty not a prize. I sure as hell wouldn’t do it. You age 20 years in 4.

OTOH, Oprah is a fiction created for daytime viewers. It might not survive first contact with reality.

“She loves this country and would like to be of service in some way.”

I think we have had enough of Oprah’s service with what we had for the last 8 years, aiding and abetting the cult of Obama. 🙂

I’m not sure that an Oprah candidacy would really work. I think Chairman O has maxed out the Race Card for all who follow and seek to blame the people who owned slaves 150 years ago, or the Democrat KKK and Jim Crow types that tried to keep the black people in their “place”. The country may not survive another term or two of a pseudo socialist. There are not enough wealth creators willing to pay through the nose for an overly large welfare state.