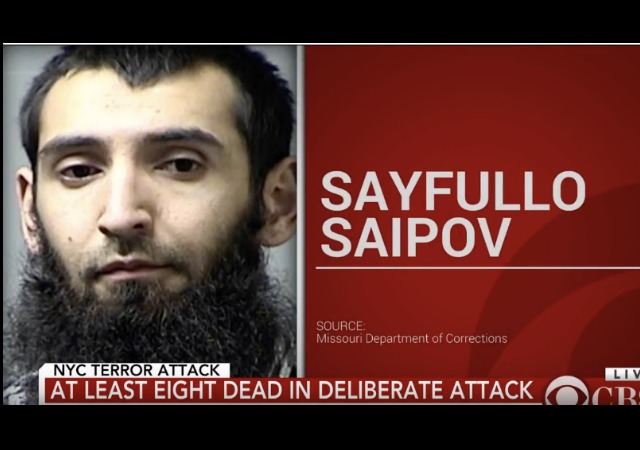 Sayfullo Saipov, 29, killed eight people and injured 11 on Monday in Lower Manhattan when he plowed a rental pickup truck into a crowd of people. He screamed “Allahu Akbar!” after he exited the truck and police confronted him. An officer shot Saipov and took him into custody. They transported him to a hospital and he’s recovering from surgery.

Authorities found Saipov’s notes near the truck, in which he declared he carried out the attack for the terrorist group the Islamic State (ISIS).

Saipov arrived from Uzbekistan in 2010 at JFK airport. He received a green card from the “government program called the Diversity Visa Lottery, which hands out about 55,000 visas per year.” He first lived in Ohio and then moved to Tampa, FL. He has been living in Paterson, NJ, with his wife and three children for many years.

ABC News reported that Saipov has business licenses for two Ohio-based trucking companies.” He worked as an Uber driver and the company claimed he passed all the background checks.

Authorities revealed that Saipov appeared “in prior counterterror investigations as a ‘possible associate’ of a suspect, but he was not the focus and there was never any proof to open a case file on him so he was not under surveillance.”

The NYPD has kept the mosque in New Jersey that Saipov allegedly attended under surveillance since 2015. From Fox News:

The Omar Mosque in Paterson, N.J., located near Saipov’s home, is among multiple Muslim houses of worship in the New York metro area being studied by the NYPD as possible locations for “budding terrorist conspiracies,” NorthJersey.com reported.

An NYPD report from 2006 doesn’t link any criminal activity to the mosque, but says it “is believed to have been the subject of federal investigations.”

In the wake of Tuesday’s deadly truck attack in Lower Manhattan, police and the FBI swarmed areas in New Jersey to which Saipov was believed to have ties. They included the mosque, an apartment building, and other residences and storefronts. 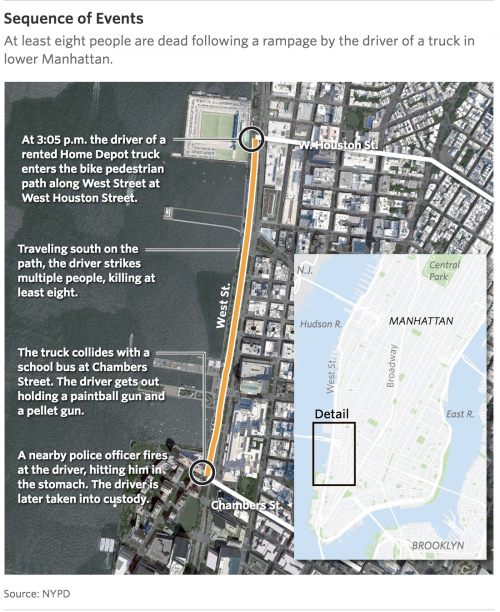 Saipov used a tactic that terrorists around the world have been embracing for the last few years: vehicle ramming. From The Wall Street Journal:

The terror unfolded shortly after 3 p.m., when the suspect drove a flatbed pickup truck rented from Home Depot for nearly a mile along a picturesque stretch of a bike path along the Hudson River, leaving behind mangled bikes and bodies.

The carnage ended at an intersection in Tribeca near the World Trade Center, where the truck smashed into a small school bus. Then the suspect exited his truck, brandishing a paintball gun and pellet gun before being shot by a New York Police Department officer.

One official claimed Saipov appeared “proud” of his actions.

In August, Moroccan Younes Abouyaaquoub rammed a truck into a crowd in Barcelona, killing 13 people and injuring 100 more. He was the last remaining person of a terrorist cell. Other members of that cell plowed a black Audi into a crowd in Cambrils and killed one woman.

In July 2016, terrorist Mohamed Lahouaiej Bouhiel from Tunisia used a rental truck to kill over 80 people in Nice, France, on Bastille Day. The police knew about him due to “allegations of threats, violence and thefts over the last six years.” However, intelligence services did not know about him.

In late 2016, a Tunisian asylum seeker drove a truck with 20 tons of steel beams into a Berlin Christmas market. He killed 12 people and injured 49 more.

Belgium confirmed that one national died while three were injured in the attack. They have not released those names.

Germany confirmed that a national of theirs was also injured.

He screamed “Allahu Akbar!” after he exited the truck and police confronted him… Authorities found Saipov’s notes near the truck, in which he declared he carried out the attack for the terrorist group the Islamic State (ISIS).

MSNBC & CNN are still at a loss as to the driver’s motivations, pending the discovery of a Tea Party pamphlet at his next door neighbor’s house.

Yep, screaming “Allah is Supreme” in Arabic doesn’t give them a clue as to motivation.

They’re still holding out hope it was a Charlottesville copycat.

This seriously exists? And they actually call it that? Are you kidding me?

You can’t really blame the FBI for ignoring the leads they had on this guy, they were far too busy trying to dig up dirt on Donald Trump’s sex life and guarantee Hillary her place in the Oval Office. You know, Priorities.

Imagine how many people would have been saved if only the “silencer” on this weapon had been banned by congress.

There’s no way this is true.

Governor Cuomo has assured us that he is a “lone wolf”.

The NYPD said its just a “road rage” incident perpetrated by some guy from Florida.