Video has emerged of the Tunisian man pledging allegiance to ISIS. 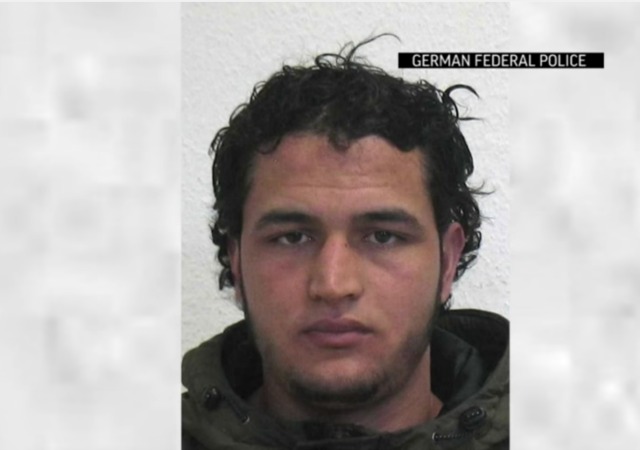 Authorities in Milan have killed the Tunisian man who drove a truck through a Christmas market in Berlin on Monday. The Wall Street Journal reported:

Italian police in the gritty Sesto San Giovanni neighborhood stopped Anis Amri just after 3 a.m. outside a train station for a routine check. When the officers asked the 24-year-old Tunisian for his identification, the man—who, according to Italian officials spoke fluent Italian—became agitated, pulled out a 22-caliber gun and began to shoot, shouting “Bastard police!”

As the police returned fire, Mr. Amri attempted to hide behind a car, but the agents pursued him, shooting him twice and killing him. One police officer received non-life-threatening injuries during the shootout, while a second agent was unharmed.

Italian police used fingerprints to identify the man, determining that it was “without a doubt” Mr. Amri, said Italian Interior Minister Marco Minniti.

Amri drove a truck through a Christmas market in Berlin on Monday, killing 12 people.

It turns out Amri traveled through France before ending up in Italy early Friday morning. But Milan’s police chief Antonio De Iesu said that Italian authorities did not receive any warning that Amri entered the country. But Amri knows Italy well:

German and Italian officials are investigating the possibility that Mr. Amri traveled to Italy to meet someone. “It is among the many hypotheses that we are looking at,” said Mr. Iesu. A judicial official said authorities were also considering whether he was looking to travel to the country’s south, a region that has been the main entry point for hundreds of thousands of migrants over the last several years and where many have settled.

Mr. Amri is familiar with Italy. He emigrated to the country from Tunisia in 2011, landing on the island of Lampedusa aboard a migrant boat.

Later that year, Italy rejected his application for a residency permit and he was arrested for setting a fire to a residence where he was housed. He then served nearly four years in a Palermo prison and was released last year.

The Italian government issued an order for him to be deported to Tunisia, but he didn’t comply. He later moved to Germany.

The Islamic State has taken responsibility for the attack. Its media agency released a video of Amir pledging allegiance to the terrorist group.

That’s too bad. Now we’ll never know what his motive was!

I blame the Confederate Flag.

Could’ve been getting even for the crusades. Obama warned, “Lest we get on our high horse and think this is unique to some other place, remember that during the Crusades and the Inquisition, people committed terrible deeds in the name of Christ.”

The Italian police – more effective by accident than the Germans even knew they should be.

… but even so, was able to travel undetected between Germany, France, and Italy …

… and was able to acquire a weapon (aside form the truck) …

Clearly European security is in the best of hands.

He was a good boy who was turning his life around and was about to attend Harvard in the spring. Why couldn’t the bloodthirsty police shoot to wound? He didn’t deserve to die.

Have I forgotten any of the leftist bullshit responses? Good shooting officers and have a speedy recovery.

Probably shot by a WHITE cop.

Rather pale and European looking. Just like the Turk who shot the russkie.

It was left up to Italy to take out Germany’s trash.