Elizabeth Warren evasive on whether Al Franken should resign

Elizabeth Warren evasive on whether Al Franken should resign 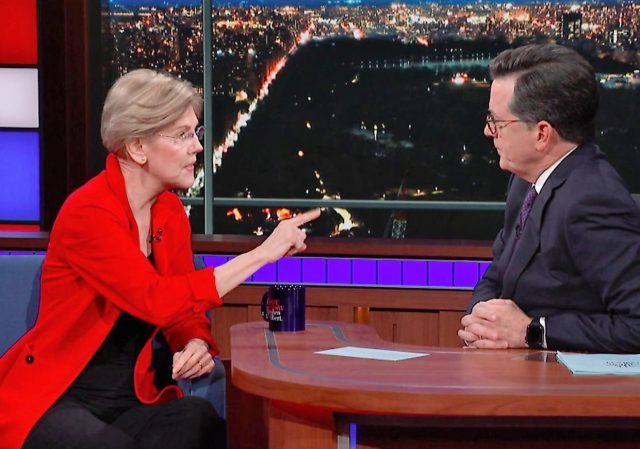 Elizabeth Warren is hardly a profile in courage as a politician. Warren loves to portray herself as brave for bashing Republicans, but when it is a matter of internal Democrat politics, she’s cowardly.

Now, when it comes to Al Franken’s groping photo and alleged non-consensual sexual advances, Warren once again avoids being brave.

The Boston Globe reports, On Colbert, Elizabeth Warren dodges question on whether Al Franken should resign:

Sen. Elizabeth Warren is already on the record calling the alleged sexual misconduct of her Senate colleague, Al Franken, “unacceptable and deeply disappointing.” But when late-night host Stephen Colbert asked Warren directly if she thought Franken should step down during Tuesday’s episode of “The Late Show,” the Massachusetts senator went in a different direction with her answer.

“Al Franken, a comedian I’ve long admired and a politician I’ve recently admired, has been caught up in two accusations, one of which he’s acknowledged and apologized for,” Colbert said. “People are calling for Al Franken to step down. Do you think he should?”

“I was just enormously disappointed about this,” Warren said. “I knew Senator Franken long before he was Senator Franken, and his wife, Franny. These allegations are serious, and women have a right to be heard and listened to on this. Al is going to be subjected to a hearing in the Unites States Senate . . . and he’s going to go in and answer.”

In fairness, the Globe notes that Warren dodged on expelling Roy Moore, though that was a easier dodge since Warren answered the question by suggesting Moore wouldn’t get elected.

Why is Warren so hesitant? Perhaps because once past scandals from decades ago are put on the table as to whether a Senator should be expelled, where does one draw the line? Would ethnic fraud be a ground to remove a Senator? Just a *random* thought.

In related news, Warren lashed out at Trump’s use of the term “Pocahontas” to describe her.

Sen. Elizabeth Warren (D-Mass.) said President Donald Trump’s attacks on her will not stop her from criticizing his administration or the Republican agenda in Congress.

Appearing on “The Late Show” Monday night, Warren took a moment to respond to the president’s tweet from earlier this month, in which he attacked Democrats and referred to her as “Pocahontas,” a term many Native Americans consider a slur.

Donald Trump thinks if he’s going to start everyone of these tweets to me with some kind of racist slur here that he’s going to shut me up. It didn’t work in the past it’s not going to work in the future give it up. – @elizabethforma does not have time for Trump’s games. #LSSC pic.twitter.com/taACWAf7KW

TONIGHT: @SenWarren and @StephenAtHome examine how their lives have changed since @realDonaldTrump took office a year ago… Wait. Just one year? That can't be right… #LSSC pic.twitter.com/egNNJua9Ih

Warren played the game she and her defenders are playing, calling the term “racist” without addressing why it’s used. The term is clearly mocking Warren’s false claim to be Native American, not to denigrate actual Native Americans. We’ve covered this issue before:

Trump has effectively branded Warren as a fraud by calling her “Pocahontas,” That term mocks Warren not for being Native American, but for her fake claim to be Native American.

It’s not a term we use (just as we don’t use fauxcahontas or other similar terms) because (i) it’s demeaning to the Native Americans who were the victims of Warren’s ethnic misappropriation, and (ii) it provides the perfect distraction for Warren and her supporters to avoid discussing the substance of what Warren did to rip off Native American identity to try to gain an advantage in the law school hiring market. But just like “Low Energy” Jeb and “Little” Marco, it’s effective at defining Warren’s personal character flaw.

As her Late Show appearance shows, Trump’s use of that term provides Warren the out she needs to avoid addressing her own ethnic deception.

“Warren loves to portray herself as brave”

Still up with the word play – well done.

notamemberofanyorganizedpolicital in reply to rabid wombat. | November 21, 2017 at 1:17 pm

I see what you did there Professor.

Warren and her Leftist Fellow Travelers seem ignorant of the Streisand Effect.

The more they yak about their own Hyper-Hypocrisy, the more Americans open their eyes to their lies…….

Of course Pocahontas is a slur. That is what he is doing. Using a slur to clarify what a scoundrel Ms Warren is.

What actually is RACIST? Warren pretending to be Cherokee to land a job as a “diversity” hire. Is this “cultural appropriation”? Its definitely “appropriation” of a job that was intended to go to a native american (based entirely on race).

Definitely “cultural appropriation” – The “Pow Wow Chow” book PLAGIARIZED all of the recipes.

Warren would be better served by not bringing up the topic at all.

Warren’s behavior isn’t going to change no matter what terms are used to describe her. The term “Fauxcahontas” is a concise, laser-targeted term that quite unmistakably paints Elizabeth Warren right between the eyes. One word conveys her very essence rather than using a word salad of unreciprocated political correctness that allows her to dance away from the truth. Doesn’t do much good to call her out while simultaneously escorting her down the red carpet to the nearest exit.

notamemberofanyorganizedpolicital in reply to Merlin. | November 21, 2017 at 1:20 pm

I always though it was so odd that a couple of GOPe introduced the term “Political Correctness” on PBS way back in the 80s.

Trump’s use of that term provides Warren the out she needs to avoid addressing her own ethnic deception.

It does? But she can’t complain about it without reinforcing it by repetition. A few more “outs” like that and she’ll be a lot closer to being out of a job.

Warren sill looks way more like an Indira than a Pochahontas to me.

how bout Indira Jones’, she sure uses the ‘Bull’whip alot.
and she needs lots of TP to clean it up and wipe it away like with a cloth (hat tip Shrillary the Shrew).

From “Good Will Hunting” – “He was an Indian — dot, not feather”

The fact liberals are more outraged by the term Pocahontas than they are about Warren appropriating another people’s entire cultural heritage for her own absolute selfish ends tells you everything you need to know about how much liberals actually care about anything other than their own rabid self interests.

The slur is not against any Indians, including the real Pocahontas. It’s a short-hand reminder of Warren’s use of fraud to take somebody else’s job. In my opinion, it does not provide Warren with any “out” at all. Every time she attacks DJT for using that term in lieu of addressing her own deception, she loses.

Meanwhile, the underlying subtext, that quotas in hiring and affirmative action in general are routinely abused by those who think of themselves as our betters, runs unabated in the heads of many skeptical voters.

Warren said, “These allegations are serious, and women have a right to be heard and listened to on this.”

Did I miss something? Did she not also say that women should be believed? Why leave that out? Perhaps because she does not believe Bill Clinton’s accusers either.

Trump really needs to figure out how to do this properly though:

FAUXCAHONTAS is how you land the blow

Really just misses the mark, and opens himself up to attack at the same time.

How about taking a DNA test to clear this all up? Nope…