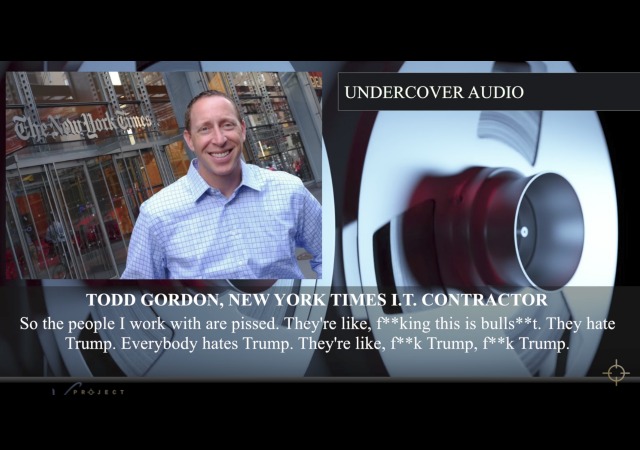 Project Veritas dropped another video in its investigation into The New York Times, this time catching IT consultant Todd Gordon admitting that the paper unfairly reports on and hates President Donald Trump.

These same sentiments were expressed in the previous videos. In the first video of the series, Audience Strategy Editor Nicholas Dudich told an undercover reporter he chose the NYT so he doesn’t have to be objective. NYT Senior Homepage Editor Desiree Shoe appeared in the second video. She admitted the paper has a left-leaning bias and it tried to influence the 2016 election.

Gordon has worked at the paper for 20 years and he told the undercover reporter that there is not one person at the NYT that likes Trump, echoing Shoe’s sentiment. He said that everyone “hates him [Trump] like the plague.” 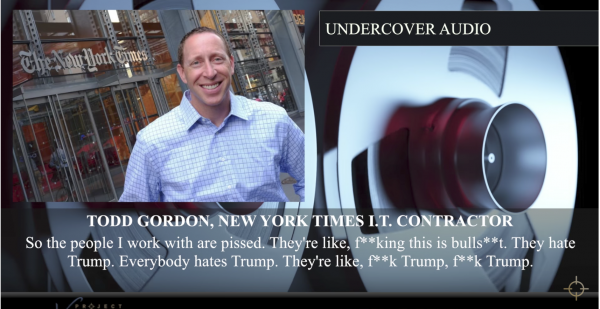 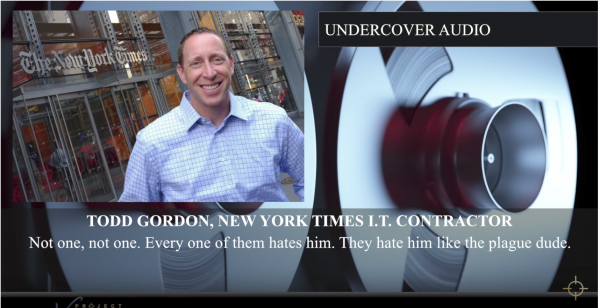 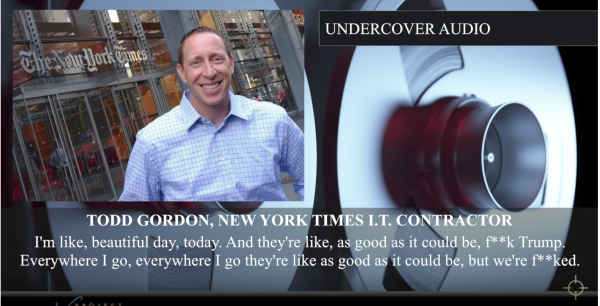 Knowing that the NYT doesn’t have a voice of dissent, the undercover reporter asks Gordon if the paper can report without bias on Trump and if the paper unfairly reports on Trump.

Gordon said they cannot report without a bias and 100% agrees that the paper unfairly reports on Trump. 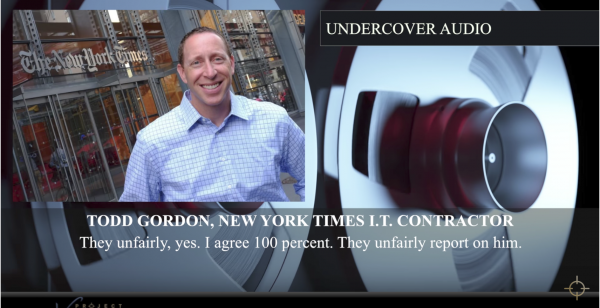 The Russia/Trump collusion story came up and Gordon told the undercover reporter that the paper lacks sources. 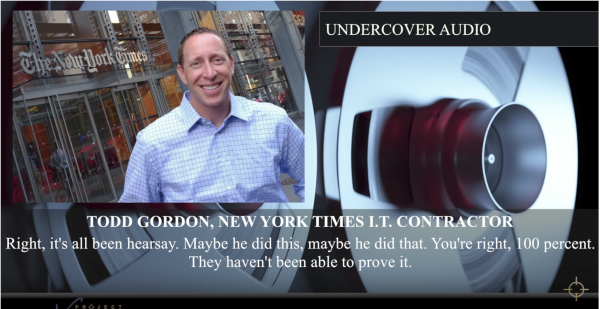 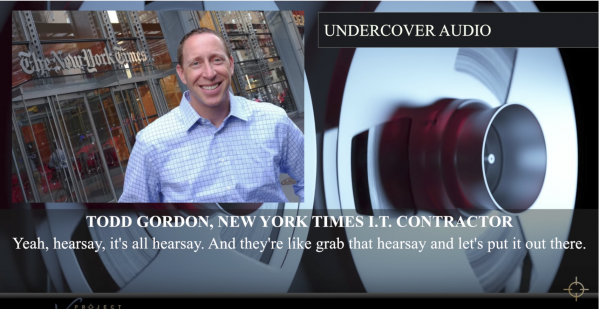 O’Keefe jumps in to remind viewers that the NYT has run into a few problems with anonymous sources, including have to change two major front page stories in 2015.

The problem got so out of hand that the paper had to change its policy since “readers question whether anonymity allows unnamed people to skew a story of their own agenda.”

O’Keefe found NYT Deputy Managing Editor Clifford Levy in Brooklyn, NY, on Wednesday and asked him about the paper’s unethical staff members. To no one’s surprise, Levy remained completely silent and ignored all the questions.

hmmmm and the New York Times is owned by Carlos Slim….. but that doesn’t count as foreign influence?????

notamemberofanyorganizedpolicital in reply to 2nd Ammendment Mother. | October 19, 2017 at 1:41 pm

You’ve got it right.

It’s and organ as foreign and anti-American as the Clintons…..

Thanks for reporting this Mary.

We all know this, but we should put together a BIG portfolio of all these confessions.

No. In and of itself, it doesn’t count as…anything.

Now, if you’ve got more than a bald coincidence of ownership, put it up.

As Milhouse has correctly noted, any foreign person or entity has every right to express their “influence” in the U.S.

And, as I’ve correctly pointed out, that’s ONLY true if it is done in the open.

So, you take the floor, and provide some facts to support your innuendo. You might convince me.

Now, if you’ve got more than a bald coincidence of ownership, put it up.

That’s one of the funniest things you’ve ever said, Rags. Literally LOL’d.

Why? Should we run through the current and historical ownership of businesses in the U.S.

Would you like to limit it to news outlets?

Just call the tune. I’ll be happy to dance.

OK, let’s be very clear; for decades many of us have noted the bias of the NYT.

They are but one of the organelles of the Collective in this regard.

I applaud the work of Veritas in this effort, if for no other reason than bringing this to a new generation.

But this is simply the opinion of a (inebriated) contractor. It has some merit, but it should be limited. Some of what he says was never fact-checked. A LOT of what he says will be taken WAY too far as being simple bias confirmation by biased people.

Is any part of it a “Shaaaaaaazaaaaaaam” moment? Not to those of us who have been conscious for decades.

Is the NYT utterly, completely devoid of valid content? Not according to Mr. Establishment, who habitually grants its reporters extensive, exclusive interviews.

Or to LI, which quotes from it every week.

“Or to LI, which quotes from it every week…” Have to agree with that one. However, LI does take on the job of monitoring the left’s propaganda.

But Trump has his own agenda with the NY Slimes. And he’s workin’ in.

OK. Why don’t you VERY clearly and exquisitely define what that agenda is, since you appear to have one of the secret decoder rings.

Judging from the videos I’ve seen so far, it seems that NYT employees are unfamilar with the word “say,” using “like” instead. Perhaps the newspaper’s become so debased that its employees are unable to conjugate verbs.

NYT and all other media dutifully chases the Frisbee and retrieves it, prances around the yard with it like it’s trophy; completely unaware of who is the master and who is the servant in this exchange.

Repeat to infinity for 7 1/2 more years.