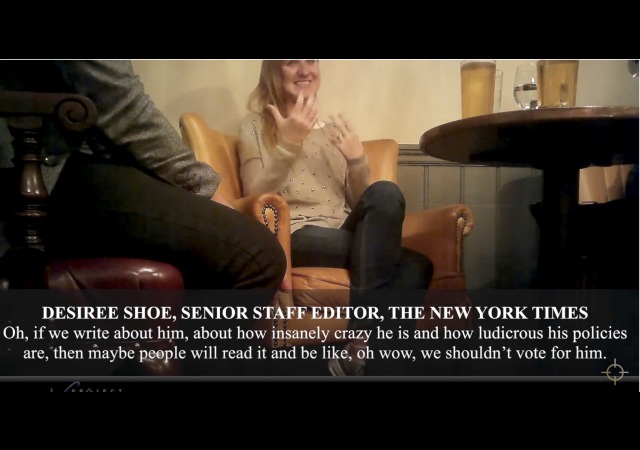 James O’Keefe and Project Veritas have dropped another undercover video with an employee from The New York Times admitting a left-leaning bias at the historic publication.

NYT Senior Homepage Editor Desiree Shoe told the undercover reporter that the paper tried to influence the 2016 presidential election with its reporting and called Vice President Mike Pence “f*cking horrible” due to his religious beliefs.

Shoe explains that she monitors breaking news and writes the alerts for the NYT. Her “job right now is to curate the front pages.”

Shoe explains that the journalists thought if the paper wrote “about how insanely crazy he [Trump] is and how ludicrous his policies are” it would influence people not to vote for him. 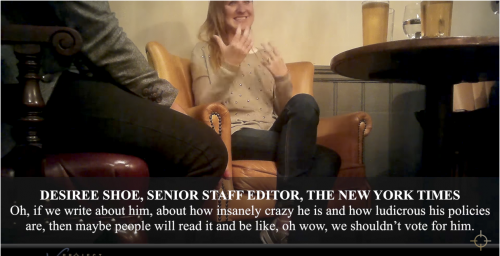 Shoe admits that the “main stories” at the NYT “are supposed to be objective,” but that is “very difficult in this day and age to do that.” Her excuse? Well, she brought up the Charlottesville riots and complained that they couldn’t portray Trump “in an unbiased light when the words that are coming out os his mouth are apologetic toward white supremacists, which is what they were.” 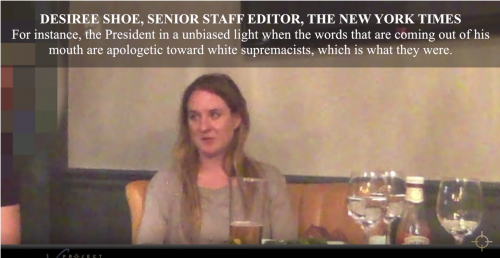 She calls President Donald Trump horrible and a bumbling idiot, but thinks Pence is worse because “[H]e’s extremely, extremely religious.”

However, instead of tackling the bias, the NYT has seen a rise in subscriptions. Shoe said that the paper calls it the “Trump bump.” O’Keefe shows that Shoe is not lying, noting a 63.4% increase in digital subscriptions alone.

Due to the paywalls that many big time papers have, like The Washington Post, these publications have to do what they can “to grab subscribers.” Shoe told the reporters that the publications “do that any way that you can.”

Shoe said the NYT doesn’t want to be known for its click bait, but when the undercover journalist told her that he thinks of the paper as a click-paper and Shoe reluctantly agrees. 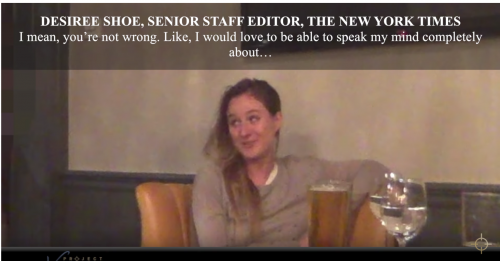 Shoe also admitted that American newspapers should be objective and that the world assumes the NYT has a liberal-leaning bias. The undercover journalist flat out asks if the paper has a bias and she said, “I’m not saying that they’re not. I’m saying it’s widely, widely understood to be left-leaning.” 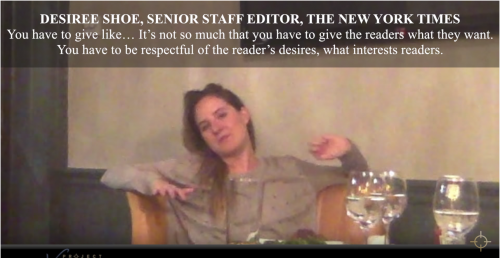 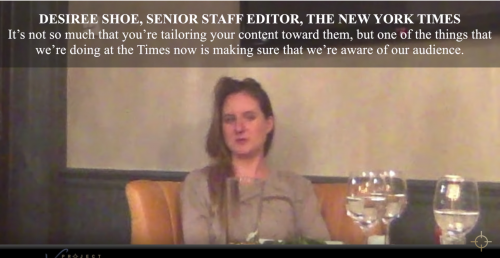 Shoe explained that the process does not necessarily mean that “you’re tailing your content towards them, but one of the things that we’re doing at the Times now is making sure that we’re aware of our audience.” This doesn’t mean that the NYT will “condescend to them, but it also doesn’t mean that we’re going to be holier than thou” by trying to tell the consumers “what they should or should not be consuming.”

This is the process: You give the consumers the news and “see where the pieces fall.” 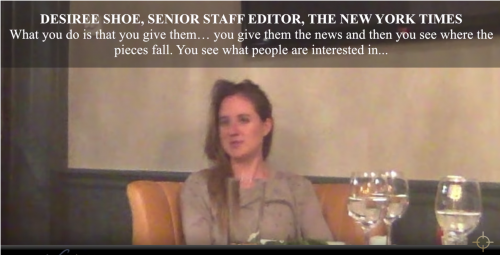 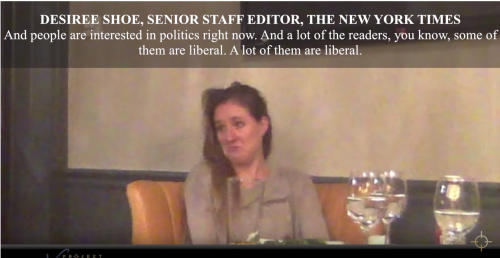 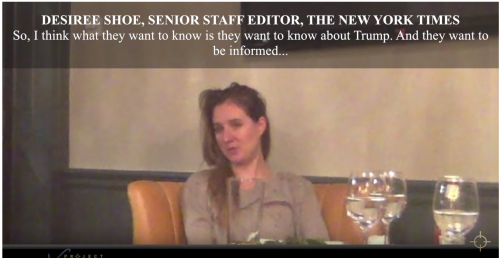 The undercover report found this wrong, saying the NYT is really only “feeding the monster” instead of just doing what they should do: report the news. Shoe asked him what else should the paper do, basically admitting that the only way to stay in business is to keep up the bias.

Even if she were unbiased, we should be alarmed by how inarticulate this “editor” is.

Pass the wine. Look at all those glasses!

In addition to being a repulsive, crass, liberal atheist, she is about 2 centercut porkchops ugly.

She would have to tie two porkshops to her neck to get a dog to let her pet it.

Notice that she becomes more truthful as the pint glasses empty!

And when did the word “curate” become common outside of the museum industry?

Yeah right, hurt me, hurt me…
I’m sure! no way!
He was like freaking me out…
He called me a beastie…
Thats cuz like he was totally blitzed
He goes like bag your face!
I’m sure!

What about her brother Das Boot?

NYT biased?! Let me find my shocked face! Pravda on the Hudson is well known.

This ignoramus has no knowledge of world history. None.

Maybe one day she’ll learn, when she’s like, imprisoned, tortured and then, like, shot by her fantasy fascist leader for some perceived slight. Then other Desiree ‘shoe’ will drop. (Drop dead, that is.)

The reality of a reign of Hillary the Terrible was literally just a few votes away in 2016. Absolutely surreal, the bullet we dodged.

Here, Desiree: read about the horrors of world history, and what a miracle our country is – and what a fool you are:

Is there another industry where so-called “professionals” at the leading organizations can so brazenly flout their professional association’s rules of ethics with impunity?

The Dudich “expose” was a bust. Dudich turns out to be a recent hire with no input on content, who made up a bunch of nonsense in order to brag to Veritas’s reporter. “Audience Strategy Editor” apparently meant he was given videos and told to find places to post them where people would see them.

Here’s to hope that the newest effort by O’Keefe is going to have more impact than his undercover tapes he produced last fall, when he successfully infiltrated the “dirty tricks” shop of the DNC. (They all but admitted on tape that they had big plans for election fraud in the near future.) They are good
“comrades”, all of them. That includes the great leaders at the NY Times, incl. this ignoramus named Shoe.

Did you hear about the two NY Times editor who froze to death in a drive-in movie? She went to see “Closed for the Winter.”
Why did the NY Times editor have only 3 children? She heard that every fourth child born is Chinese.

A NY Times editor was shopping at a Target Store with Michelle Obama. They came across a thermos, in shiny silver, much like the dress Harvey Weinstein put Michelle in when he had her appear on the Oscars. Both were fascinated by it. They picked it up and brought it over to the clerk to ask what it was. The clerk said, “That’s a thermos . . . it keeps some things hot and some things cold. Excited, the NY Times editor bought it for Michelle, saying how nicely it matched her dress. The next day, Michelle showed it to Barack, who asked. “What do you have there?” he asked. Michelle said, “It’s thermos . . . it keeps hot things hot and cold things cold.” Barack asked, “What do you have in it?” Michelle replied, “Two Popsicles and some coffee.” Barack’s eyes lit up: “Can I have a popsicle?”

A man entered the subway with both of his front pockets full of golf balls, and sat down next to a NY Times editor. The puzzled NY Times editor kept looking at him and his bulging pockets. She asked him what was in his pockets. The man said, “Who are you, Jimmy Kimmel?” The NY Times editor said, “No, but we do look alike. Seriously, what do you have in your pocket?” “I have golf balls,” the man answered. The NY Times editor looked at him with sympathy and asked, “”Does it hurt as much as tennis elbow?”

A young man wanted to get his NY Times editor wife, Susie, a gift for their first wedding anniversary. So he bought her a new iPhone8. He showed her the phone and explained to her all of its features. Susie was excited, and loved the phone. The next day the husband called her while she was out shopping: “Susie, how do you like your new phone?” Susie replied, “I love it! Hey – how’d you know I was at the mall?”

Two NY Times editors were sitting outside one evening, talking. One says to the other: “Which do you think is farther away: Florida or the moon?” The other NY Times editor turns and says: “Are you joking? I mean, like, can you can you see Florida…?”

A NY Times editor pushed her BMW into a gas station. She tells the mechanic it died. After he works on it for a few minutes, it is idling smoothly. She says, “What was wrong?” He replies, “Just crap in the carburetor.” She asks, “Really? How often do I have to do that?”

A police officer stops a NY Times editor for speeding and asks her if he could see her license. She replied in a huff, “I wish you cops would get your act together. Yesterday you take away my license and then today you expect me to show it to you?!”

A highway patrolman pulled alongside a speeding car on the freeway. Glancing at the car, he was astounded to see that the NY Times editor behind the wheel knitting as she was driving. Realizing that she was oblivious to his flashing lights and siren, the trooper cranked down his window, turned on his bullhorn and yelled, “PULL OVER!” “NO!” the NY Times editor yelled back, “IT’S A SCARF!”

A NY Times editor was playing Trivial Pursuit one night. It was her turn. She rolled the dice and she landed on Science &Nature. Her question was, “If you are in a vacuum and someone calls your name, can you hear it?” She thought for a time and then asked, “Is the vacuum on or off?”

A woman wrote a NY Times editor was covering a story about the NYPD’s two new watchdogs. Back at the office, she forgot the name of the dogs. So she headlined her story: “Working the NYPD K9 shift with Timex and Casio.”