The obsession with demonizing Israel is beyond political at this point. 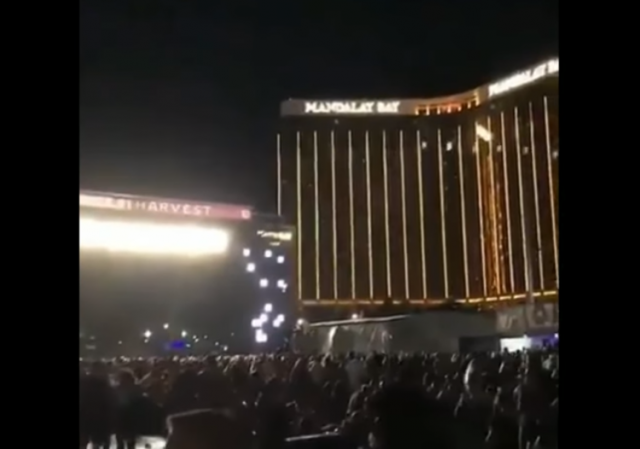 When I woke up this morning and learned of the Las Vegas shooting, I fully expected all sorts of horrible hot takes and political exploitation.

But I have to admit, as attuned as I am to anti-Israel activists hijacking causes and events to turn them against Israel, it never entered my mind that the Las Vegas shooting would be exploited in that manner.

After all, as far as is currently known, the shooter and the shooting have nothing whatsoever to do with Israel. (There is a claim of responsibility by ISIS, but that is unverified.)

So, I actually was surprised when I saw a tweet from Yair Rosenberg:

“American guns are overwhelmingly produced in America, but there is no atrocity that cannot and will not be blamed on the Jews or their state.”

Rosenberg was referring to this tweet from Yousef Munayyer, responding to a statement from the Israeli Embassy sending their “thoughts and prayers” and “love and solidarity” to the Las Vegas shooting victims:

“Also from Israel, assault rifles into the US market” 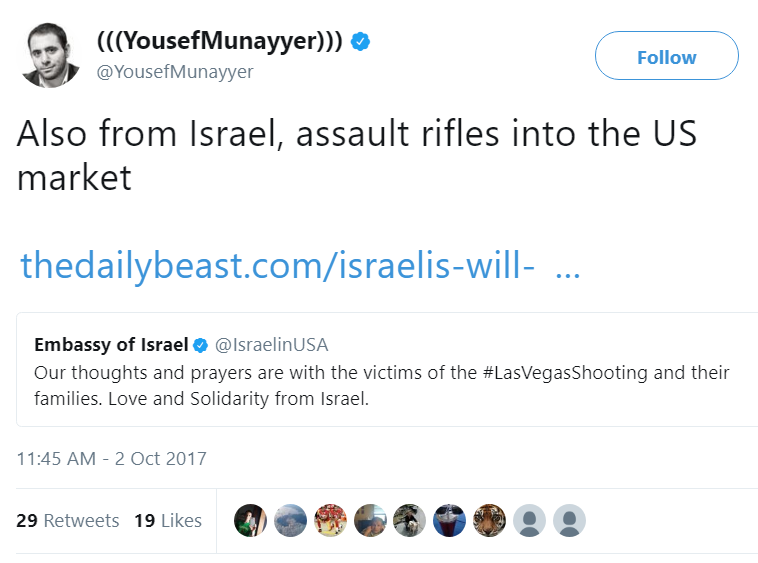 The tweet links to a February 2017 Daily Beast article that in the future AK-47s for the US market may be manufactured in Israel. Currently, the weapons are manufactured in many places, including the U.S.

So why bring up Israel at all? Why try to make the Las Vegas shooting about Israel, or by implication, suggest that Israel is somehow connected to gun violence in the U.S.?

We’ve seen a similar tactic in other contexts by anti-Israel, pro-BDS Jewish Voice for Peace, whose Deadly Exchange campaign seeks to blame Israel and pro-Israel Jewish groups for police violence against non-whites in the U.S.

Munayyer leads the U.S. Campaign to End the Israeli Occupation, recently rebranded as the U.S. Campaign for Palestinian rights. It is a leading promoter of the Boycott, Divestment and Sanctions movement and is a group trying desperately to gain political legitimacy, with only limited success.

It also should surprise no one that the U.S. Campaign staff posted a photo in support of convicted terrorist murderer and immigration fraudster Rasmea Odeh the day she was deported (Munayyer is third from left in back row): 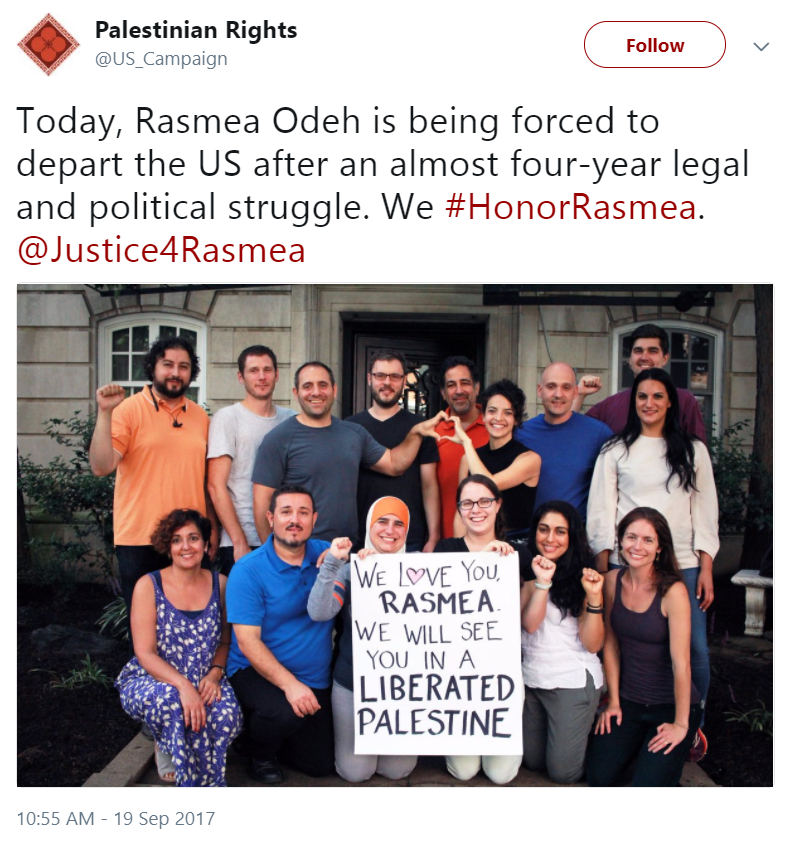 Dave from Israelly Cool had a good response to Munayyer:

“You have an illness. Seek help. Preferably not from a Jewish doctor”

(added) So did Avi Mayer: 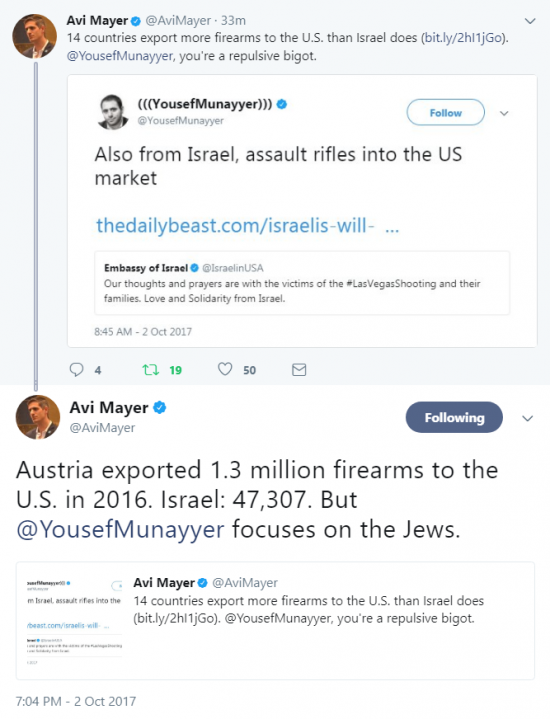 The attempt to demonize Israel is beyond political at this point.

So glad the President and others are calling “evil” what it is: EVIL.

Someone should really tell this Munayyer character that there is no such thing as a ‘Palestinian”. He’ll have apoplexy but it is simple truth … look it up, Yousef!

notamemberofanyorganizedpolicital in reply to Walker Evans. | October 2, 2017 at 6:19 pm

There is no “race” of people such as “Palestinian.”

The left is a fascist movement: they will do anything, say anything or hurt anyone in the way of their “cause.” That mean they have their sights on us. Literally.

The leaders of these movements are as corrupt and power-hungry as hillary clinton, though many are actually competent. Most sadly, they have an army of useful idiots completely indoctrinated by and in the bubble of the democrat media. Until the likes of PBS and NPR are defunded (or turned pro-American), this will continue until there is a civil war.

Forget the ignorant bozos who play for the NFL, or the likes of LeBrainless James: listen the hatred and ignorance of one of CBS’s top lawyers (Hayley Geftman-Gold) and now-former VP, on the killing of the 59 country music fans in Las Vegas: she said she is “not even sympathetic” to victims of the Las Vegas shooting because “country music fans often are Republican.”
http://www.foxnews.com/entertainment/2017/10/02/top-cbs-lawyer-no-sympathy-for-vegas-vics-probably-republicans.html

When you have people at this level of intellect and social power so ready – and so publicly – to see us die, you’d better begin to realize the talk of the left is not just talk: it’s a call to violence against us.

Many on our side scoffed at the idea of FEMA camps operating as places of political imprisonment and oppression. Think about what this highly positioned psycho Hayley Geftman-Gold said. Now think again about being in a FEMA camp if hillary clinton was president.

Face it: in the eyes of the leaders of the left and their useful idiots, we have been dehumanized.

Next is genocide, if they ever gain power over us again.

Wow. You really are a paranoid lunatic. FEMA Camps indeed. You don’t need a camp, you need a padded room.

I notice the former CBS lawyer girl who thought the shooting in Vegas was probably OK because the dead and wounded were probably gun owning Trump supporters was a privileged New York Jew. I guess they don’t teach history much anymore because the idea that mass murder is ok as long as it is the right kind of people getting killed only leads to more and more deaths.

I was surprised that they promptly fired her. I wonder what else she’s done?

Fired her? Today is Monday, I wonder how long before she is quietly rehired by some other big left wing conglomerate. I wouldn’t be shocked to see CBS rehire her in 2-4 weeks.

OMG, they fired her for exercising her first amendment rights! Witness the oppression! They can’t do that, can they? Oh, right, they can. So why does the NFL and its team owners pretend they can’t?