Not a single Congressman would sponsor the event by U.S. Campaign to End the Israeli Occupation 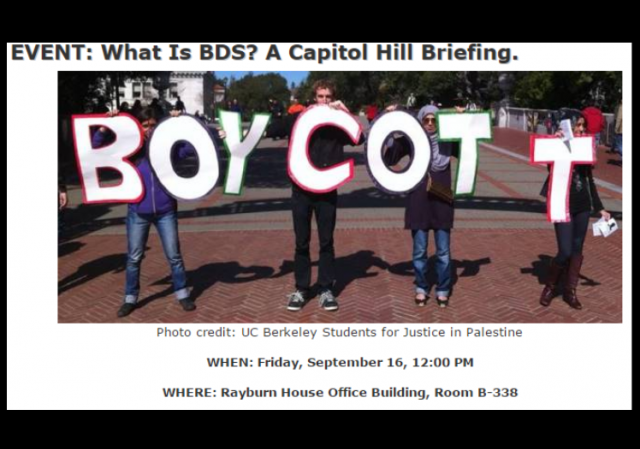 I reported yesterday how one of the most extreme BDS groups, the U.S. Campaign to End the Israeli Occupation, was scheduled to hold an event on Capitol Hill on Friday.

The U.S. Campaign is behind a lot of anti-Israel efforts, such as the demonstrations at the Democratic National Convention this summer. 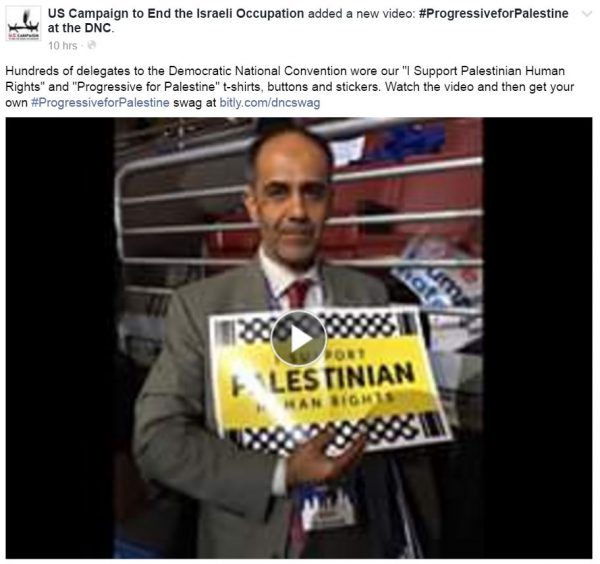 The event was first disclosed in an article in The Free Beacon, which noted that no Congressman would admit to sanctioning the event, which would have been necessary for the room to be reserved.

The impropriety of hosting such a group went beyond the pro-BDS position, which has close to zero support in Congress. The U.S. Campaign is particularly notorious for outrageous provocation, such as when its Policy Director used the anti-Semitic slur “Israel Firster” against Senator Chuck Schumer.

The issue escalated today as it became apparent that the event may have violated Congressional anti-discrimination rules, as The Free Beacon further reported in a follow up, Congressional Forum in Favor of Boycotting Israel May Violate Rules on Discrimination:

Internal congressional documents governing the use of federal facilities also bar lawmakers from hosting any outside organization that practices discrimination.

Human rights groups and Jewish organizations have long accused the U.S. Campaign to End the Israeli Occupation, the organization leading the Friday event, of engaging in anti-Semitic rhetoric and supporting discrimination against the Jewish state.

“These rooms shall NOT be used for… organizations practicing discrimination based on race, creed, color, or national origin,” the policy mandates.

Now it appears the event it off.

The Democratic House lawmaker who had anonymously sponsored a controversial House event advocating for economic boycotts of Israel withdrew her sponsorship Tuesday, THE WEEKLY STANDARD has confirmed, and the briefing has also been cancelled.

The office of Texas congresswoman Sheila Jackson Lee had reserved a room on Capitol Hill for the U.S. Campaign to End the Israeli Occupation to host an event on Friday. The briefing was advertised to feature “actual pracitioners” of the Boycott, Divestment, and Sanctions (BDS) movement, according to the invitation.

The event was publicized Monday and drew controversy, with several Democrats, including Jackson Lee, denying any connection to it.

Tuesday, however, Jackson Lee’s office confirmed to TWS that the room had been booked by a former staffer, and that they had withdrawn their sponsorship. A senior House GOP aide later told TWS that the event had also been cancelled.

“That room was actually booked by a staffer that’s no longer with us, back in March,” Jackson Lee’s communications director, Mike McQuerry, told TWS. “This was done without the knowledge of anyone in the office.”

“We’ve taken our name off of booking the room,” he continued. “We weren’t involved with planning.”

McQuerry said that the office did not know anything about the U.S. Campaign to End the Israeli Occupation, the group hosting the event.

“We had never heard of [the group] until today,” he said. “We didn’t know who they were.”

This is a big loss for BDS. This event was not meant to change congressional minds, it was to be used for propaganda to create the false impression that BDS has support on Capitol Hill.

One of the “safest” of all safe seats in the House.

She’s also the stupidest and, hear tell, the meanest to her staff.

Had to come from a Black Caucus member. That’s because contrary to Jewish Democrat hallucinating about some magic shared interests with African Americans, the latter remain far and away the most vicious anti-Semites in the country. Source? Try this:

Would be mildly interesting to find out why and when the staffer became “former” – to cover up this idiocy?
Or are they just laying off the blame on a “former staffer” who can’t respond?

I’d bet that the staffer, if they existed at all, was moved to the employment of another pol.