Keep your hands off my retirement. 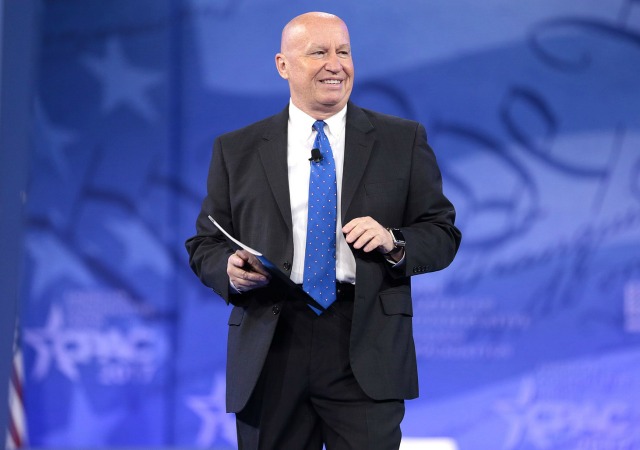 I’ve been keeping an eye on tax reform and ideas to make changes to 401(k) retirement funds have caught my eye. At first, tax writers wanted to tax your earnings before you place money in the fund. Then over the weekend they floated the idea of changing the pre-tax limit to $2,400 instead of $18,000.

Of course this has caused an uproar, which led President Donald Trump to tweet out on Monday that tax reform will not include changes to your 401(k). House Ways and Means Committee Chairman Kevin Brady (R-TX) has said not so fast and the option remains on the table.

Brady is not alone. Senate Finance Committee Chairman Orrin Hatch (R-UT) is also open to other changes. From The Washington Post:

The Texas congressman, speaking at a breakfast hosted by the Christian Science Monitor, said, “We think in tax reform we can create incentives for people to save more and save sooner.”

He said he was “working very closely with the president” on the issue and added that many people who have tax-incentivized retirement accounts contribute $200 per month or less, a level he thought was too low. “We think we can do better,” Brady said. “We are continuing discussions with the president, all focused on saving more and saving sooner.”

Several hours later, Senate Finance Committee Chairman Orrin G. Hatch (R-Utah) also said he would oppose Trump’s vow to protect 401(k) plans but that he was open to changes if they made sense. “I’m open to look at anything,” Hatch said Wednesday morning. “I don’t have any problem looking at everything.”

He also said he doesn’t feel pressure to change the Senate’s eventual tax bill because of pressure from the White House. “No I don’t think so,” Hatch said. “He has his point of view, and he may prove to be right in the end. We’ll just have to see. But I’m open-minded about it.”

FIRST OFF, it is not the government’s business how much a person puts into the 401(k) account. People also shouldn’t be punished for putting a small amount of money into their account. If they don’t want to save a lot then that’s their choice.

SECONDLY, as I blogged this weekend, if the government is in need of money, become a sane person and slash the budget. When I run out of money I look at my budget to determine what I can cut out.

Also, Brady wouldn’t provide “details about how he planned to change incentives to encourage more savings.” He said “that the current construct of 401(k) accounts and Individual Retirement Accounts was not working well.”

Investment Company Institute said that “Americans have saved $7.5 trillion in 401(k)-type accounts, plus $8.4 trillion in individual retirement accounts.” WaPo reported that “more than 50 million Americans had active 401(k) accounts” in 2015. Seems to be working just fine and dandy.

Brady also stated that he expects an agreement on another hot button issue: state and local taxes. The framework the Trump administration released suggested eliminating these as a tax deduction.

To no one’s surprise, this caused outrage from lawmakers that come from high taxed states. To them I’d say to convince your state not to tax the citizens to death and then this wouldn’t be a problem. But the House leaders need some of these people in order to pass the bill. From The Wall Street Journal:

House leaders need at least some of those members’ votes to get the bill through and they have been negotiating with New York and New Jersey lawmakers. So far, they haven’t announced a deal, though they have been considering proposals to allow property tax deductions or to set an income limit for the tax break.

Mr. Brady said Wednesday that he was confident they would reach a compromise on the issue.

“I do expect to reach an agreement over [the state and local income tax deduction] with the high-tax lawmakers,” Mr. Brady said, noting he had met with the group Tuesday night. “I expect before the bill is laid out next week that a solution will be announced. It’s a work in progress.”

The deduction allows individuals to subtract their home-state levies from their federal taxable income. In high-tax states such as New York, that can allow taxpayers to save big.

Brady insisted that the tax plan will not eliminate “business deductions for state and local taxes.”

The Actual Bill and Budget

Brady said they expect to release the bill on November 1, but he will not release any inkling about the approach or details. He stated, though, that “the most pressing decisions have not been reached.”

Bro, you have a few days. Chop, chop!

WaPo detailed those pressing issues that haven’t been decided yet:

He also wouldn’t say how the tax bill would affect the type of taxes paid by hedge fund managers, even though Trump has promised to eliminate their special preferences.

House members have said they won’t vote on the budget on Thursday unless they know details of the tax plan. They need to pass the budget before tax reform and the support for the budget is incredibly thin:

After keeping details closely held, House Republican leaders are hoping to introduce specific language for their tax-cut bill next week, but the process will stall immediately if they can’t pass the budget resolution Thursday.

This budget pairs with the Senate budget, which will allow reconciliation to occur. That means the Senate can pass a tax reform bill without a filibuster if the bill less than $1.5 trillion to the deficit.

I still suspect a back-door money grab out of all that juicy, undefended, tax-deferred money just sitting there. Republicans are just as guilty of greed as the Dems.

What I’m thinking will happen is a move to ‘protect’ our retirement savings by requiring 401k plans to put X% of the fund into Federal Bonds for every year the saver is over Y, therefore pushing money out of high-yield investments into ‘safer’ bonds, and quite possibly if they’re feeling unusually greedy, the creation of a new government bond type supposedly super-safe, which of course would pay less interest.

You want a civil war? This would be a good start.

Tyrant Obama the Liar increased discretionary spending massively. This is were the cuts should be made first.

Republicans like Brady are certifiably stupid and work overtime to help the GOP earn the moniker of The Stupid Party.

They pass over the prospect of spending cuts entirely.

They, the members of Congress, along with the POTUS, have pensions, and the benefits far exceed what most in the private sector could ever hope for, particularly younger employees and employees of relatively young companies.

They are incapable of fixing social security and other transfer programs that are going to screw over young Americans.

And then their best idea is to curtail saving and investment by people that work and create in the private sector.

Just a Reminder. Uniparty still wants to steal your retirement accounts when the opportunity arises.

This would end Trumps support

>This would end Trumps support<
for the GOPee that's a + not a -.

Trump is not a dummy and will not sign a bill which screws his base.

he will Tweet to get support for him and threaten to go Independent and that will end the Republican Party and start
the Tea Party as a entity and invite who ever wants yo, to identify with it.

So the GOP will begrudgingly keep their campaign promises to lower taxes. But they’re certainly not going to lower their reckless spending. They’ll just penalize us to keep up their spending addictions…

The fact that many people contribute less than $200 should mean it’s fine to leave 401(k)s alone.

How much most people contribute is not a factor> We used 401k plans and IRAs when they were available to us for years to amass a 7 digit
portfolio. Thanks to the USA. Those who do not participate are STUPID. And we should not apologizefor them.

When the 401K’s were introduced, it signaled the end of the pension plans our parents knew. The only people still receiving that benefit are government employees and union workers. The rest of us are on our own. To change the rules now is insanity and for the GOPe to even think about such a move tells you how out of touch they are. If Congress had to depend on their savings and investments to retire, they would not even be considering this.

A “tax cut” that shifts the burden to maintain the revenue stream is not a tax cut. A real tax cut is supposed to stimulate the economy and bring in more tax revenue due the stimulus, while people and businesses pay less per unit of earnings.

A “tax cut” that shifts the burden is nothing more than sleight-of-hand.

This is a bad idea that can only get worse if actually implemented. Then again, maybe people saving for retirement won’t mind paying taxes on their qualified savings now and again when they take income from the savings. That might fly if paying taxes now meant the income they take down the road is tax-free. Like that would happen.

Just like with almost anything else, this is better left alone by government.

I misspoke above. Reducing what one can save/deduct for retirement is obviously a great idea, because so many Americans are quite good at saving large sums on their own. What could possibly go wrong?

I heard he did this so that Congress would have all revenue options on the table. The thing is, Congress doesn’t have a revenue problem, it has a spending problem.

How about we hold a moratorium on all revenue bills next year, and only discuss options to cut spending?

What do you want to bet that congressional pensions will be untouched? Look at their exemption from Obamacare as a guide to how they operate. Outrageous but SOP.

Brady insisted that the tax plan will not eliminate “business deductions for state and local taxes.”

Nor should it. Taxes are a necessary and legitimate business expense, you can’t run a business without paying them, so it would be unfair to pretend otherwise and tax them. Individual taxes are a completely different matter; there’s no more reason to allow them to be deducted than there is for other necessary expenses such as food, clothing, and shelter. So it’s fair to tell people if you don’t want to pay so much to your city or state, move somewhere cheaper.

I’m surprised no one’s suggested taxing 401(k) retirement account assets (or imposing additional taxes on withdrawals from them) so those who saved for retirement can be made to pay for those who didn’t.

Anyone believe Trump when he made his promise that the 401K would be untouched? Really…………

Tax “reform” was not particularly high on my list of reasons to vote for DJT, although now that both of the reasons(ACA repeal & the Wall) I actually voted for him have flopped , I was fine with at least doing something. But the two concrete proposals I’ve heard about, limiting 401(k) contribs and eliminating the state tax deduction (hey, it’s not my fault Illinois is out of control, I voted for Rauner) – would add literally thousands to my tax bill. Let’s cut spending and get rid of the AMT, that’s what I voted for, not some back door dollar grab. It’s like they are literally trying to alienate their core voters, and punish DJT and his voters for shaking up the status quo in the swamp.