This won’t go over well. 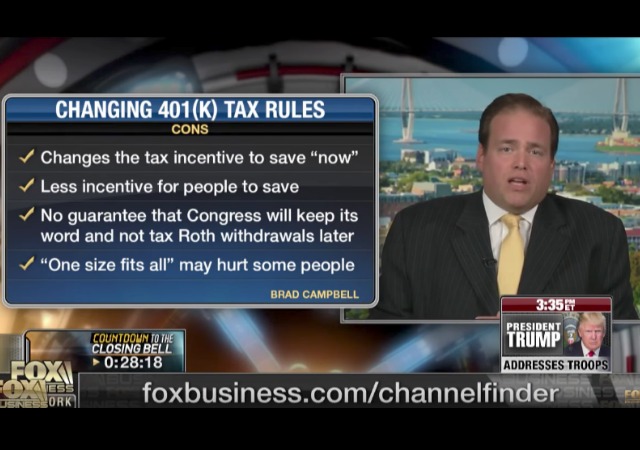 We all know that besides healthcare, tax reform is one of the bigger ideas on President Donald Trump’s agenda. His administration has been screaming tax cuts while the left cries over lost “revenue.” But instead of cutting spending like any sane person would do when caught in a tight budget, the lawmakers have been looking for ways to make up the lost money.

Targeting a person’s 401(k) has been floated around. A possible change includes taxing the earnings before a person places the money into the retirement fund. This has some worried because it could change your tax bracket once you retire and encourage people not to save as much as they usually do.

As of right now, you do not pay taxes on the money in your 401(k). That tax happens when you take money out of it. CNBC reported that the change could change the amount you would pay in taxes and when you pay said taxes:

Advocates of the current tax-deferred 401(k) plan say that “reducing your taxable income this year with your pre-tax contributions is more valuable to you if your expectation is that you will be in a lower tax bracket in retirement,” as CNBC’s Carla Fried reports.

But Fried warns that this doesn’t always amount to the best financial scenario later on. “If the bulk of your retirement savings are in traditional 401(k) plans and individual retirement accounts, the [required minimum distributions] are likely to keep your rate from plummeting, especially once you add in other income sources such as Social Security and, perhaps, a pension,” she writes.

The Washington Examiner said this move is known as Rothification since the 401(k)s would be treated as Roth IRAS.

The Trump administration would likely face opposition from us who have a 401(k), but also from the businesses. From The Washington Examiner:

First, businesses and the retirement planning industry would be at the forefront of that resistance. Many businesses are willing to back a tax bill that eliminate their preferred tax breaks in return for lower rates. But from the financial industry’s perspective, a plan to tax employees’ accounts upfront just to raise revenue on paper could be a bad target.

“We are warning the taxwriters that this could be rolling the dice on retirement security,” said Jill Hoffman, vice president of government affairs for investment management at the Financial Services Roundtable.

Back in 2014, then-Ways and Means Committee Chairman Dave Camp (R-MI)suggested a tax reform bill that included cutting in half contributions to the 401(k) plans. The other half would go into a Roth plan. Employers fear that with a tax up front then people would not save as much. The Washington Examiner explained:

In one scenario, workers could become less interested in employer-sponsored retirement plans altogether, suggested Will Hansen, senior vice president for the ERISA Industry Committee, a group that advocates for large employers on benefits issues. “Those are all just open-end questions right now,” he said.

As with so many other provisions of the tax code, tax preferences for defined-contribution plans enjoy the support of a dedicated coalition that is ready to get to work: The Save Our Savings Coalition, made of several industry groups and large businesses.

Another fear is that this change would not change the change or add as much revenue as the government hopes:

“If the gimmick results in a higher level of debt, then it’s harmful,” said Marc Goldwein, senior policy director for the Committee for a Responsible Federal Budget, a group that advocates for lower deficits.

The issue is that Rothification of 401(k)s would not actually raise revenue, the way that eliminating a tax credit or loophole used by business would. Instead, it would merely shift the timing of when the government received the revenue. As a result, if the tax reform plan, including the gimmick, looked on paper as though it did not add to deficits, could be a big net tax cut. In general, most members of Congress are willing to play such games. But others have resisted similar moves in writing budgets or other legislation.

And in the out years, the Treasury would see lower tax revenue, as people began withdrawing funds from retirement accounts tax-free. “What you’ve basically done is charge the cost of rate reductions to a future generation,” Goldwein said.

Today at The Hill, Robert Reynolds, the president and CEO of Putnam Investments and Great West Financial and owner of Empower Retirement, penned an op-ed against making changes to the 401(k) plans:

Today, savings plans that automatically enroll workers, then automatically escalate their savings to bring them up to rates of 10 percent or more, are already enabling tens of millions of workers to replace 100 percent or more of their work-life incomes. That’s success by any measure, and it depends, above all, on wise plan design, not income. Millions of low and moderate income workers are on track for secure retirement, precisely because the designs of their savings plans make success easy and failure hard. Let’s spread that proven model system-wide.

If Congress would act to ensure savings coverage to all workers, not just some, and support the adoption of successful plan designs, we could solve most of this country’s retirement challenge just by building on and upgrading 401(k)s and other payroll savings plans we already have. The financial and fiscal payoffs of doing that that would be enormous. A 2014 study from Oxford Economics, sponsored by a coalition raging from the U.S. Chamber of Commerce to AARP and the Aspen Institute, found that by offering savings plan access for all American workers and lifting their savings rates to 10 percent and above, the nation’s growth rate and economy could rise by trillions of dollars by 2040.

Better yet, allow people to put as much into their IRAs as they can into their 401Ks. The 401K industry is full of rent-seeking fund managers.

Better still simultaneously scrap all federal income taxes and replace them with a VAT. “Repeal & Replace.”

notamemberofanyorganizedpolicital in reply to Shane. | September 26, 2017 at 1:53 pm

Hey Gooberment Goobers, Revenue has to be EARNED by doing honest work in the free market!

So Government never losses any revenue due to tax cuts.

Nah let the government be greedy and not make hard decisions and then create a huge retirement problem. Then spend billions and billions of tax dollars to try to fix the problem with more rules, regulations and intervention to allegedly fix the problem that was created by government greed in the first place. I am sure that things will be different this time.

You can’t cut revenue without cutting spending. Everybody is quick to talk about tax reform, but I haven’t heard one GOP weasel mention spending control.

The real horror of saving plans is that those used by the ‘more rich’ allow even greater savings.

yes, the differences in SEP, 401K and IRa and Keough are for a reason: Congress and wealthy wrote the laws to favor themselves. Why can I not have a medical savings account if I am on SS? No good reason except they want access to my money. Also I will prob. die sooner without Med Savings.

Yes, what the hell. Let’s deter saving and self dependence by those that work so that we can pay the bill for foodstamps, welfare, disability, govt housing, etc. for those that neither work nor save.

Every policy in this country is being guided by a “Losers First” principle.

People can be amazingly stupid with 401k funds. Switching jobs? Strip the 401k and pay the godawful penalty to have moving money. Do it again? Sure, it has money in it now. Retirement? Hey, where did my money go? (answer: You burned it)

End result? The government has a new sucker class to suck up all the bonds they have to float to keep the can being kicked down the road. A secondary benefit for the government: If they can trick people into allowing that X% to be forfeited to the government on their death, perhaps under the excuse of propping up Social Security, they can *keep* the money.

“Hi! We’re from the GOP and here’s our tax plan in a nutshell – we’re gonna cut your taxes! Yay! And to pay for it, we’re gonna raise new taxes on you! Yay!”

also, I estimate the theft rate at about 50% — that is 50% of our tax dollars are out and out STOLEN by Congress and other politicians and their friends. If this is not the truth, tell me why we don’t know where BHOs trillion $ infrastructure (shovel ready) money went?

Let’s just go full-on communist. If we make the first move, maybe we can get the good apartments before the democrats do.

Touch my Roth and the reason I put that post-tax money into it year after year and I’ll revolt on you whether I voted for you or not.