For a number of years we’ve been documenting anti-Israel activism on U.S. college campuses, carried out by student groups like Students for Justice in Palestine.

In these prior posts we’ve described many instances when this virulent anti-Israelism has crossed over the line into blatant anti-Jewish animus, including at schools like Vassar, Oberlin, University of Illinois and at various California colleges and universities.

It’s important to “unmask” the student chapters, including how some of them traffic in antisemitic tropes, launch attacks against Jewish and Zionist students and Israeli guest speakers, and express support for terrorists and radical Islamist jihadist groups. 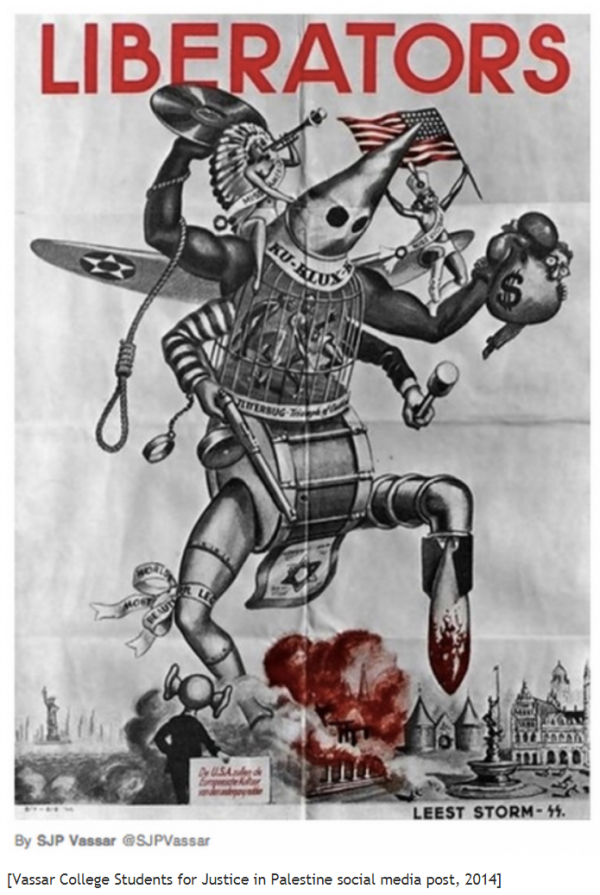 But as we’ve also highlighted in prior posts, it’s anti-Israel and pro-BDS (boycott, divestment, and sanctions) faculty who are the prime factor in driving virulent anti-Israel sentiment on campus, and even antisemitism:

On many, if not most, campuses where there is substantial anti-Israel activity, faculty members are the motivating force and provide continuity. Faculty also indoctrinates students into viewing Israel as the pure oppressor and Palestinians as the pure victims, without any fair historical account of the conflict.”

Students take their cues from faculty, so it’s critical to reveal how and why faculty advocacy leads to a greater likelihood of anti-Zionist student expression and more incidents of anti-Jewish hostility.

Now a new study (pdf.) released on October 24 by the AMCHA Initiative, a Santa Cruz, CA-based non-partisan and non-profit organization that monitors and combats anti-Jewish activity on hundreds of college campuses across the nation, provides the “first empirical evidence” of a clear association between faculty promotion of an academic boycott of Israel and an increase in campus antisemitism.

The Impact of Academic Boycotters of Israel on U.S. Campuses is a 26 page report with 45 footnotes (full disclosure: I read a draft version of the report and provided feedback on it to its lead researchers). 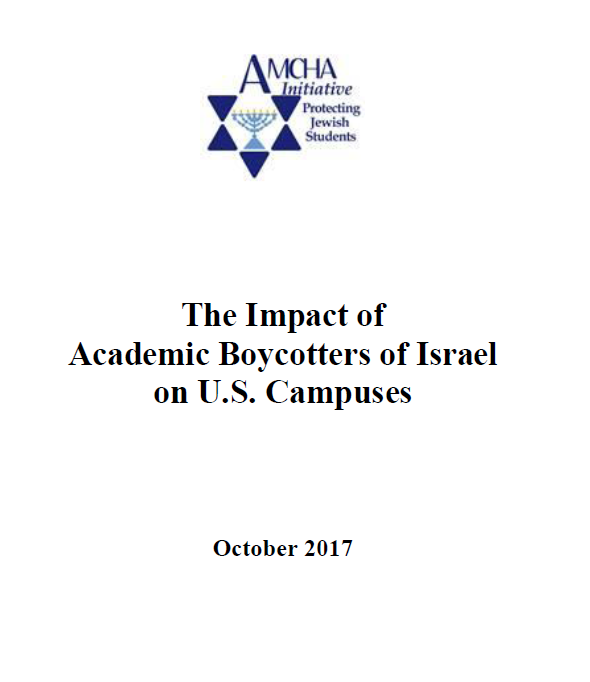 The report builds on AMCHA’s prior studies, which we covered in a post last year, Study documents correlation between campus anti-Israelism and anti-Semitism.

As we discussed, these previous studies revealed a statistically robust correlation between BDS activism and acts of anti-Jewish hostility (including assault, destruction of property, harassment, and suppression of speech) on U.S. campuses with the highest Jewish enrollments.

The association was replicated by AMCHA in three separate studies conducted over different academic calendar years.

But until now, AMCHA wasn’t able to explain exactly why it was happening—which is the focus of the new report.

The new AMCHA study was undertaken by researchers Leila Beckwith, Professor Emeritus at UCLA, renowned scientist, researcher, and statistician with a background in psychology and child development, and Tammi Rossman-Benjamin, expert on antisemitism and former faculty member in Hebrew and Jewish Studies at the University of California. 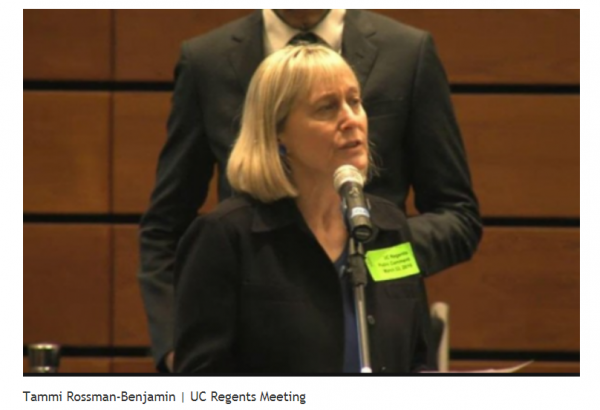 Together they did a meticulous job of scouring the internet to locate faculty boycotters of Israel on over 100 campuses with high Jewish enrollments (faculty were included in the study only if they had signed one or more of the 17 publicly-accessible petitions, letters or statements endorsing or promoting an academic boycott of Israel).

Then, they amassed publicly-accessible information about how these individual faculty members channel their anti-Israel sentiments and BDS advocacy through their departments’ sponsorship of public events on campus that include

Focusing on guest speaker lectures may seem inconsequential. Courses that skew the classroom in an anti-Israel direction are probably worse in terms of their sustained coverage over many weeks of a prejudicial and biased approach, Anti-Israel activism course reinstated at UC Berkeley.

But it’s hard to come by course syllabi because they aren’t always made publicly available. And many faculty boycotters don’t actually teach any classes on the Middle East or the Israeli-Palestinian conflict.

Guest speaker lectures are often high-profile campus events that are heavily promoted with snazzy online publicity, and are thus open to public scrutiny.

They can be tracked and documented in a Large-N study, such as the one AMCHA has completed.

In some respects, guest speaker events can be even better than courses from the perspective of the faculty boycotters. Department sponsorships of these events lend them a gravitas that encourages attendance. So students become a captive audience for anti-Israel and pro-BDS messaging—even if they’ve never taken a class on the topic.

In many cases, faculty also encourage attendance to departmentally-sponsored events by giving extra credits to students for going, and by requiring that they incorporate what they learned from the events into graded papers or credited class discussions. This also confers further academic legitimization on these events (see the AMCHA report, footnote #38).

This matters because the more BDS speakers are hosted at guest speaker events, the more anti-Zionism emerges among students. This, in turn, causes antisemitic hate speech and crime on campus to rise:

Here are some of the study’s specific findings:

There are lots charts and appendices included in the report which break apart the above findings. Here are several: 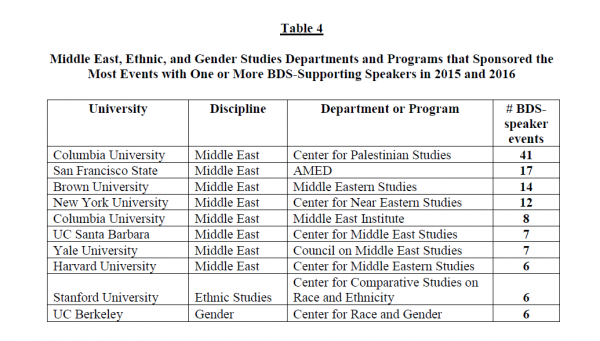 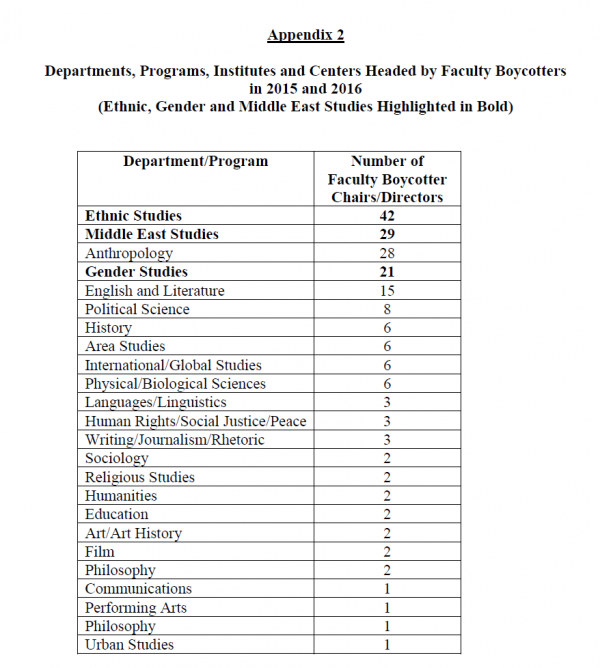 It’s something we knew already, via anecdotal evidence that was already beginning to accumulate. But now AMCHA’s new study shows the extent to which individual faculty members are promoting BDS advocacy and vehemently anti-Israel perspectives by commandeering extramural programming on their campuses.

Beckwith and Rossman-Benjamin surmise that Ethnic and Gender Studies may be involved in this promotion of anti-Israel related events because of the “unique activist nature” of these disciplines.

It may be due to that, or it could be because the predominance of a wacky intersectional theoretical perspective in these disciplines, which demands that totally unrelated “oppressions” be linked together and that Israel be featured as inhibiting social justice for minorities in the U.S.

But whatever the reason, the AMCHA report’s data shows that it’s a trend that has a “corrosive impact on students” and on the “character of the education a campus can provide.”

It’s important to note that the vast majority of the campuses analyzed in AMCHA’s new study are officially on record as opposed to the academic boycott of Israel.

Notwithstanding those official institutional positions, Beckwith and Rossman-Benjamin emphasize that faculty advocacy of BDS shouldn’t be prohibited: “Academic freedom makes it permissible.”

They don’t want to shut down anyone’s advocacy of BDS or his/her anti-Israel perspective. Rather, what they’d like to see is more viewpoint diversity when it comes to the campus discourse on the Middle East and the Israeli-Palestinian conflict.

By packing guest speaker series with only virulently anti-Israel guest lecturers pro-BDS faculty are “shutting down the free flow of ideas.”

That’s probably happening in other ways too, because as the AMCHA report notes, these faculty are likely adopting PACBI (Palestinian Campaign for the Academic and Cultural Boycott of Israel) guidelines for isolating Israeli faculty and graduate students; shutting down student exchange programs with Israel; and working to prevent research and teaching collaboration on projects and events involving Israel’s academy.

The AMCHA report highlights a number of examples of faculty boycotters, some with administrative roles, who have been willing to implement these boycott guidelines at their schools, including California State University, the University of California, and Cornell University.

Sadly, my own campus—Syracuse University—also made it on to the list (see pp. 6-7), along with a brief description of an incident which we covered in a prior post, Syracuse Pro-BDS Faculty Issue Call to ‘Resist’ Events Co-hosted with Israeli Institutions. 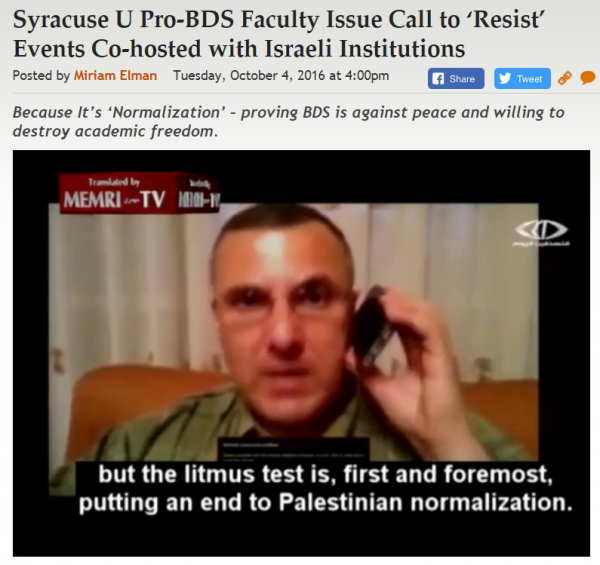 To the best of my knowledge, the SU faculty boycotters were never confronted by campus administrators for calling into question the university’s commitment to academic freedom and freedom of expression. Several colleagues and I, however, did take it upon ourselves to publicly re-confirm these bedrock values of the academy.

The connection between anti-Israel expression and antisemitism on campus seems obvious—when Israelis are dehumanized and Israel is demonized, held to standards applied to no other country on the planet, it’s not all that surprising that this hate also begins to manifest itself towards the Jewish community on campus, and not just towards Israel.

So the latest AMCHA report released this morning really just confirms what we already intuitively know to be true.

Still, it’s helpful to have the data and the statistics to show exactly how the presence of faculty boycotters can be associated with an increase in anti-Zionism among students, and anti-Jewish vitriol and even physical assaults.

Via email, AMCHA’s Tammi Rossman-Benjamin told me that

We hope these findings will raise awareness about the harms that may result from the on-campus promotion or possible implementation of an academic boycott by individual faculty members and academic units, and that it will, in the very least, spark a conversation in academic senates and administrative offices about those harms and how to address them.”

Bottom line: Many anti-Israel faculty who advocate for the academic boycott of Israel are engaging in content discrimination and contributing to a nasty atmosphere for Jews on their campuses. Administrators, trustees, and others who care about fostering learning environments supportive of the Jewish community and open to robust intellectual inquiry should take note of AMCHA Initiative’s new study.

we are at war and i for one will not hesitate to fight fire with fire –
this is not the 1930s where my famioly was almost totally wiped out by these bastards (so called jews as well as the pro islam bastards).

SOROS /tsuris/ fsmily needs to be outed every day for the anti Jewish turd that they are.

he was weaned from a baby in Hungary on the vile self hate of all things jewish – may he burn ion the everlasting flames of hell!

Excellent, Miriam, as pretty much always.

Thanks so much! An important study & I hope that administrators, trustees especially take it seriously.

That Vasser ‘artwork’ is straight out of Nazi comic published by executed war criminal, Julius Streicher.

“Streicher paid particular attention to the instruction and perversion of the children and youth of Germany. He was not content with inciting the German population. He started to poison the minds of the children at school at the earliest possible date. He continually emphasized the need for teaching children antisemitism: “I repeat, we demand the transformation of the school into a national German institution of education. If we let German children be taught by German teachers, then we shall have laid the foundations for the national German school. This national German school must teach racial doctrine.”

“We demand, therefore, the introduction of racial doctrine into the school.”

“‘Do you know who the Devil is,’ he asked his breathlessly listening audience. ‘The Jew, the Jew,’ resounded from a thousand children’s voices.”

“No one should be allowed to grow up in the midst of our people without this knowledge of the monstrous character and dangerousness of the Jew.”

“Der Stürmer” is now being published at Vassar.

This, and ‘former’ Nazi george soros funding this hate with 8 billion dollars? Who said the Nazis lost the war?

I say fight hate with humor, every time there is a BDS demonstration on campus, some one should be screening the collective works of Mel Brooks right across from them. The absurdity alone would be enough to kill any support they might have gained.