“anti-Israel groups are explicit in their appeal to racial animus”

“anti-Israel groups are explicit in their appeal to racial animus”

My interview in the Baltimore Jewish family magazine Where What When. 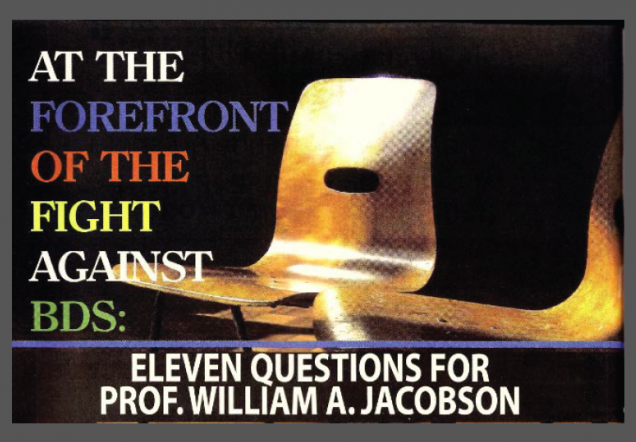 I was interviewed recently by Legal Insurrection reader Dr. Kenneth Friedman, for the Baltimore Jewish family magazine, Where What When:

The WHERE WHAT WHEN is a monthly family magazine of Jewish information, inspiration, and opinion. Established in 1985, it is Baltimore’s liveliest Jewish magazine, approximate readership is 40,000. The Where What When is directed to the wide spectrum of Baltimore’s Jewish population and has become a powerful voice in the community.

The topic was the Boycott, Divestment and Sanctions movement. Here is the full interview, At the Forefront of the Fight against BDS: Eleven Questions for Prof. William A. Jacobson:

KF: Talk a little bit about how you got involved as an activist and particularly as it pertains to the fight against BDS.

WJ: My work fighting the boycott movement wasn’t planned; it just happened. I started “Legal Insurrection” in October 2008, and for the first several years, the main focus was domestic politics. While I always covered Israel and anti-Israel groups, as far as BDS was concerned, the coverage was mostly of the actions of groups that ran flash mobs in stores to boycott Israeli goods. While malicious in intent, those groups were mostly so fringe as to be almost laughable.

But in 2013, the fringe moved its way into faculty association groups, starting with the Association for Asian American Studies in the spring of 2013. I covered the AAAS resolution endorsing the boycott, but few paid attention to my warnings, because it was such a small group. I saw the pattern being established of radical anti-Israel faculty taking over professional faculty groups. That pattern repeated itself in late 2013 at the American Studies Association.

ASA was the wake-up call for many of those opposed to academic boycotts, but in many ways it was too late to stop the process at faculty organizations, where the multi-year takeover process was well underway.

Because such systematic academic boycotts are deemed by the American Association of University Professors to be a violation of academic freedom, these boycott resolutions are serious business and threaten the entire academic system. They are not something that can be ignored even if, so far, there is little actual impact on Israel.

KF: What are some of the new tactics being employed by anti-Israel activists on college campuses?

WJ: I’ve noticed the tactics getting more aggressive. Shout-downs and disruptions of events now seem common, including high-profile cases, such as the Israeli professor at the University of Minnesota Law School and the Israel Studies Professor at UT-Austin. But there are many lesser disruptions that send a message to pro-Israel students that their views are not welcome on campus.

KF: What steps can be taken to fight the university professional organizations endorsing academic boycotts against Israel?

WJ: The boycott resolutions need to be fought from within, regardless of how one feels about Israel. These resolutions are violations of academic freedom for everyone, including students. So if you are in academia, you need to get involved. For too long, the most motivated people, the Israel-haters, have had a free run. But the reality is that the anti-Israel faculty are so entrenched in some organizations that appealing to reason is futile. BDS is war by other means.

But beyond that, there’s a relatively simple congressional solution, which is to stop the abuse of tax-exempt status. I challenged the ASA’s tax-exempt status on the ground that an academic boycott is not exempt activity under the IRS Code and regulations, but I have not yet received a ruling. Congress can pass a simple change in the IRS Code to make it clear that participating in an academic boycott – against any country, except as required by law – is not exempt activity, and, therefore, a tax-exempt entity puts its status at risk by engaging in such non-exempt activity. Contact your congressmen and senators. This clearly would be constitutional, since no one has a right to a tax exemption, except under the limitations imposed by Congress, which already restricts some types of activities for 501(c)(3) entities. Taxpayers should not subsidize activity that threatens the educational system.

KF: Why is today’s college campus so fertile for the BDS movement?

WJ: The faculty. The faculty. The faculty. Particularly in the humanities and social sciences, where Israel regularly is portrayed as an illegitimate “settler colonial state,” without any recognition of the historical connection and rights of the Jewish people, rights that have been recognized in international law since the League of Nations in the early 1920s. On many, if not most, campuses where there is substantial anti-Israel activity, faculty members are the motivating force and provide continuity. Faculty also indoctrinates students into viewing Israel as the pure oppressor and Palestinians as the pure victims, without any fair historical account of the conflict.

KF: Is there any connection between some of the protests of African-American students and the anti-Israel movement in universities such as Missouri, CUNY, and, locally, at Towson?

WJ: There has been a concerted effort by anti-Israel groups to make a connection between the struggle of African-Americans and Palestinians, and to hijack the Black Lives Matter movement. In fact, this is the single biggest push by anti-Israel groups since the Ferguson riots. The anti-Israel groups are explicit in their appeal to racial animus, portraying Israel as “white” and making false claims that Israel is responsible for alleged police misconduct in the U.S.

I was the first to call attention to this development during the Ferguson riots, when anti-Israel groups embedded themselves in the protests and tried to turn the riots into anti-Israel protests. It has continued and picked up speed and is now a prime focus of the BDS movement.

KF: Why has the BDS movement begun to attack non-Israeli individuals, such as the Jewish reggae artist Matisyahu?

WJ: You have to understand that BDS is about the destruction of Israel. Anyone seen as supporting Israel is a potential target, and if the BDS war against Israel means destroying artistic freedom – just as they destroy academic freedom – it’s just collateral damage to them. I can’t emphasize enough for your readers just how craven and destructive the BDS movement is. It is a threat to everyone, not just Israel.

KF: What can universities do to protect their pro-Israel faculty from these assaults?

WJ: Universities already have the mechanisms in place, such as campus codes precluding discrimination on the basis of national origin and religion, and protecting freedom of speech against shout-downs and similar disruptions. The issue that is harder to deal with is the implicit bias against students and faculty who do not toe the anti-Israel line.

KF: What should the typical Jewish kid on campus do, particularly in very anti-Israel environments?

WJ: Do what you want to do. Don’t be intimidated. Participate in pro-Israel or at least balanced groups. But if you are subjected to abuse, insist that the university enforce its policies of fairness to everyone. Parents and alumni play a key role in providing support for students, and need to make it known to administrators and trustees when a situation arises in which students are on the receiving end of abuse from BDS supporters.

KF: What can the pro-Israel community do to help?

WJ: The current situation did not happen overnight, and it cannot be solved overnight. This was a generation in the making on campuses. So it’s not enough just to fight BDS resolutions, there has to be pressure for a realignment of the campus culture towards a balanced approach to the conflict and away from the anti-Israel propaganda that now pervades academia.

One way to realign that culture is to expand ties between American and Israeli universities. Earmark your donations to programs that treat Israel fairly and that foster cooperation. Instead of putting your name on a classroom or building, endow a program for the exchange of students and faculty with Israeli universities and other means of cooperation. Build ties faster than BDS can destroy them.

KF: How does the new climate of “microagressions” relate to BDS?

WJ: I don’t think it does, logically, though anti-Israel groups are trying to exploit racial disputes to turn them against Israel. So expect the same hijacking, as is taking place of the anti-microaggression movement, of Black Lives Matter.

KF: What of the decision of the European Union to issue guidelines on labeling “goods from Israeli settlements?”

WJ: That decision signifies the threat BDS poses in the long run. Israel’s economy is strong, and academic boycotts by groups you never heard of will not harm Israel in themselves. But they are part of the movement to isolate Israel in the hope that governments and large corporations will join. That’s why academic BDS needs to be fought; not just because it’s malicious and a violation of academic freedom, but because it is one brick in the wall being built around Israel by people who seek its destruction.

Here is one organization that is doing something to help.

Israel needs to bar all the BDS types from entry to Israel for life. Then Israel needs to formerly break 100% of all relations with said academic institutions forever and 100% of their staffs out of Israel

“forever” is a long time.
How about attacking their hypocritical, discriminatory, illegal practices in the marketplace of ideas (& Courts), while at the same time recognizing why the 2nd Amendment exists.