Attacker and his family will get benefits from Palestinian Authority paid in part by U.S. taxpayers. 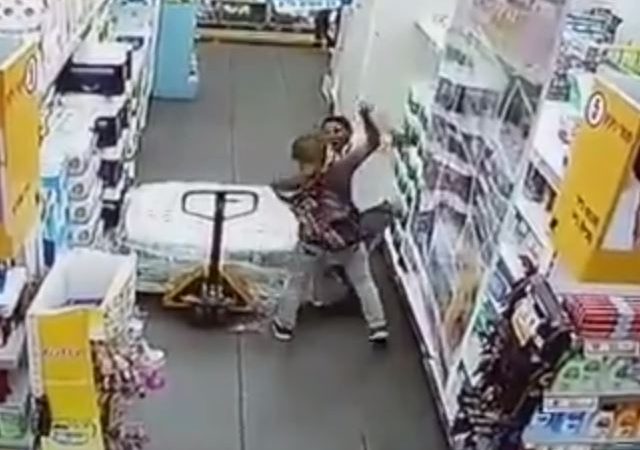 Yesterday a Palestinian terrorist stabbed an Israeli in a supermarket in the Israeli town of Yavneh.

We have seen Palestinian knifing attacks a lot in recent years, as part of the so-called Knife Intifada. The savagery includes numerous instances of women and families knifed in their homes by intruders who often are teenagers incited by Palestinian Authority and social media. Among the many knifing attacks we have covered is the knife attack on a family while having Sabbath dinner and a 13-year old Israeli girl stabbed to death in bed by 17-year old Arab terrorist.

The Yavneh attack took place when a West Bank Palestinian employee of a supermarket in Israel turned on an Israeli co-worker.  Israel National News reported:

A 43-year-old man was severely wounded in a Yavneh supermarket on Wednesday morning, and police suspect the attack may have been nationalistically motivated.

Yavneh is a city in central Israel.

“When I arrived at the scene they showed me inside,” MDA paramedic Itzik Yom Tov said. “I saw a man in his 40s laying conscious on the floor, with stab wounds on his upper body. We administered lifesaving medical treatment, bandaged his wounds and stopped the bleeding. We transferred the victim to Kaplan Hospital in severe condition.”

“The stabber lives in Judea and Samaria, and he is currently being interrogated. We are investigating the incident.”

Video of the attack was released today, via Times of Israel:

Authorities release footage of an apparent terror attack earlier today in which a Palestinian teenager stabbed and critically injured an Israeli supermarket employee.

Graphic security camera footage from inside the Shufersal store shows a 19-year-old Palestinian man from the West Bank city of Nablus begin stabbing the 43-year-old as he stocked shelves.

After the employee’s back was turned, the attacker can be seen drawing a knife and stabbing the man in the upper body several times.

The attacker was captured and was not neutralized on the spot. Dead or alive, he and his family will receive payments from the Palestinian Authority, funded in part with U.S. taxpayer dollars. (Related, see our post on Taylor Force Act.)

The attacker also will be treated as a hero in Palestinian society, and among leftist and Islamist anti-Israel activists.

I’m totally sick and tired of America supporting terrorist countries around the world, both by outright grants of money or purchasing ‘goods & services’ (like oil for the Saudi’s). How is it possible that America can do the ‘right’ thing while sitting down to eat with ‘wolves and jackals’?

“….while sitting down to eat with ‘wolves and jackals’?”

Hey man, there are worse wolves and jackals inside our government. One just left high office, and one running for president was just told to go to hell. (And that was just Jeb! Bush.)

They act like savages towards their fellow man and then they portray themselves as victims to the rest of the world. It’s hard to understand how so many people buy in to the Palestinian lies.

Here’s why they buy into defending the savages:

America, if it’s destroyed, will be destroyed from within.

Take every terrorist’s body and grind it up with a dead pig. Muslims believe that this would prevent them from ever going to heaven. Then feed the terrorist/pig mixture to a pack of dogs until completely consumed. Give the dog poo to the family of the terrorist for burial. Do the same for the bodies of rioters.

Who exactly ALLOWED US Taxpayer money to go to the PA ?? Was is the demoCraps or Republicans or Both ??? That Money must be stopped immediately.