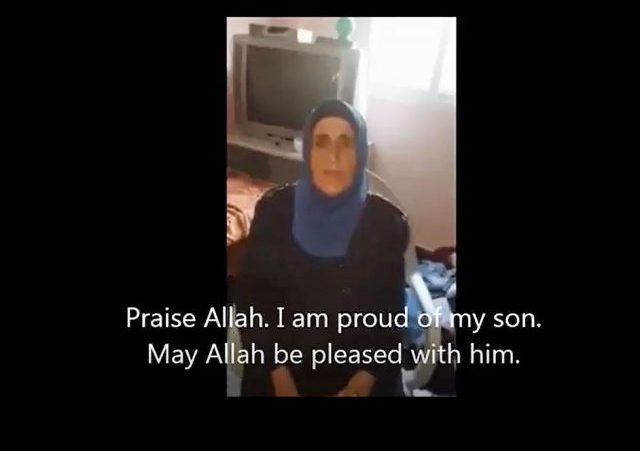 Yesterday there was another savage attack on an Israeli family by a Palestinian intruder who entered the house and butchered as many people as he could before being shot.

The attack comes amid increasing incitement to violence after Israel installed metal detectors leading to the Temple Mount, after two Israeli policemen were killed by terrorists who hid their weapons in and around al-Aqsa Mosque. We detailed that attack and the incitement in our post, Palestinian “Day of Rage” ends the way all their other Days of Rage ended.

We covered many such similar attacks, including the murder of the Fogel family, including infant Hadar in her crib, and more recently, the knifing to death of Hallel Yaffa Ariel, which we covered in 13-year old Israeli girl stabbed to death in bed by 17-year old Arab terrorist. It is not a coincidence that many of these attacks are carried out by minors, given the incitement to violence against Jews in Palestinian Arab media, political spheres, social media, and schools, focused on “children”:

The Times of Israel has the details of this attack:

The family had gathered for a Friday night Shabbat dinner to celebrate the birth that morning of a grandchild.

The Shabbat table was covered with a bright white tablecloth, laden with snacks, bottles of cola and an unopened bottle of whiskey.

They were waiting for other guests to arrive, the door of their home at the settlement of Halamish apparently open.

Instead, a 19-year old Palestinian, Omar al-Abed, from a nearby village, burst in armed with a large knife and began stabbing the members of the family. There were apparently 10 people in the house when he entered.

He killed the grandfather of the family, Yosef Salomon, 70, his daughter Chaya Salomon, 46, and son Elad Salomon, 36.

His wife Tova, 68, was seriously wounded and taken to the Shaare Zedek Medical Center in Jerusalem where she underwent surgery on Saturday morning. When she came out, she was given the bitter news — her husband and two of their children were dead.

The couple are survived by three other children; it was the youngest who wife had given birth to the new grandchild that morning.

As Abed continued to stab the victims, the slain son’s wife managed to rush several small children to a nearby room and lock the door. She called the police and screamed for help.

A neighbor, who serves in an elite IDF unit, heard the cries and rushed over, shooting the terrorist through the window of the house.

Elad and Michal Solomon. Michal managed to hide their five children in another room as Elad was murdered at their Shabbat dinner last night. pic.twitter.com/X3iTnEfdHR

The killer posted on Facebook before he carried out his attack.

Before killing 3 Israelis and wounding a 4th tonight in a heinous act of terror, the terrorist posted this message on Facebook. pic.twitter.com/TNxvQ5IKnO

The scene was particularly bloody:

Warning: Graphic Content – This is the scene of the Sabbath massacre which killed 3 Israelis and wounded 1 other. pic.twitter.com/YpsecdoYTc

And this is the Palestinian terrorist, lying handcuffed on the kitchen floor at the home of the Israeli family that he butchered last night pic.twitter.com/Bo8Hx1BWVb

Hamas leader Ismail Haniyeh phoned the father of the Palestinian who carried out Halamish attack: 'Your son brought pride to the nation.' pic.twitter.com/G5bygnBOj8

The killer was captured and is being treated in an Israeli hospital:

And the killers mother, in a phenomenon we see over and over, expressed joy in her sons actions:

Israel should insist on equal access and charge the Arabs/Muslims of discrimination and violation of human rights of the right to travel and practice religion.

Israel should declare a day of rage, and proclaim it’s time for the rest of the world to object to Palestinians acting like children and using violence to try and intimidate their way.

Anti-Israel social justice warriors pretend not to know that Palestinians celebrate the most horrific, that families are paid for this by the state, and that motherhood comes second to the morbid teachings of their faith. Remind of anyone?

Wonder what Linda Sarsour would say if her child did the same?

“Wonder what Linda Sarsourpuss would say if her child did the same?…”

Israel should be dropping fuel-air bombs, one on the home of Hamas leader and one on the home of this terrorist’s family. Each subsequent attack should result be met with an increase of ten fold as many of those bombs. Clean out the vermin with free cremations.

I am pretty certain the Russians would kill “X” number of generations before and after the “jihadist”. For example, your parents, grandparents, children, and grandchildren would be killed if one perpetrated something like this, Harsh, but effective.

Probably as effective without having to murder children:
I would take no terrorist prisoners, and I would make sure to bury them hugging a pig.

How about a sex change operation, followed by two years of him doing penance in a male prison, video streamed, and then execution by being fed to pigs?

Like Imperial Japanese soldiers (and some formations of Germans), you just have to kill people who are this conditioned as part of their “culture”.

That’s just how it is.

The Texas, “I reckon he just needed killin” defense?

1861 – “I was satisfied and have been all the time, that the problem of war consists in the awful fact that the present class of men who rule the south must be killed outright than in conquest of territory.”

Letter, January 1864: “A people who will persevere in war beyond a certain limit ought to know the consequences. Many, many peoples with less pertinacity have been wiped out of national existence.”

Sherman was wrong about the South.

He was harsh, and had little mercy, and lest sympathy.

But he also understood more clearly than anyone else at that time (except possibly Grant) what had to be done for it to end. War isn’t about convincing the other side that you’re right – war is about murdering enough tens of thousands that no one dares to tell you you’re wrong. In our modern, moralistic era, we hate to admit that’s what it comes down to. But that’s why we have so much trouble winning wars now.

There’s no such thing as “right” or “wrong” at the end of any war – there’s only the living, and the dead.

‘…the present class of men…” surrendered and went home to what ruins they could find. Lee went on to serve as president of the Washinton College, and continued to live a highly honorable and productive life. He was a leading voice for reconciliation.

Not the kind of people you have to kill because of conditioning. Sherman was wrong.

Look at the sickening crowds cheering and dancing. A MOAB dropped right in the middle of the celebration would be justifiable.

The next murderer may be dissuaded -if not, certainly there will not be any more celebrations.

Flood their tunnels, bomb their celebrations and sniper off the stragglers. It’s time to end this slaughter. SO WHAT if the Palestinian leadership signs some piece of paper, claiming peace? Their people are conditioned to hate, trained to hate, and are members of a religion of hate. Kill the Palestinians ASAP – scour them from the earth.

I think we should stop calling them Palestinians. Philistines were extinct long before this phoney ethnicity was invented. These “people” are Arabs, not Greeks, and should be referred to as such.

Immigrant rights. Perhaps he/she/it was a victim of apartheid or separation… of civilization and terrorism.

Does that still justify a social justice adventure and mass abortion of the native population(s)?

This is South Africa, Serbia, or perhaps Ukraine, recycled.

Time to feed the bodies of terrorists to pigs and return pig shit to the family.

Charge them for the shit.

It is way past the time to expel EVERY MUSLIM from civilized countries. They have 57 Muslim states where they can kill, rape, and torture each other. All Muslim camelhumpers out!!

It is beyond me how anyone cannot see this as pure EVIL.

The “Ends justify the means” philosophy supported by “God’s will” thinking (“thinking” used loosely here) can justify any evil. Then, embed that in a “Save yourself” religion, and you have raw evil in action. The “Religion of peace” is just a pure lie for any Westerner stupid enough to believe it.

Any the democrats want this evil in this country. That too is evil.

you can blame George W for ‘the religion of peas (and farts)
bull pucky – once a oilman always a oilman.

i used to think highly of him – but NO MORE excuses for the ‘religion’ of Antisemitism, anti Christianity, anti civilized behavior – of stoning,. beheading,. FGM and much more PURE EVIL

I read that Israel does have a death penalty, rarely used. I wonder if this qualifies. I certainly hope so.

It does, but it’s only been used once, and there is zero chance of it ever being used again, at least as long as the current self-selecting judiciary remains in control.

Islam is a religion of peace is the drumbeat from media, progressives, Muslims. Explain to me how a religion of peace can be twisted so much as to produce the terror, suffering and injury to innocent women and children. And are those people dancing in the streets celebrating a peaceful act? If terrorists are just few in number why are so many people celebrating murders of innocents? I am sure we will hear a condemnation of this horrible crime from Imams. ………………….crickets

The bankrupt product of a morally, intellectually and spiritually bankrupt ideology, a totalitarian ideology of hate.

But, of course, here in the U.S., certain members of the LGBT community are unabashedly banning the star of David from sundry marches, as an alleged “Zionist” symbol of oppression. Anti-semitism rises anew amongst the jackboot Left.

Islam is currently more of an abomination that a religion

These heathens are the spawn of Satan and there needs to be a permanent open season on all of them. No bag limit, no license required.

Pals are doomed subsequent to driving generations of children insane with hate. There is no reversing mass homicidal behavior; they’re stuck with this for a thousand years to come. The mother of all boomerangs.

Not according to history.

Imperial Japanese troops were…if anything…worse. But once the spell was broken, they actually adjusted to reality pretty well. And in a remarkably short time, too.